Joan Fabian and the Hunting Prize 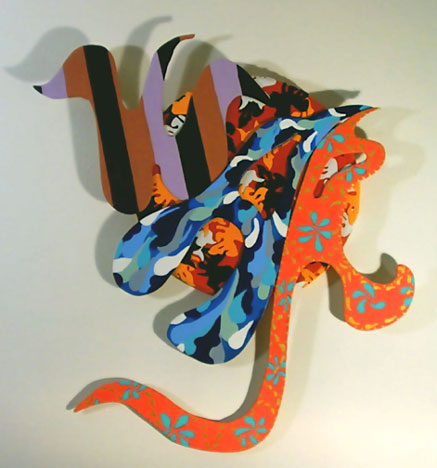 This painting by Joan Fabian was entered into the into the Hunting Prize, where she was one of the artists on their "short list." As I understand it, that means she made it through the first round of judging, in which she had sent them a digital image of the piece, they decided they liked it, and asked for the original to be sent. She sent the piece to them, at considerable expense. At this point, she was disqualified. Why?


I contacted one of the jurors, who were going to chose pieces by viewing the actual works, and he said they never seen my piece. I called a representative of Hunting and she told me that they had nothing to do with the disqualification process and that it was the jurors that did the disqualifying because it wasn't a "painting".

Way to dodge responsibility guys! Now this is admittedly a grey area. On the other hand, artists have been painting on shaped canvases and shaped pieces of wood for a long time, and if such a work was not a painting as far as the Hunting Prize is concerned, it should have been either 1) more clearly spelled out in the rules, or 2) disqualified when she sent the digital file in.

So what's the big controversy? It has been suggested that the shaped wooden nature of the painting is not the problem, but the subject. In the jaundiced opinion of local art blog B.S. Houston, Hunting is a prize that exist for the purpose of "impressing very-very wealthy oil executives and their wives." He also points our that the sign up sheet requires you to acknowledge that


Any artwork that includes the use of bodily fluids, degradation of religion or government, and/or depiction of sexual acts or any other medium, presentation or topic objectionable to Hunting PLC will be automatically disqualified from the competition.

So here's the possibly nefarious disqualification. Maybe the Hunting Prize people didn't see the word "WAR" when they got the digital file (I didn't see it at first, either), and when they opened the crate . . . whoops. (Why the word "WAR" should be offensive is another issue, but Hunting seems pretty damn sensitive about potential offense.)

What do I think? Well, whatever their reason for disqualifying the work, they did wrong by Joan Fabian, who went through a lot of expense to have a crate built for the piece and to ship it, at the request of the Hunting Prize. Also, the Hunting Prize folks need to loosen up a bit. And finally, impressing oil executives and their wives (and husbands) is worth doing--also educating them about art. If you are an artist trying to make a living from art in Texas, these people will be among your customers. So as an artist, you need to reach out to them in some way. They don't all have bad taste after all--Jean and Dominique DeMenil proved that.

For me, as a disinterested observer of this scene, I got introduced to an interesting artist. Joan Fabian's work reminds me of a stew of Jim Nutt, Lari Pittman, Elizabeth Murray, and Frank Stella. So on that note, let's close with another one of her paintings. 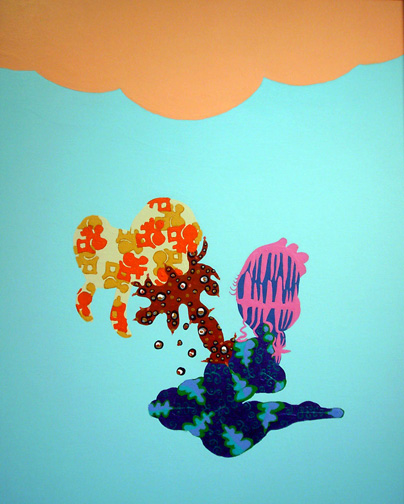 Update: In the comments, an artist named Carlos tells a similar story:


I have also been given the boot by the HAP folks. The word that I got was that my work was too-3-D...

Yes, it is made up of objects and brakes the plane of the 2-d format. Yes,I did include all dimensions and materials used. Yes, I did spend a large amount of money to ship the work to Houston, Yes, I have to spend more money to get the work back.

This suggests the problem they had with Fabian's work was its three dimensionality, not its politics. But it also suggest the Hunting Prize folks didn't pay much attention to the digital files and information the artists submitted about their pieces. I wonder if any other painters who submitted "non-flat" works were rejected?

2nd Update: You can see Carlos Cuevas' rejected piece here. It has a bit of an Ed Kienholz/Michael Tracy vibe, though without either of those two artists' intensity. B.S. Houston still thinks it was the "offensive" nature of the works that got them rejected. Cuevas's assemblage has some religious elements, but doesn't seem particularly offensive to me. (But the Hunting Art Prize people may be exceptionally sensitive to possible offense, for all I know.) At the same time, HAP must have been blind not to see that this was essentially a mixed media three dimensional work when they got the slide. Curiouser and curiouser!