The Big Show at Lawndale

As I understand it, Lawndale has been doing "The Big Show" every year for the past 30 years. I don't know if the format has always been the same though. This version of it featured works by a whole bunch of artists from the Houston area. They were chosen by a guest curator from St. Louis from works by 409 artists who entered works (and paid an entry fee for the privilege). The show on the walls is what Laura Fried picked. You can see it until August 8.

I don't have any idea what was rejected from the show, but I was surprised by the number of paintings (as opposed to sculptures or video or installations or mixed media work). I was surprised by the number of basically realist paintings, or paintings that used elements of realism within postmodern contexts. It seems like a really conservative show over-all. That's OK. I was impressed by the painting prowess of Houston. 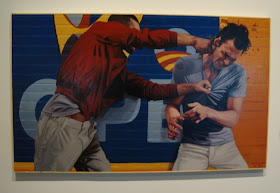 Like this amusing painting byt Kevin Peterson. The artist assures us that the man on the left is not meant to be Obama, and that indeed both men are white. He made this statement at a slide show given by the artists. Not all the artists spoke, though. I am pretty sure we didn't hear from Michael Arcieri, for example. 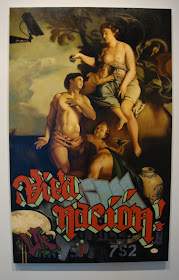 The idea here is kind of cheesy, juxtapozing a baroque style painting with grafitti. I think he may be suggesting that the two modes of expression are both highly coded in ways that their intended audiences would understand easily, even if they are opaque to 21st century gallery goers. I just like the contrast between the flatness of the grafitti and the depth and roundness of the baroque figures. 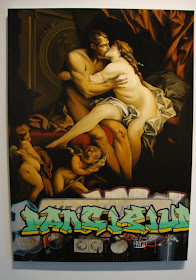 Grafitti played a part in several pieces. Street art has come a long way since I was doing pieces in the early 80s. I like the way David Cobb painted an illusionistic depiction of basically flat grafitti here, and I like the feel of the railyard. 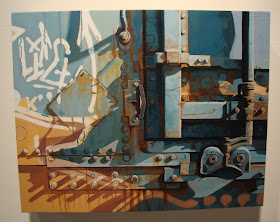 
Mindy Kober showed slides of her work over time (as many of the artists did). Her work began being done mostly with gouache but she recently changed to using crayon. 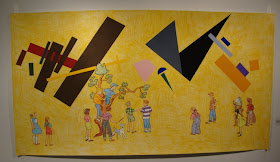 Mindy Kober, Contemplating the Universe, crayon and gouache on paper, 2009

The reason she gave was simple--crayons were cheaper than gouche. The recession has hit everyone hard, hey.

Jed Foronda was one of the slide show artists. He showed a lot of older work that seemed fairly loud and colorful, a little like Ben Jones, but now, as he put it, "painting wasn't working" for him anymore. What he was doing now was excavating magazines with a sharp knife, creating these debossed objects that, in contrast to the earlier work in his slides, seem quite elegant. 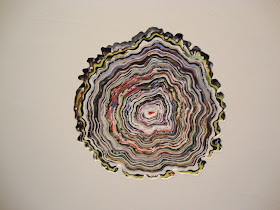 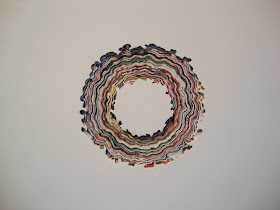 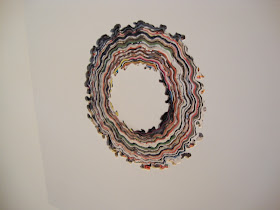 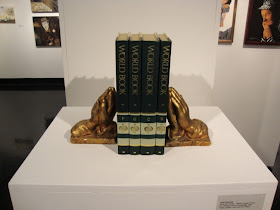 There are a couple of punks in the show. This by John Runnels piece amused me. It was also one of the few sculptural pieces in the show.

Jasmyne Graybill managed to get three sculptures in the show. Well-deserved--these pieces are astonishing (and really disgusting in a totally surprising way). 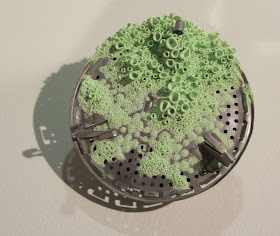 This is art you can almost smell--musty, gag-inducing. The craftsmanship is astonishing. 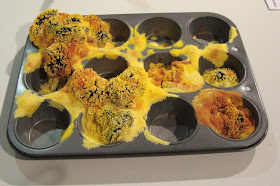 I love them. Perfect art for the kitchen!

Over all, the artists seemed too smart. Lots of references to other art and to art history were worn too close to the surface. When the artists spoke, they often spoke of "exploring issues around" this or that. I kept waiting for someone to say, "I paint X because I like X." For all the skill shown here, I didn't feel much. Even the political pieces seemed old hat. I saw reflections of art from New York and elsewhere, filtered through BFA and MFA programs. This may be unfair because I know not all the artists come out of that world of university art education. And I liked a lot of the work! I just wasn't blown away by much, and maybe part of the reason for that was hearing the artists speak about their work. Maybe that was a mistake.

The earnest, intelligent artist statements perhaps gave me extra appreciation for Jim Nolan's slide presentation. He described his work as post-minimalist, and name-checked one of my least favorite artists of the 80s, Joel Shapiro, but in contrast to so many of the artist here, he felt free to declare, "I try to stay away from craftsmanship as much as possible." After all, he added, "if you spend a lot of time on something, does it get better?"
Robert Boyd at 7:57 PM
Share