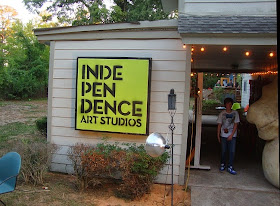 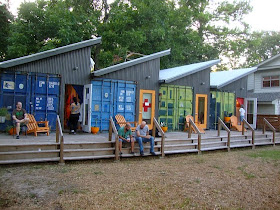 These are the studios. (You can't see it well here, but to the right is a big house. The lots on the streets in this neighborhood are enormous.) The studios are owned and run by the Cullar-Ledfords--Thedra Cullar-Ledford and her husband Stephen Cullar-Ledford. I didn't meet them when I stopped by, but I have a strong feeling for Stephen--he went to the Jones School for an MBA (as did I) and works for a natural gas E&P, as do I, and does an big art thing on the side! (Independence Art Studios for him, Pan for me.)

The studios are made out of old containers, and are quite roomy inside--long and thin, with a tiny loft space for storage. One artist, Jon Clark, lives in his space. 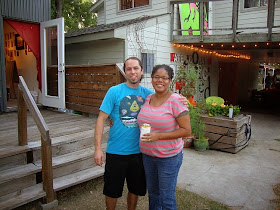 Jon Clark and Chasity Sophus Porter, who also has a studio there, posed for me. Clark had amazing piece of sculpture on the front lawn--another wooden nautilus shape. 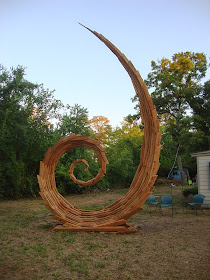 Ok, I was pretty impressed by what the Cullar-Ledfords had done. They have a thriving art colony going! Check out their website. But as I mentioned, it was a neighborhood I had never really seen. So out of curiosity, I thought I'd drive around and see what else was there. So I went one block south to Martin St. and my mind was blown. 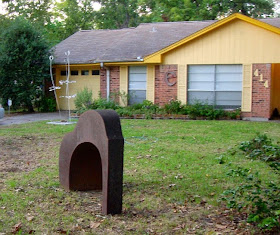 This nondescript house had a brilliant blue sculpture by Lee Littlefield in front of it. (I'm sorry I don't have a photo, but the photos I took were out of focus.) And their front yard was chock full of abstract sculptures. 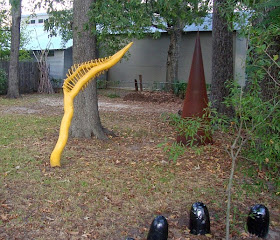 The yellow sculpture looked like another Lee Littlefield, and it seemed like there was a third in the back yard. 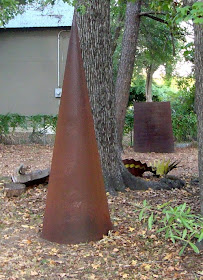 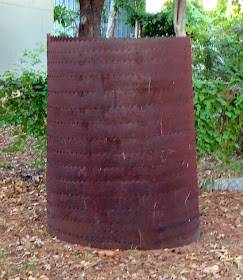 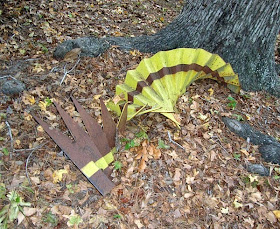 This is an amazing collection of sculpture, and there's even more than what I've photographed! Except for the pieces that are obviously by Lee Littlefield, I have no idea who created these works. Can any Pan readers identify them?

But wait--that's not all. There were just as many sculptures in the yards of three houses across the street. I didn't get as many photos because the sculptures were further back in the property, and I didn't want to skulk around in case they were shoot-first-ask-questions-later types. But here are a couple of photos. 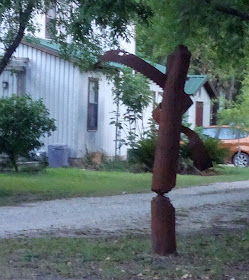 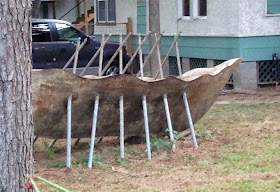 These sculptures appeared to be at the addresses 331, 331 1/2, 405 and 414 Martin St. I was curious as to who owned them, but I didn't think to knock on the doors and ask. So I thought I'd do the next best thing--look them up on HCAD, Harris County's internet accessible property database.

And what do you know--Lee and Eliza Littlefield live at 414 Martin Street. Those sculptures look like Lee Littlefield sculptures for a good reason! Someone named Brian Owens owns the property at 331 Martin, which has two really nice looking houses on it as well as lots of sculpture. His name doesn't mean anything to me, but he may be renting houses to artists there. 405 Martin is owned by Magdalene Boltz-Topp, who is also an artist. But that's not all--according to HCAD, sculptors Paul Kittleson and Carter Ernst co-own the property right next door to the Littlefields.

So with Independence Art Studios on Janisch Rd., and a whole bunch of sculptors on Martin St., I think we can say that this is a little hidden art neighborhood. And if it follows the pattern of other art neighborhoods like Montrose and Rice Military, in 25 years or so, it will be full of expensive townhomes. So my advice is to buy now--or at least take a drive over past the Littlefield's home--it's worth checking out.