Waiting for a phone call from the Big Show

I did my best not to think about the jurying of this year's Big Show this past weekend. As I discussed in my post last week, the odds are heavily against you given the sheer amount of work usually submitted. Lawndale tweeted out late Thursday that they estimated having received 915 works by 381 artists, which are both the lowest marks in each category over the past six years. The odds suddenly seemed better, however marginally so.

Sunday was Call Day, when Lawndale reaches out to the artists who had work accepted. No phone call = not accepted. I wasn't sure when to expect a potential call until I happened upon a noon-time tweet from Lawndale that said they were beginning to notify accepted artists. Even though my phone's ringer was on, I found myself keeping my phone in my hand and checking the screen every few minutes. 10 minutes passed, then 15, then 20. It was at this point I started drafting this post in my head.

Alas, a little bit over an hour after their initial tweet, Lawndale tweeted again, saying all accepted artists had been notified. My phone never made a peep.


I wasn't the only artist to get shut out, of course; Lawndale revealed that juror Marco Antonini (of Brooklyn's NURTUREArt) selected 69 works from 61 artists, meaning 329 other artists also missed out on a congratulatory phone call. The number of artists and works selected by Antonini are far lower than the averages over the past six, perhaps indicating a more "intimate" Big Show this time around. I've updated my Big Show chart from the last post to include these (unofficial) 2012 numbers:


I think the most noticeable number there is the 69 pieces, far fewer than any of the previous five Big Shows. I am already eager to see if the selected works are generally larger, or if there will be more space between the individual pieces in the gallery, which wouldn't necessarily be a bad thing.

Am I disappointed that I didn't make the cut? Of course! Who wouldn't want their work to be recognized from an enormous pool of local entries. Do I regret entering? Absolutely not. First, I am happy to have made a small donation (via entry fee) to one of my favorite local art spaces. And second, I possibly would have stopped working on my tape pieces after the first one had I decided not to enter the Big Show. The first one began as a visual experiment, but with The Big Show's entry fee good for one to three pieces, I was motivated to make two more. I enjoyed the development of these pieces so much, in fact, that they've spawned multiple related projects now in production. So I certainly owe The Big Show a small creative debt for acting as the "carrot" of motivation in this new work direction. 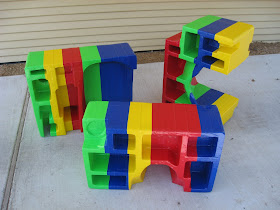 Three pieces that will NOT be part of The Big Show 2012.

While this year's exhibition may be on the small side considering years past, one thing unlikely to be diminished is the exhibition opening and party, to be held a week from Friday on July 13 from 6:30-8:30pm. It's usually THE Summer event in the Houston art scene and will be the first chance for the public to see the show. I know I'm interested in seeing the 7.5% of submitted works that actually made the cut.

If any Pan readers out there also entered The Big Show this year, please feel free to celebrate your selection or commiserate on our rejections in the comments below.