In Linda Nochlin's classic essay "Why Have There Been No Great Women Artists?",

she also asked "Why have their been no great artists from the aristocracy?" Obviously the relationship of the aristocracy to art is strong--the aristocracy were the primary patrons of art for a good portion of human history (and in some circles remain so today), but for a variety of reasons, they haven't been the makers of art. And why not? They would be blessed with the time and wealth necessary to support such a career if they chose to pursue it. But she concludes that there are certain social situations--economic, familial, in terms of academic support--that mitigated against this, just as they mitigated against women art practitioners. She points out that there is no inherent reason why an aristocrat can't be a great artist any more than there is that a woman can't be--to claim otherwise would be to say that the spark of genius never occurs in aristocrats or women.

William Copley was an aristocrat in the American sense. He and his brother were adopted by the Copley family and raised to be heirs to this utilities/newspaper fortune. His adoptive father had made a fortune in utilities in Illinois (and served as a U.S. Congressman). Ira Copley and his wife Edith had tried unsuccessfully to have children; three died in infancy before 1910. So they adopted James Copley then William Copley shortly thereafter. The family moved to San Diego when William was about 10 years old where Ira Copley bought San Diego's two leading newspapers, the Tribune and the Union, and merged them into one powerhouse. For readers under 40, it may be hard to imagine just how important newspapers were in the 20th century. I think they were the most important mass medium of the century, more important than film or television or radio. They had real power, and their owners were among the most powerful people in the U.S.A.

Copley was at Yale when Pearl Harbor was attacked by the Japanese. He was drafted early and served in North Africa and Italy. Ira Copley died shortly after the war and left his two sons equal shares of the Copley Newspaper business. The idea was that both men would run the newspapers, but they had a falling out over politics. William was left-wing while James (like his father) was a staunch Republican. William sued James in the mid-50s to force him to buy him out of his partnership. (James's papers would subsequently be a major force in California Republican politics, and James Copley was one of Richard Nixon's major backers.)

Copley had gotten interested in Surrealism in the late 40s and met Man Ray, who was living in Los Angeles, in 1947. Copley eventually met all the major surrealist artists and built up an extensive personal collection of their work. In this regard, he was fulfilling his socially accepted role as an aristocrat, being a patron of the arts. But in 1947, he started painting. He got encouragement from his surrealist friends. 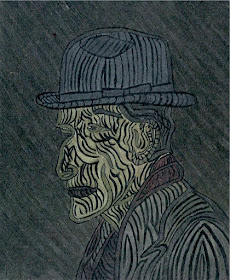 Copley's 1951 portrait of Marcel Duchamp is highly atypical of his work. Most of his figures have a minimal amount of detail and the faces are often completely blank. Copley's focus on Duchamp's wrinkly face marks this to my mind as a highly personal work. Perhaps Copley wanted to get it right as a tribute to an important mentor. According to Copley, Duchamp encouraged his painting. Copley called Duchamp, "My best friend." On painting, Copley wrote of Duchamp,


He taught me all I needed to know about painting; that painting was a thing to do. ... When I finally had an opportunity to show him what I did, he told me only that I should continue. That was enough to dedicate me to work.

From their meeting in the late 40s until Duchamp's death in 1968, Copley financed many of Duchamp's activities--a monograph and a catalogue raissoné, a new edition of the Box in a Valise, a reconstruction of The Large Glass (by English artist Richard Hamilton), and Copley bought Étant donnés: 1° la chute d'eau, 2° le gaz d'éclairage . . .  (which Duchamp showed to him in 1966) for $60,000 ($438,000 in 2016 dollars) on the condition that he give it to the Philadelphia Museum of Art. Duchamp had been working on it in secret since the 1940s.  That work demonstrates a connection between the overt eroticism of much of Copley oeuvre and Duchamp's own eroticism. In fact, Duchamp composed a dirty poem about his friend:

(Written in 1963). Nude women and prostitutes were eternal subjects for Copley. He liked to paint them naked or in sexy lingerie. He was married 6 times. A work he returned to on two different occasions in his life was a monument to the "unknown whore." (Which he painted first in 1965 and returned to in the mid-80s.) 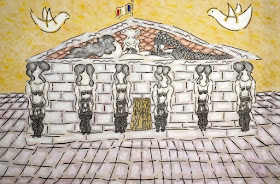 A review by Richard Flood of a solo show at Phyllis Kind Gallery in Artforum astutely observed, "It's not hard to understand Copley's neglect at the hand of American curators--the work is simply too naughty, a quality not sought after by public trusts . . . Naughty art in America has always been a private affair, something best appreciated over brandy in air redolent of cigar smoke." New Museum founder Marcia Tucker was one of Copley's greatest champions (Copley was included in her important group show, "Bad" Painting, in 1978--a show that signaled the return of figurative painting as a respectable activity). In 1986, she put on an exhibit by Copley called "The Tomb of the Unknown Whore." More of an installation than an exhibit of pictures, visitors were encouraged to leave graffiti (in chalk) on the walls. Perhaps Richard Flood would not have been surprised by some of the comments in the guestbook: "misogyny disguised as art" and "garbage," among others. 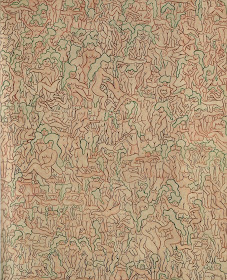 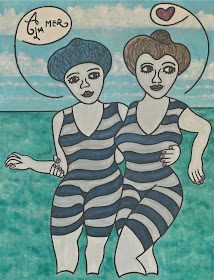 Why is "cartoon figuration" important, lingering as it does just below art historical notice? I have a theory: it has to do with the ubiquity of comics. Not comic books--they were ubiquitous in the 1940s but fell off dramatically in the 50s and 60s--but comic strips. Above I spoke of the popularity of newspapers in the 20th century. They were a mass medium that reached just about everyone, and one of the most important, popular features of newspapers were comic strips. During Copley's boyhood in the 1920s and 30s, he surely saw comics like Popeye, the Gumps and other comic strips that featured simplified humorous figures. If there is a cartoonist I would reference in relation to Copley, it would be James Thurber. Thurber contributed cartoons to the New Yorker from 1930 through the 50s. 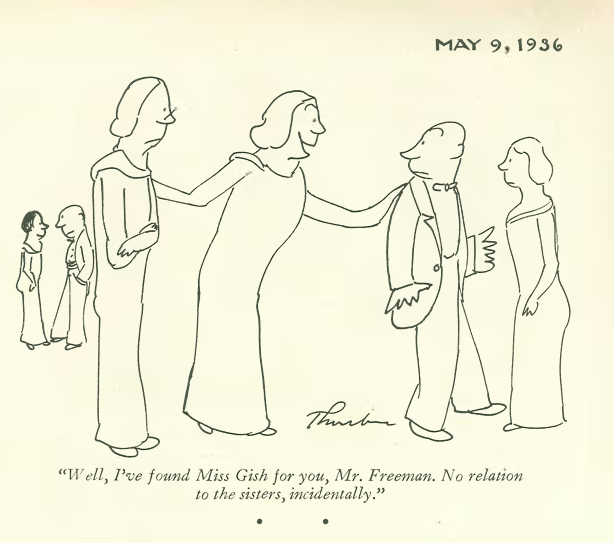 When I see Copley's somewhat shapeless figures, I see Thurber at the same time. However, this may be a case of "each writer creates his precursors", as Borges wrote in his essay "Kafka and His Precursors." As far as I know, Thurber had no influence whatsoever on Copley. And as we can see in On the Beach (above), Copley uses formal devices derived from comics that Thurber avoided (word balloons, for example). 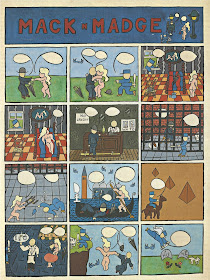 Mack n Madge is a remarkable example of cartoon figuration. It is designed like a typical Sunday comics page from the 1930s, where the story takes up an entire page. The word balloons curiously are blank--they serve the purpose of representing the idea that dialogue is happening as we would expect on a comic strip. There is a kind of love triangle--Madge (the always-nude blonde) and Mack are hounded and stalked by the policeman. The figure of Mack, an everyman wearing a suit and bowler hat, shows up over and over in Copley's paintings. He kind of represents an eternal John. The pair are hounded into suicide by the cop (who seems to haunt their graves after death). Perhaps Copley was thinking of Krazy Kat, which had a similar triangle. But in Krazy Kat, Ignatz hates Krazy (and is continually hitting her in the head with a brick) while Mack loves Madge. The flat, simplified colors also suggest a relationship to Sunday comic strips. 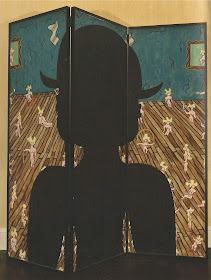 This hinged screen, Harem, is the first work you see at the Menil when you walk into the exhibit. Again we have the anonymous bowler hatted man, who may remind one of the similar figure from so many Magritte paintings.  And a room full of naked blonde women engaging in exercise. If this kind of thing offends you, you probably should stay far away from this exhibit. It's works like this that inspired the title of this post. I don't know if Copley was really a whoremonger, but brothels, streetwalkers, prostitutes and sexually available women are some of his favorite subjects for painting.

for the exhibit is excellent (if quite expensive). Copley was never one for grand art theories, and the essays here are blessedly free of theorizing. Toby Kamps writes a brief biographical essay, Jonathan Griffin writes about Copley as a patron of artists, Paul B. Franklin writes about his long relationship with Duchamp, and Gwen L. Allen (author of one of my favorite books on art, Artists' Magazines: An Alternative Space for Art) writes about Copley's quixotic publishing experiment in the 1960s, SMS. SMS were a series of portfolios that included work of artists that interested Copley. For an artist who seemed somewhat impervious to current trends of his time in terms of his own work, SMS was a bit surprising. You wouldn't expect Copley to respond to heavily theorized art like conceptualism or Fluxus. Allen writes,


And yet SMS suggests otherwise: that he was in fact deeply engaged with many of the most advanced artistic practices of the 1960s, including Pop Art, Nouveau Réalisme, Fluxus, Mail Art, Earth Art, and Conceptual Art, as well as avant-garde music, poetry and performance.

SMS by selling relatively inexpensive editions of art was meant to be an alternative to collecting art through galleries. The exhibit has several issues of SMS on display in vitrines. Individual issues of SMS are prized collectibles now.

Copley had a gallery for about a year in the late 40s where he showed art by the surrealists. His standard deal was to guarantee them 10% regardless of how many pieces were sold. Because he sold almost none of the pieces, he ended up with a nice-sized collection of surrealist art. He continued to collect for the rest of life and built up a great collection of surrealist and contemporary art. (He said he thought all artists should collect art, a sentiment I agree with.) Because of financial reversals, he was forced to auction off much of his collection in 1979. Seven of these works ended up purchased by the Menils, including a Magritte and a Jean Tinguely which are on display in the entryway as you walk into the Menil from the North. The Menil also owns a large number of Copleys. Copley and the Menils clearly shared many interests.

After seeing and enjoying this exhibit, I'm still not sure what I think about Copley. Was he an aristocrat who willed himself into becoming a great artist? So much of his work seems risible (and he explicitly loved humor in art), and the clumsiness of his drawing is unappealing to me. But many of the works have memorable visual appeal. Maybe they would be most enjoyable, as Richard Flood suggested, in a room full of cigar smoke and booze.

William N. Copley: The World According to CPLY is on display at the Menil Museum until July 24, 2016.