I went to the Lewis & Maese auction last night. It was a big auction for them--270 lots. I got there just as it was starting. I picked up my catalog and my number (with which I would bid). The place was packed and there was no seating room. My friend David McClain was there. We laughed about some of the pieces--pieces that were claimed to be by Picasso or Renoir or Soutine or Degas. Lewis & Maese is not a major auction house. They handle mostly the sales of estates. But one good reason to go is that art by local Houston artists often shows up for sale there. For instance, there was  huge 155 x 72 inch Earl Staley painting, Noche en Oaxaca. According to the catalog, it belonged to the "Corpus Christi Art Museum." Did they mean the Art Museum of South Texas? Was it being deaccessioned? In any case, the bidding didn't meet the reserve, so it didn't sell. 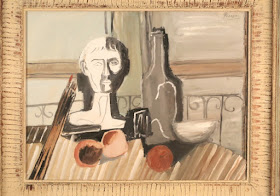 The craziest piece for auction was a painting attributed to Picasso. It's probably best to let Lewis & Maese describe it:


A still life painting with a silver-screen connection. The work from 1931 — a scene depicting a classical bust, wine bottle, fruit, and a window surrounded by a flourish of ironwork is signed Picasso in the upper right. The back bears a faded label from its last exhibition: “‘Bonne Fête’ Monsieur Picasso,” at the UCLA Art Galleries, 1961, on the occasion of the modern master’s 80th birthday. It appears in the exhibition catalog which featured loans from Hollywood notables Kirk Douglas, Vincent Price, and Mrs. Gary Cooper, as well as the Los Angeles Museum of Art, as number 95. The painting, a tempera (gouache) on paper, measures 19 5/8 x 25 ¾ ", and its original owner was Alfred Hitchcock, who lent it to the UCLA exhibition. It came to Houston via the late director’s only child, daughter Pat Hitchcock O’Connell, who gifted it to her best friend, Georgia Waller, and her husband, Gerard Waller. It was bestowed upon them in 1982, after Hitchcock and his wife Alma had both passed on. Mrs. Waller died in 2008, and Mr. Waller is now sending the painting with the Hollywood provenance to auction. (Hitchcock worked with Picasso and Dali and is known for employing artwork throughout his films to great effect; he also commissioned Dalí to create a dream sequence for his 1945 film Spellbound.) This artwork has been looked at by Christies and Claude Picasso.

The estimate was $300,000 to $500,000, which is far more than the average thing at Lewis & Maese goes for. In the end it only went for $150,000. My question at the time was why was it being sold by Lewis & Maese? Surely a larger auction house like Bonhams, Phillips, Sothebys or Christies could get a lot more money for it. Houston painter Pat Colville, who was there last night,  came up with a convincing explanation. If one of these auction houses looked at the piece and had any doubts about its provenance, they might have passed on it. Is there any paperwork that says who Hitchcock bought it from, for example? So if they pass, your only other choice it to sell it through a second or third tier auction house like Lewis & Maese. (And I can assure you that Lewis & Maese do not have an art historian on staff, given the dubious attributions encountered in this auction.) What was interesting was that some bidders were willing to roll the dice and bet $150,000 that it might be real. If the buyers can prove its authenticity, they can make a big profit. 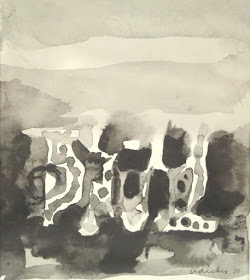 The watercolor Japan by David Adickes was an interesting piece. There was an actual bidding war for it, and on one side of the bidding war was Adickes himself! He often sells pieces in these auctions, but here he was trying to buy his own work. He won the piece. I was perplexed by this and asked on Facebook why he would be doing this. Some of the answers seemed plausible, but the one that made the most sense to me was from Margaret Bott, who wrote, "He bought it for his museum in Huntsville, I would think." And I can see why--it's a great piece. I think a lot of his work, especially his early paintings, tends to be very corny. But Japan is lovely. 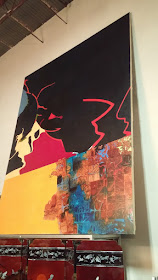 The star of the night was an enormous Dorothy Hood painting, Comet Tangled in the Sun. I liked the colors, but I didn't like the paint handling. There weren't the watery areas of color which give so many of her canvases a cosmic sense of depth, nor did the edges between colors have that Clyfford Still-like serration that gives her best work a sense of danger. Without prompting from me, Pat Colville criticized Comet Tangles in the Sun as not one of Hood's best. I was happy that we agreed! The estimate was for it to sell between $22,000 and $26,000. The bidding was vigorous and the hammer price was $40,000. The room burst into applause.

I suspect the big exhibit opening soon at the Museum of South Texas, the new monograph, The Color of Being/El Color del Ser: Dorothy Hood

by Susie Kalil and the great article in Texas Monthly have put Hood in people's minds. There is certainly a feeling that she has been an unjustly neglected (and perhaps undervalued) artist. 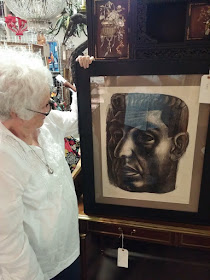 One of the cool things that came up for auction was a lithograph by David Alfaro Siqueiros, the great Mexican muralist. It was a portrait of Mexican educational reformer Moisés Sáenz. It was purchased by Pat Colville, who knew what she was getting into. She asked me if I knew a conservator in town who might be able to clean up some of the foxing on the piece. I didn't even know what "foxing" was (it's discoloration that sometimes occurs on old paper). The image gives Sáenz a stoic, stone-like presence. And it wasn't all that expensive--I think Colville got her money's worth. I like the idea of it going into the hands of an artist, who is someone who will truly appreciate it. 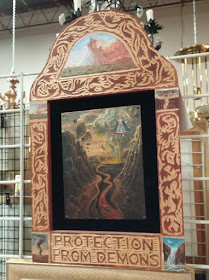 I only bid on one item, a strange painting by Malinda Beeman called Protection from Demons. The auction catalog did not list a date for it. It had a retablo-like feeling to it. I had heard Beeman's name before, but knew nothing about her. I showed it to Colville and she said that Beeman had lived in Houston and had produced eccentric art (which this piece certainly confirms). She lives in Marfa now and runs an artisanal goat cheese business. You can see a short documentary about her farm here.

I had a maximum bid in mind based on some money I'm getting from some freelance writing. The bidding started and quickly reached my limit. It finally sold for just a hundred dollars more than my limit, so I kind of regret that. But I feel good about having a budget and sticking to it. I hope whoever got Protection from Demons likes it as much as I did.

At that point, there were 70 more lots to go and I had been there for several hours. The room had thinned out considerably from the beginning of the night. I was bored by all the furniture and jewelry for sale, so I left. Even though I left empty-handed, I was happy with the results. It's nice to see artists like Dorothy Hood get the prices she deserved in life, and I was happy to be introduced to the art of Malinda Beeman. (If you have a Dorothy Hood gathering dust in your closet, Lewis & Maese proved last night that they can get a lot of money for it.) It was nice to chat with Pat Colville, an artist whose work I love and whose opinions were valuable (at least insofar as they confirmed my own prejudices).
Robert Boyd at 9:38 AM No comments:
Share

I have been writing a lot lately, but mostly for other publications. Here are some links for the writing I have been doing. 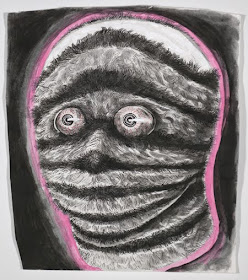 I visited Houston artist Trenton Doyle Hancock at his studio and came away with this article which was published in Art Ltd. 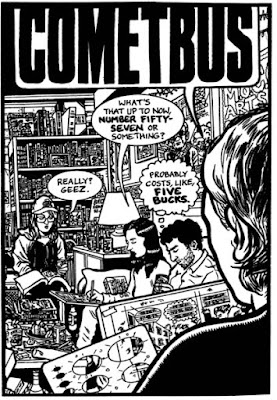 Cometbus 57 is the latest issue of the venerable zine (first published in 1981). This issue is dedicated to New York area cartoonists and members of the comics world. I wrote about it for The Comics Journal. 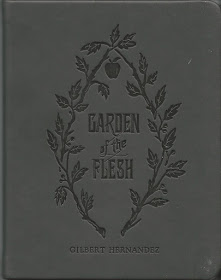 by Gilbert Hernandez is a hardcore pornographic version of the first nine chapters of the Bible. I published this review in The Comics Journal. Warning--it's definitely not safe for work!
Robert Boyd at 11:32 AM No comments:
Share

Been a while since I wrote some art reviews. Here is a short one.

Cary Reeder
Limes, Twigs, and Digits
at Optical Project
On view through September 4, 2016 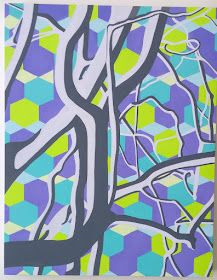 Cary Reeder is known to me as a painter of houses, particularly of the disappearing Queen Anne houses and Craftsman-style bungalows of the Heights. These paintings usually feature pastel colors and hard shadows. Her new work retains the basic color scheme but is somewhat more abstract and stylized. For instance, Entangled features tree branches with high-contrast shadows (which look similar to what we've seen before from Reeder), but behind the branches is a regular pattern of hexagons and diamonds in lavender, teal, lime green, pale yellow and light blue. 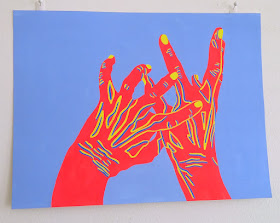 Most interesting to me were a group of gouaches on paper of pairs of hands. The hands are all depicted as flat areas of color with brightly contrasting linework depicting wrinkles and blood vessels. The fingernails are all painted as flat, light pastel colors. (Because Optical Project is barely climate controlled, the humidity in the gallery has caused the paper for these gouaches to curl slightly.)

I'm told that she spent several week in a friend's cabin up in New Mexico working on these. I was quite pleased to see something different from Reeder. The new work makes me realize that what I've always liked most about her work were the flat areas of color. He colors are really quite wonderful.

The show will be on view tomorrow afternoon at Optical Project--that's your last chance to see it.
Robert Boyd at 4:38 PM No comments:
Share
‹
›
Home
View web version