I went to SXSW for the first time this past weekend. I'm not someone who really sees a lot of live music--I'm just too old to stay up late anymore. But my sister who lives in Austin suggested I come up and check it out. I'm not in any way related to the industries that SXSW caters to--music and tech--so all the trade show aspect of it was not available to me. But what SXSW does that's nice is that there are shows open to the public all over town, and that's what took up my time. For instance, a funky art gallery on South Congress, Yard Dog, had a series of bands playing all day long in the alley behind their store. I saw Jon Langford there (they carry his art, too).

In that regard, I have to say I loved SXSW. Sure there are probably a lot of douchey tech-bros there, and a lot of impossibly young musicians (about whom John Nova Lomax commented on Facebook, "Seems fitting that Chuck Berry died during the apex of SXSW. How many bands there know even a single one of his licks now?"); traffic sucked (it was a good day to take the bus), and this satirical website seemed to sum up the feelings of many Austinians (headline: "Woman Who Just Moved to Austin Excited to Complain About SXSW for First Time"), but I had a ball.

One great thing I saw there was Flatstock. This is a show of rock poster art organized like a comic book convention--each producer gets a booth from which to sell their wares. It was set up at the Austin Convention Center and was all about commerce. But it also was effectively a giant exhibit of silk-screen poster art. Flatstock is put on by the American Poster Institute and has been around since 2002.

As I walked through Flatstock, it occurred to me that these posters were some of the only graphic art left to the music business. It used to be that album cover art was really important visually. Artists and photographers could make whole careers designing LP covers. They shrunk down drastically in the CD era and in the era of streamed music, they have no particular visibility. But posters are still produced--possibly more than ever.

Rock and roll posters started out as mainly squared-off lists of the act playing, cheaply printed with minimal design (although these are now valuable collectors items). In the late 60s in San Francisco, illustrators started producing highly designed psychedelic silk-screen posters for rock shows. This died out as the music business got more corporate in the 70s, but in the late 70s and early 80s, people started designing little flyers that could be stapled to telephone poles to advertise punk bands, which were mostly frozen out of the world of professional publicity. These amateur productions got more and more sophisticated, and some of the designers saw demand for their services growing. One, Frank Kozik, taught himself to make silk-screens and revived the San Francisco psychedelic style, with his own ironic punk twist. All the exhibitors at Flatstock are descendants of the San Francisco posters artists and Frank Kozik.

One thing I liked was the variety of techniques--lots of great drawing, of course, but also interesting photography and elegant design. My favorite of the show was a booth called Crosshair, which is run by designer Daniel MacAdam. His posters were images of nondescript industrial buildings with the names of the bands being advertised worked into the design. 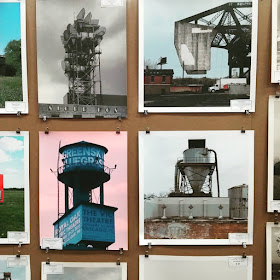 A selection of posters by Daniel MacAdam (Crosshair)

I instantly thought of Bernd and Hilla Becher when I saw these posters and mentioned it to MacAdam, who acknowledged their influence. He told me that he is a big fan. 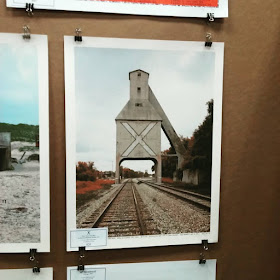 The one poster I bought at Flatstock was the one above--X is one of my favorite bands, and I liked how the "X" in the poster could have been part of the building.

Crosshair shows how far the art of the rock poster has come from Kozik or Victor Moscoso. But generally they still go for intense colors and punk irony. Furthermore, every poster producer does posters for the same bands. For instance, there were a lot of posters for Tame Impala, Father John Misty, the Melvins, and many others. I decided I would take a photo of every Melvins poster I saw--that would be a good way to see the variety of work on display at Flatstock. 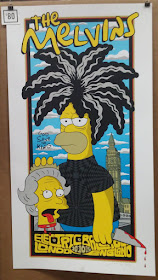 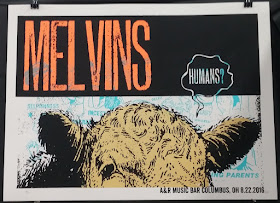 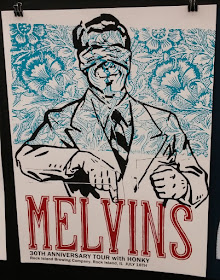 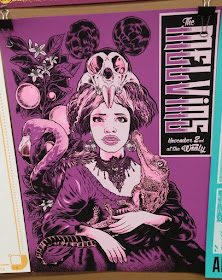 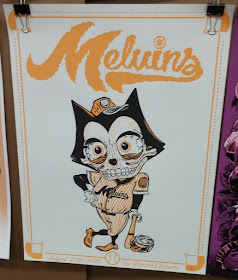 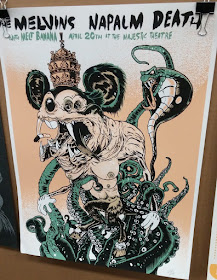 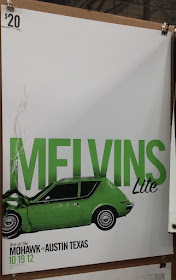 This was an unusually design-y image for a Melvins poster. I enjoy a lot of these posters, but let's be honest--a lot of them are basically updated van art. KLCTVE, on the other hand, seems quite smart. 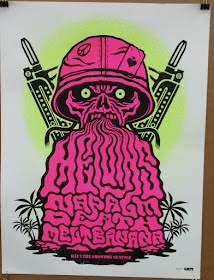 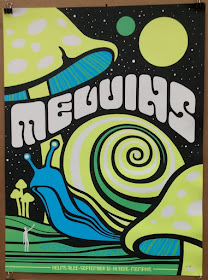 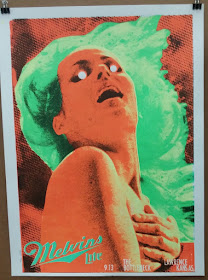 Droid does something that Kozik used to do a lot. He takes photo halftones and printing effects and uses them as design elements. 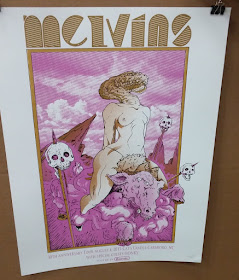 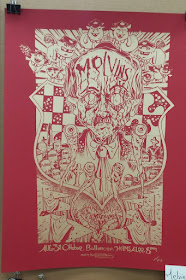 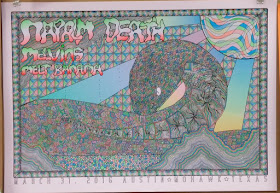 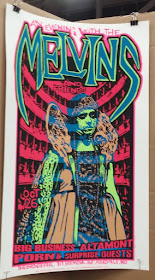 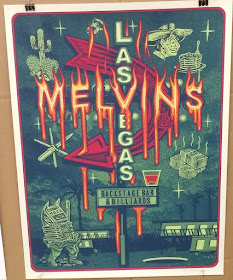 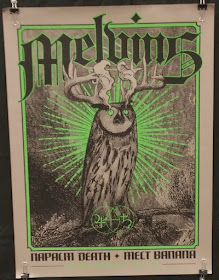 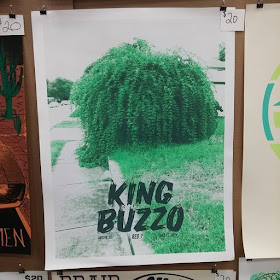 I loved this last one because if you're familiar with the Melvins, you know their front man, King Buzzo, has an enormous fro that looks a lot like the bush in this photo.

I could have picked any number of bands for this trip through Flatstock. But went with the Melvins because I happen to have a connection with both the Melvins and Frank Kozik. In 1995, I was the editor of Roger Corman's Cosmic Comics and one of the comics we published was an updating of the 1979 movie, Rock 'n' Roll High School starring the Ramones, Paul Bartel, Mary Woronov, Clint Howard, P.J. Soles, etc. We wanted a contemporary band and someone suggested the Melvins.

We met the band and conducted interviews with them, which I then supplied to writer Bob Fingerman, who incorporated some of their phrases as catchphrases uttered by the band members in the comic. 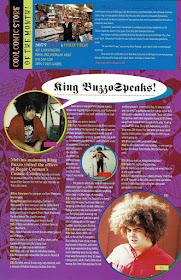 As you can see, King Buzzo's fro was quite majestic. (It's completely gray now.)

The art for Rock & Roll High School was by Shane Oakley, whose great humorous stylized drawing that was perfect for the subject matter. The covers were designed by Frank Kozik, who basically repurposed some of Shane's artwork to create completely new images. That was his technique in doing rock posters--they were all about cleverly appropriated images. 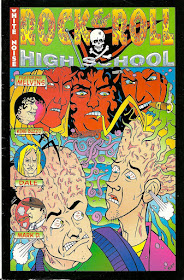 Getting Kozik to do the covers was part of our desperate attempt to be hip. It didn't work--Roger Corman quickly pulled the plug on his comic book line because sales were terrible. But they were fun to do.
Robert Boyd at 5:17 PM No comments:
Share 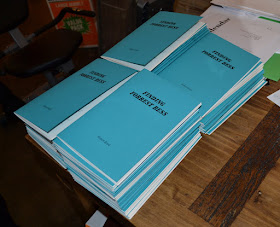 I've always wanted to have hard copies of some of the writing I have done for this blog. So I decided to do it myself.

I chose to update and collect my three pieces about artist Forrest Bess (1911-1977) from 2013 into a pamphlet. I've been thinking about this for a year or so.  Then last year, I curated an exhibit at the Galveston Artist Residency. One of the things we did was to produce a catalog for the show in the form of a zine that contained a long interview with artist Scott Gilbert and a list of the pieces of art in the exhibit. The zine was produced by Dan Schmahl, who designed it and printed it on his risograph printer.

I loved how the True Artist Tales catalog came out. And I also liked Wake, a zine that Schmahl contributed to and printed. And Binder, a zine produced by the Galveston Artist Residency. I recommend both. So I asked Schmahl if he would design and print 100 copies of my pamphlet.

You can see the result above--that is the entire print run. You can order a copy for a mere $6.50 through my online store.
Robert Boyd at 11:20 AM 1 comment:
Share
‹
›
Home
View web version