Last book report for 2020. This time I talk about Kathy Acker in Seattle, edited by Daniel Schulz with contributions from Acker herself, Larry Reid, Kathleen Hanna and several panel transcriptions.

Tonight I did two reports. First was this one on Yard Art and Handmade Places: Extraordinary Expressions of Home

by Jill Nokes with Pat Jasper, with photos by Krista Williams except for some photos by John Fulbright. It deals with gardens and environments in houses all around Texas. I focus my report on her chapters on Charlie Stagg, Cleveland Turner, aka the Flower Man, Vince Hanneman who built Austin's Cathedral of Junk, Rufino Loya Rivas' Casa De Azúcar in El Paso, and Dr. Joe Smith's yard sculptures in Caldwell, Texas.

Annie Koyama is a Canadian woman who was involved in the Toronto art scene. Without knowing all that much about this part of Koyama's life, I have to assume that Toronto, like any other big city, has a vibrant art scene. A little more detail is available in this short oral history of Koyama Press published in Quill & Quire, a trade magazine for the Canadian publishing industry. Apparently Koyama Press was initially financed when Annie Koyama made a very good investment in the stock market, and was motivated by a health scare. I imagine her thinking, life could end at any second, so I better do something I really want with it. (I guess we should all be glad that her secret ambition wasn't to try heroin.)

She decided to bring this project to a close this year. Koyama Press lasted for 13 years, and she shut it down on her own terms (which is rare in the world of small press--they usually end because they are forced to end, as I personally know).

Anyway, there aren't many publishers that I think of as having a personality. I think the publishing industry is too corporate for that these days. But small presses are the exception, particularly if they are still run by their founder. While it is sad that Koyama Press is going away, it has always been down to Annie Koyama. The entire line of books reflects the taste and vision of one person. Raise a glass to the great Annie Koyama. 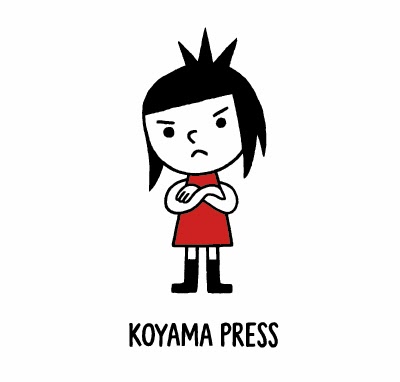 This is the logo for Koyama Press: "Kickass Annie"

I want to list a few of my favorite Koyama Press books. 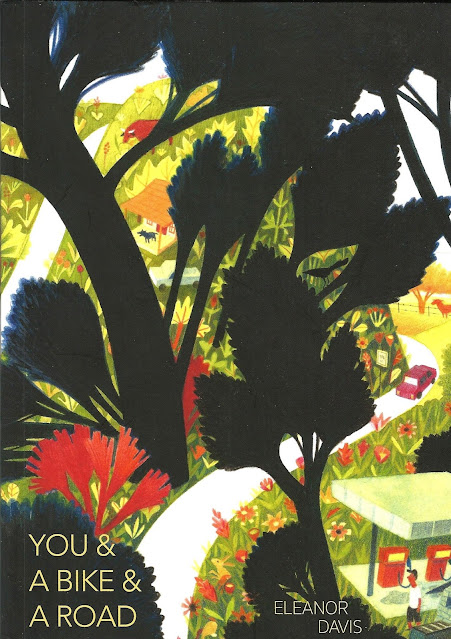 I haven't written extensively about Eleanor Davis. I should have written about this book. You & A Bike & A Road is a diary comic about Davis's epic bike ride from Tuscon, Arizona to Jackson, Mississippi. She intended to go all the way to her home in Athens, Georgia, but she reached her limit earlier than hoped. She drew it as she traveled which gives the book a very immediate feeling. Her father built the bike for her, and this ride had to be the adventure of a lifetime. And her telling of the story is moving--all the people she meets on the way, the things she witnesses--some quite shocking. But one question is why even do this crazy thing? 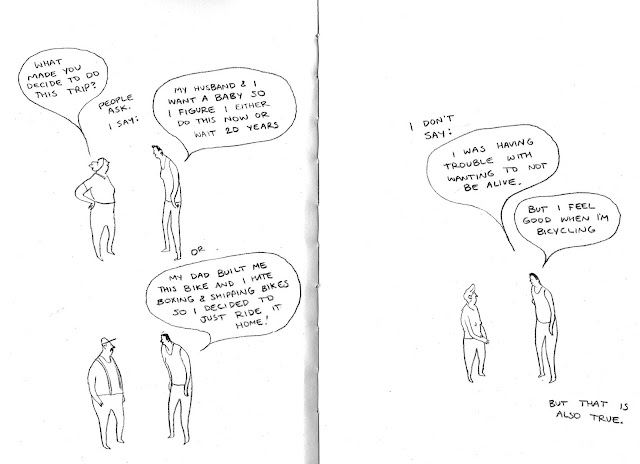 I highly recommend this You & A Bike & A Road.

Another Koyama Press author I esteem is Jesse Jacobs. I reviewed two of his books, By This You Shall Know Him here and Crawl Space for the Comics Journal; both books are excellent. 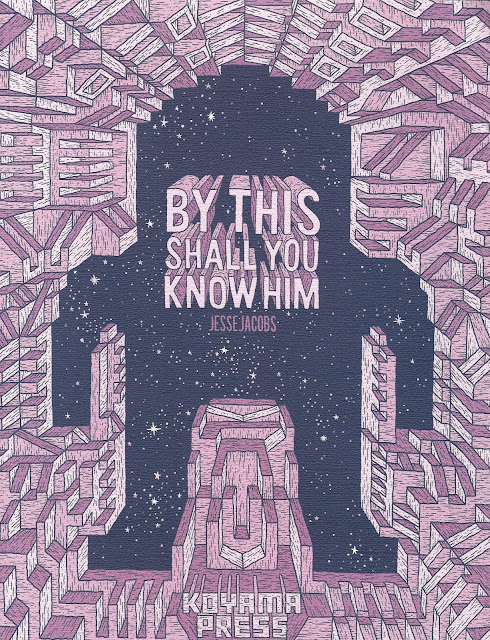 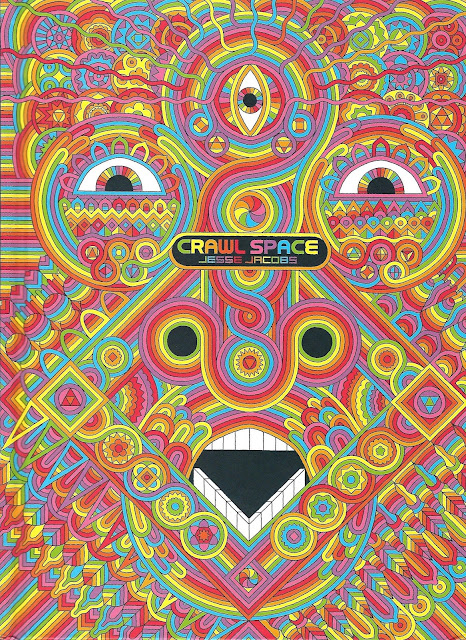 Julia Wertz's The Infinite Wait and Other Stories is simultaneously hilarious and painful. I wrote a brief review of it here, but you should search it out and read it for yourself. 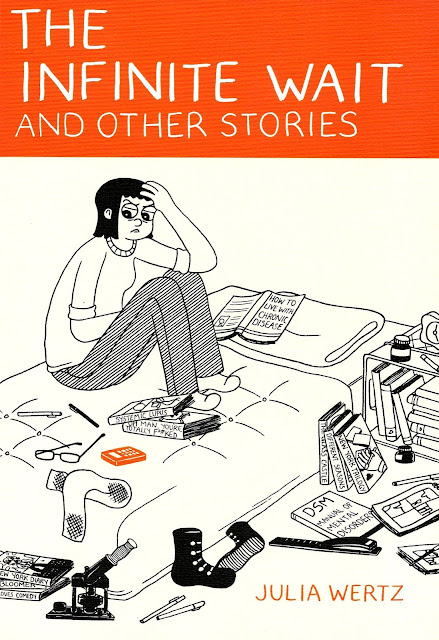 But these are just a small part of Koyama Press's output. Annie Koyama published many other great books, most of which are still available for purchase. You can see them here. I've read about 35 of them, but there are actually quite a few I haven't read. Her standard of quality was high. I know she has been giving artists grants through her personal grant-making venture, Koyama Press Provides. But I believe that is meant to end when the press does. So I wonder what Annie Koyama is going to do next. Something personally satisfying, I suspect.

Today I looked at Mozart, a short biography of the composer by Peter Gay.

Blast From the Past: Richard Stout on Modern Art in Houston

Back in 2012, Richard Stout asked me to help him turn a lecture he had recorded into a video. I did so and uploaded it in several parts onto YouTube. The subject matter is modern art in Houston in the 1950s and 1960s. I was looking at my YouTube channel today and was reminded of them. I originally ran these videos on this blog back in 2012.

I got to know Richard Stout by eating breakfast with him and other artists on Fridays. He was born in Beaumont in 1934 and died this year, in April. Another reason why 2020 sucked so bad. What I get out of these videos is his depth of knowledge and erudition. These qualities were always present when one talked to him.

Today I looked at a novel called Eileen: A Novel

by Ottessa Moshfegh. Eileen was Moshfegh's first novel, and she's published two since. I noted in my book report that the cover is by Thomas Ott.

Today I report on Paul at Home by Michel Rabagliati. I've written about one of Rabagliati's books before.

This week I read the massive Hate boxed set by Peter Bagge. I've written about Peter Bagge's work often on this blog. One of my favorite cartoonists!

Today I talked about Neruda: The Poet's Calling

by Mark Eisner. Spoiler alert: I enjoyed this biography quite a lot.

I haven't done one of these in years. The thing is that after several years of relative quiescence on this blog, COVID has triggered a bunch of new videos, it has made me interested in blogging again. I will never go back to the days of 2012 when I (and my collaborators) produced 330 blog posts. (Not unless someone wants to pay me.) The last real estate art post was done in 2017.

So this morning, as I drank my coffee, I idly was flipping through HAR.com and came across this gem in River Oaks. This house can be yours for 7 million dollars. And it is filled with art. (Which I assume is not included in the purchase price.) A lot of the art is under glass, so it's hard to tell if it is a print or even a poster. I will leave that for you readers to decide. A few pieces I could identify--I leave the rest to you, dear readers. 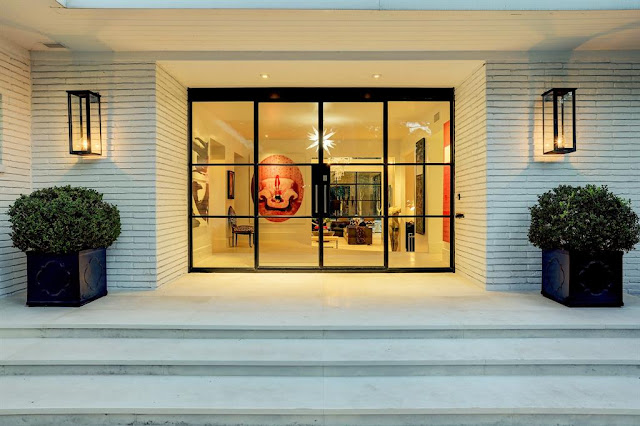 I think this is the front door. You can see art in the front hallway. 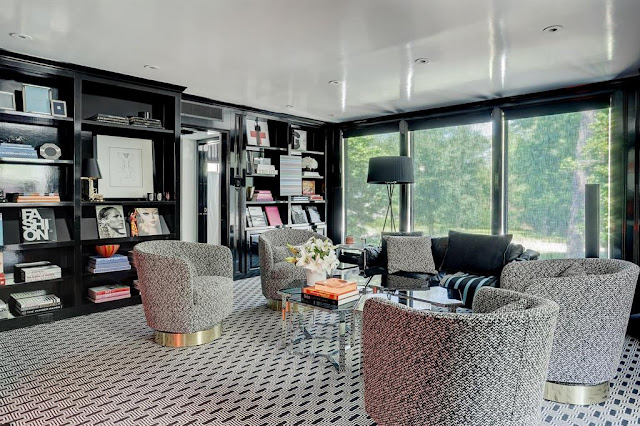 I like how they designed book-shelves to display their art books. Books not for reading, but for displaying. 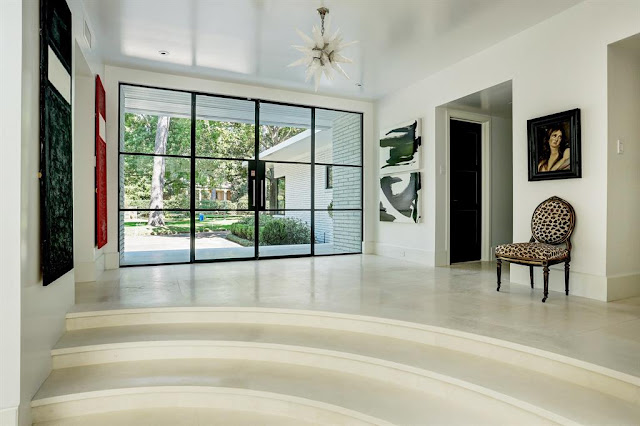 This is the front hall. I have no idea what these artworks are. 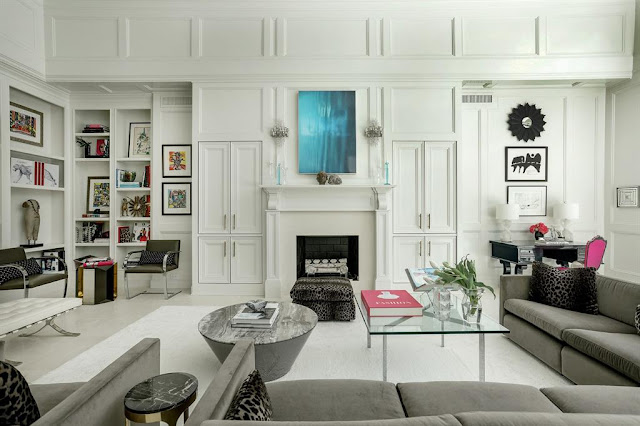 There is something blue hanging over the fireplace, as well as several pieces to the right and several in the book-shelves to the left. 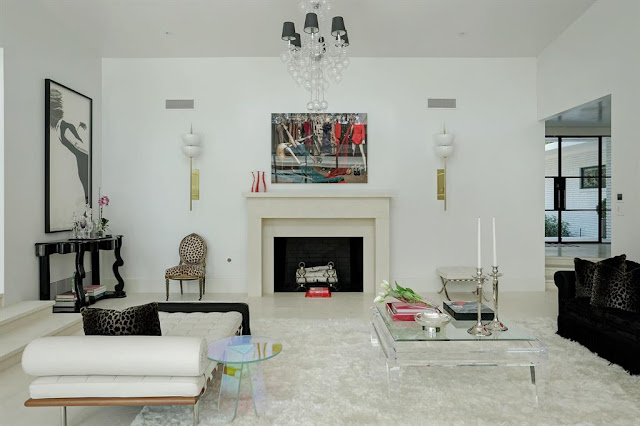 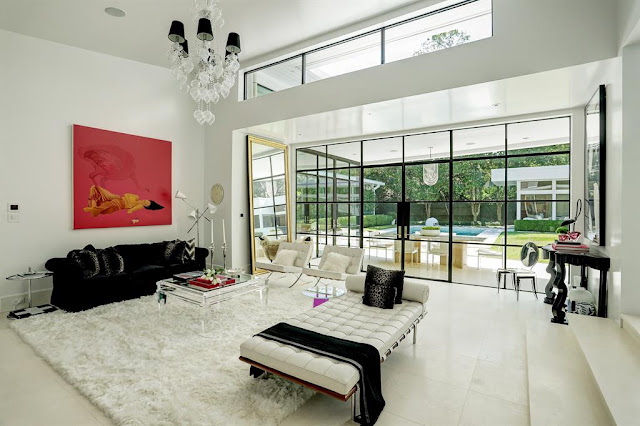 The woman on the pink painting appears to be practicing yoga. 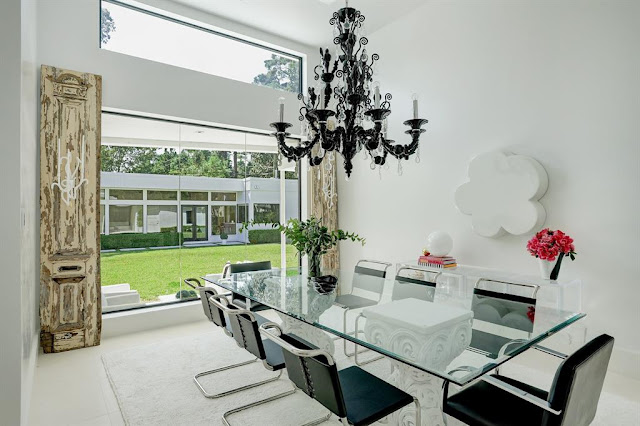 I like how these two door pieces on either side of the window, but I love the three dimensional thought-balloon to the right. 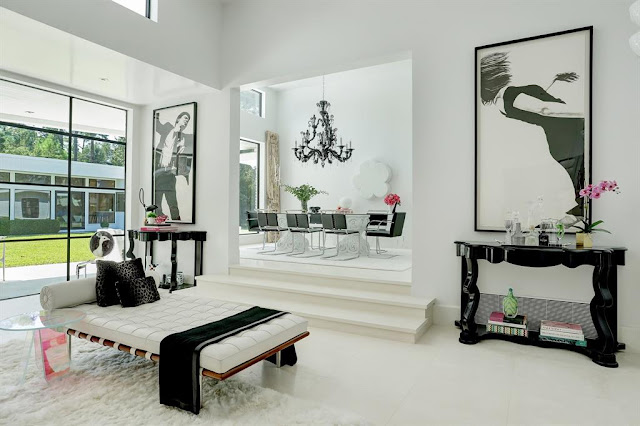 These two pieces appear to be Robert Longo drawings. 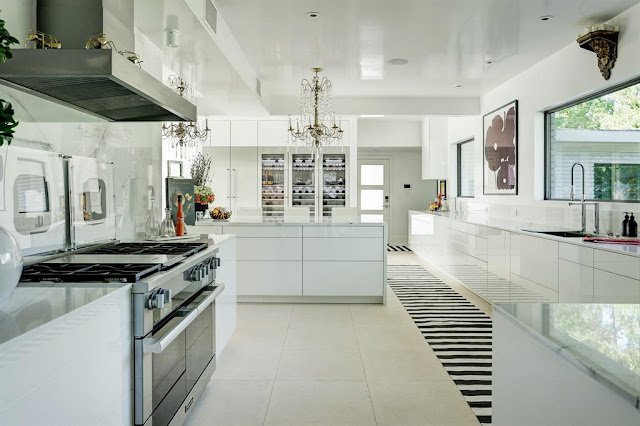 The piece hanging in the breakfast nook appears to be an Andy Warhol flowers print, but I've never seen one this dark. 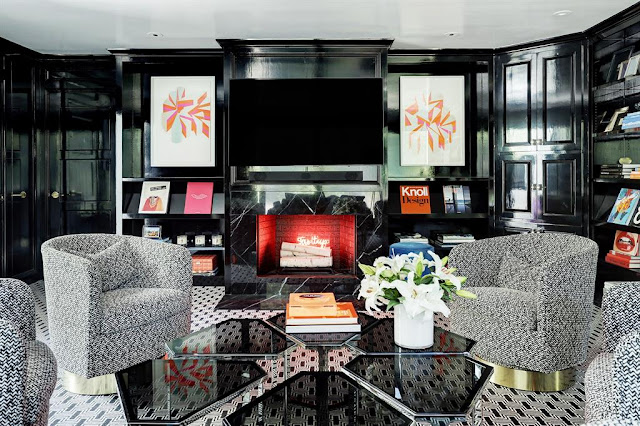 More art books on display, as well as a pair of what appear to be abstract prints. And, if that neon in the fireplace? 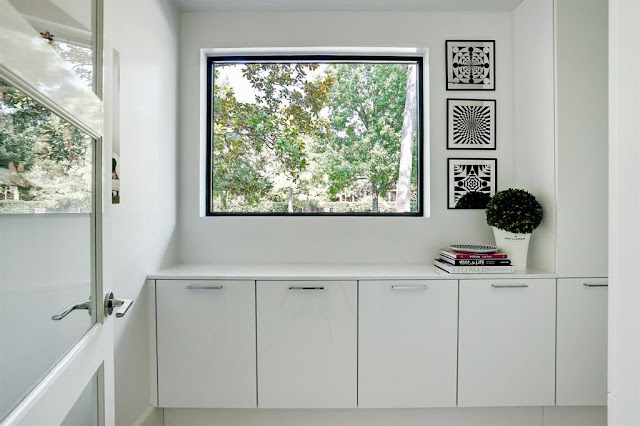 Three handsome black-and-white pieces are perfect for this all-white room. 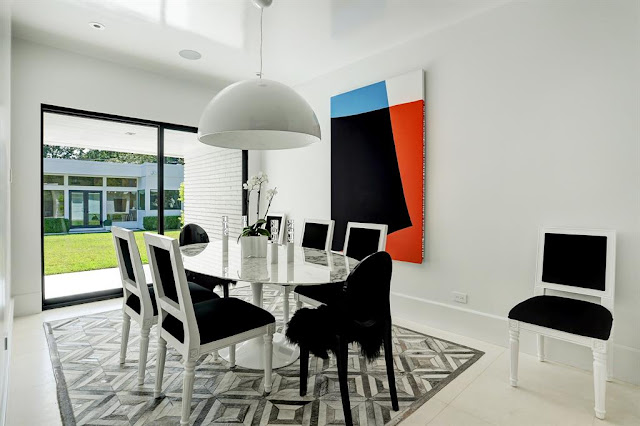 Here's a painting I recognize. It appears to be a painting by Houston artist Paul Kremer. 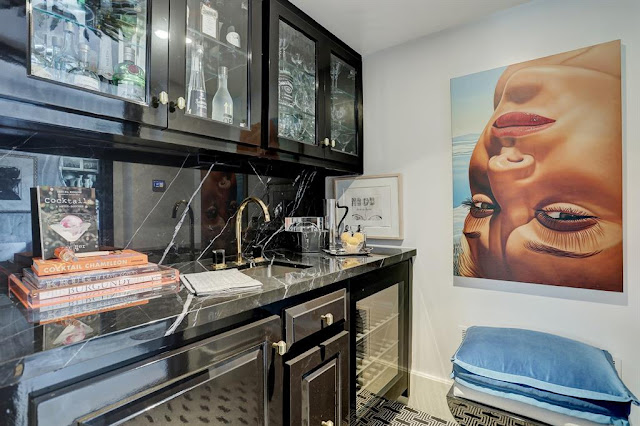 I like that this upside-down portrait is in the bar. If you pass out, it probably looks right-side-up. 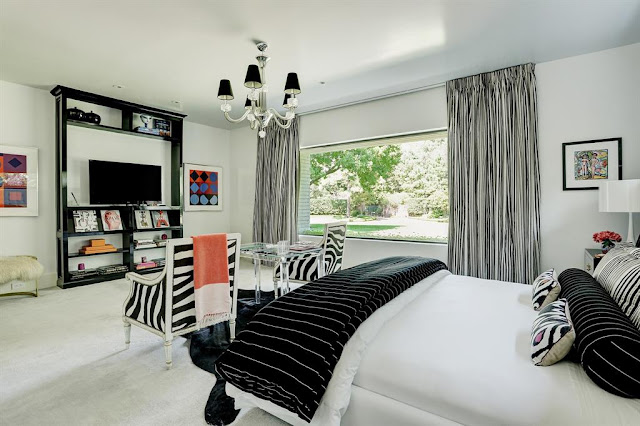 More art books on display. The print on the right of the TV looks familiar, but I can't identify it. 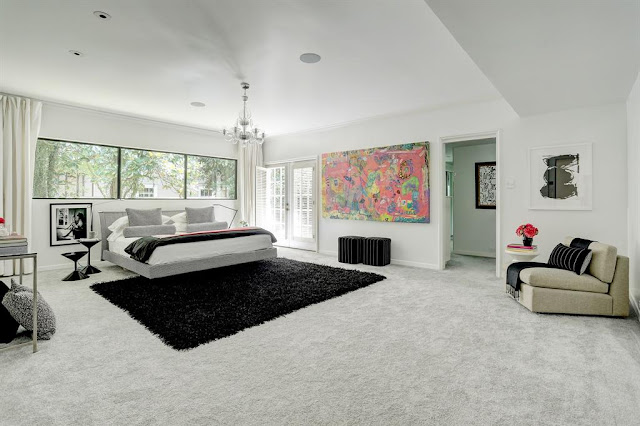 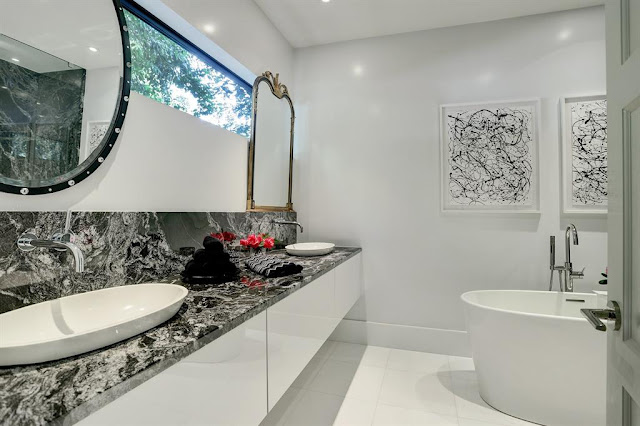 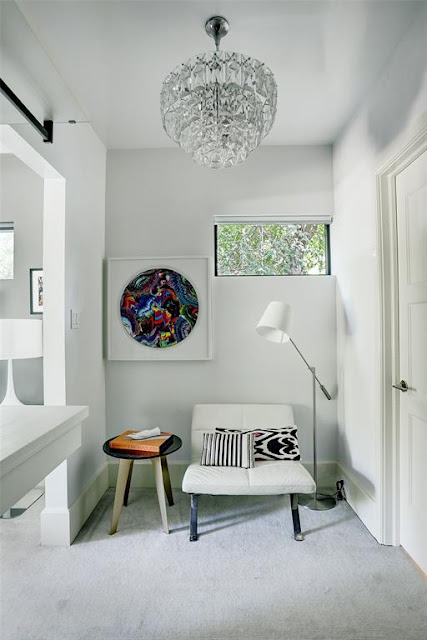 I don't recognize it, but I like the circular piece here. 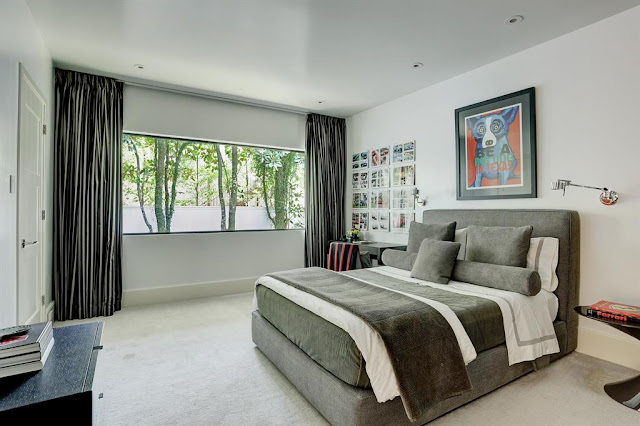 In this bedroom, we have a George Rodrigue piece. It appears to be a poster. The presence of a Rodrigue makes me question their taste a little. 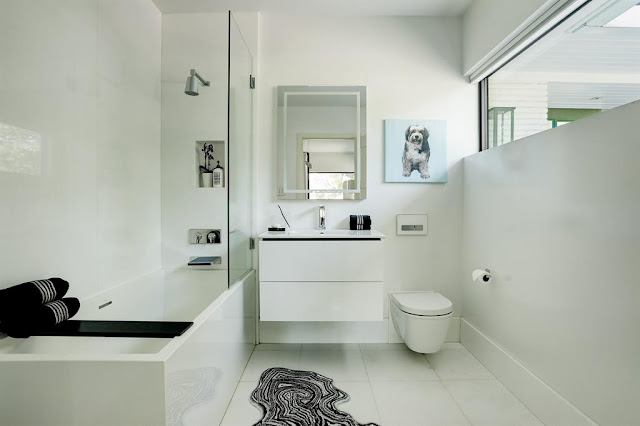 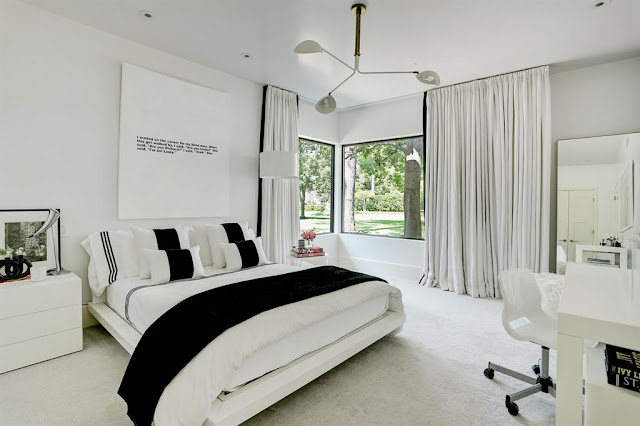 The black-and-white text piece over the bed in this black, white and grey room. It's a challenging piece of art (that I can't identify), but it seems perfectly designed to match the room. 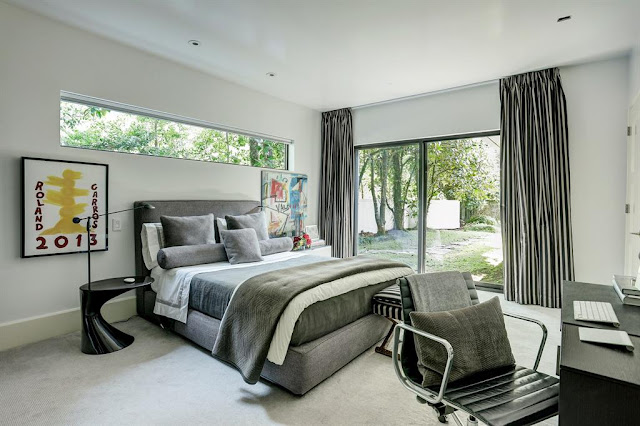 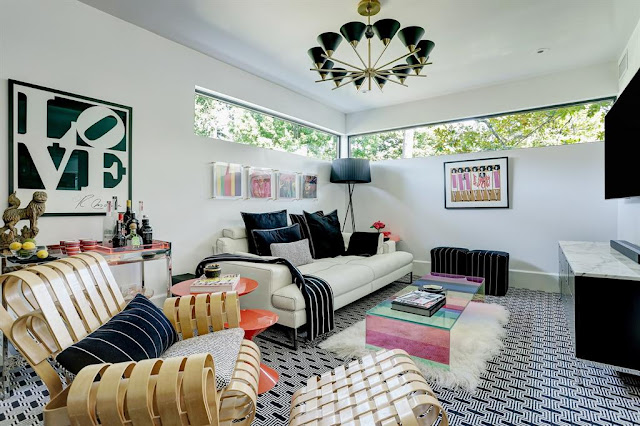 The Robert Indiana print on the left fits in with this jaunty room. 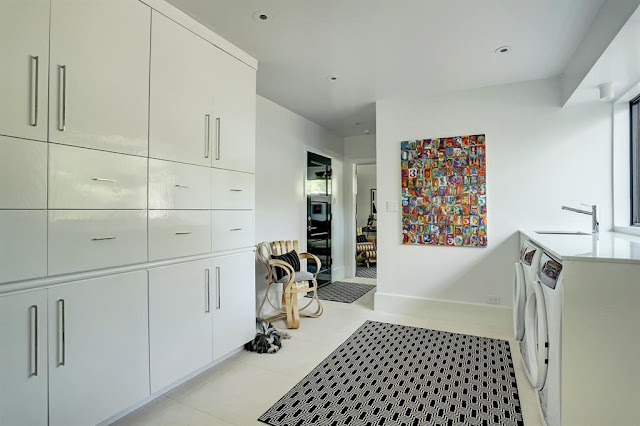 Oh my god! Is this an actual Jasper Johns?
If you can identify any of these, please comment below.
Robert Boyd at 9:06 AM No comments:
Share

Today I looked at Music & Literature no. 4, a journal devoted to deep dives of a relatively small number of writers and musicians/composers. In this case, the people under discussion were:

And I want to leave you with a piece of Barry Guy music that I liked, After the Rain.

I went back and looked for additional photos of Hélène Cixous and found one where she has on her "sphinx" make-up. 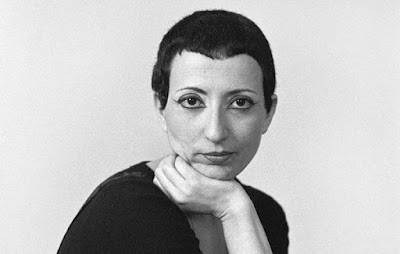