Pieced Together and the Tradition of Graffiti 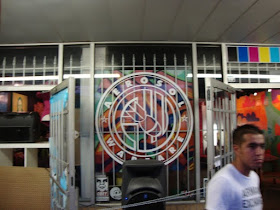 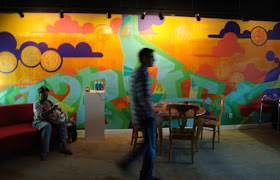 The pieces on display are small, essentially acrylic versions of the type of large-scale wall pieces that typify the artform. 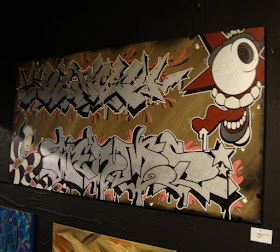 "Icons" by Reks and Worms 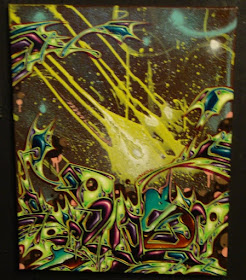 The opening was not just a passive viewing experience for gallery goers. They had a wall of tiny canvases where you could make your own micro-graffiti piece for $5; it was very popular with the kids (and their parents). They set up a computer-controlled projection system that allowed people to create large scale graffiti pieces projected onto the wall of a building across the street. And they had car-hoods on easels with local artists creating pieces on them. 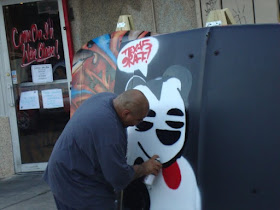 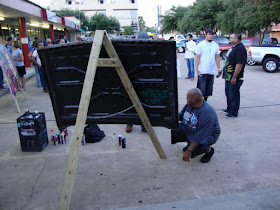 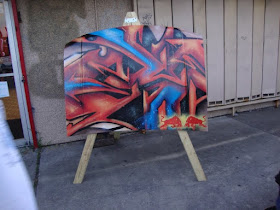 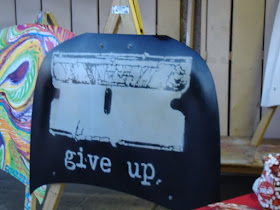 Even notorious local poster artist Give Up did one. I asked if Give Up was present, but the publicity-shy artist apparently stayed away, lest someone snap his photo. (Someone even asked me if I was Give Up.)

There was an amazing display in the store. 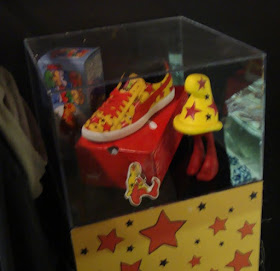 Commemorative Puma sneakers in honor of the late, great Vaughn Bode. This shows that the proprietors of Aerosol Warfare have an awareness of history.

Graffiti art is essentially ephemeral. Illegally put up on walls and concrete barriers, they get rapidly painted over by property owners, city workers, highway departments, transit agencies, etc. This situation would seem inimical to the formation of a tradition. And yet, in pre-literate societies, traditions like this of impermanent artforms (performed music, spoken poetry) have lasted for centuries.

So who was Vaughn Bode and what does he have to do with graffiti? Was he a graffiti artist? Nope. He was a cartoonist whose style informed a lot of the early New York City graffiti artists. 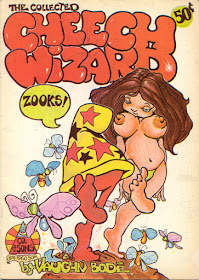 Early writers not only imitated Bode's art style. They included many of his figures in their pieces--Cheech Wizard, the lizards, the "Bode broads", etc.

What were some other non-graffiti sources? I think the psychedelic rock posters of the 60s had their effect. I also think these artists were looking at the artists from Heavy Metal magazine (which started publication in the U.S. in 1977). Specifically artists like Caza and Druillet.

But these artists who were covering subway cars in NYC in the 1970s have no relationship to an artist like "News" from the Rio Grande Valley--except that a tradition has been established and spread across the U.S. and indeed all over the world. 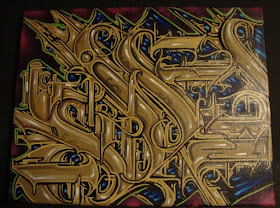 This artform has been given a certain degree of respect from the fine arts world, analogous with its grudging embrace of comics art by the art world. Art critics respect its folkish traditions and seeming authenticity. But graffiti art has some problems as far as being a part of the art world. It's not a perfect fit. There is a basic truth about graffiti--it is a fundamentally adolescent artform. This is not to say its practitioners are teenagers (although many are), but graffiti, like so many adolescent activities, involves the thrill of petty crime. The colors and cartoonish origins also feel adolescent.

I am not trying to insult the art of graffiti. But I do wonder what it would mean to be an old graffiti artist. Maybe it would look something like this piece. 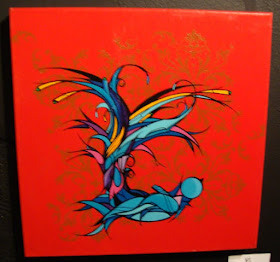