Where Does a Work of Art Get It's Value? 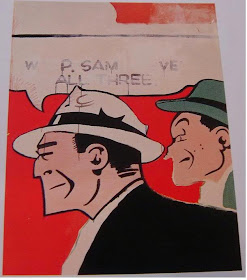 This is one of the earliest pop art pictures Andy Warhol painted. After he saw Roy Lichtenstein's comics-based pieces, he gave up on using comics as a source for his own work.

The actual Chester Gould comic strip that this painting was derived from evidently dates from 1951. You can buy that original for $175,000.

So what does an original Chester Gould Dick Tracy strip usually go for? From this dealer, who sells a lot of comic strip art, your can spend between $495 and $1000 for a Dick Tracy original. That's about what I've seen from other dealers as well.

Now personally, I think Chester Gould is a great American artist, and that his original art should be worth a lot more. And while I think the multi-million dollar prices some Warhol pieces have gotten at auction are pretty ridiculous ($71 million?!), I have no problem with the idea that his art is and should be valuable.

What seems bizarre is that a piece of Chester Gould art should be worth 175 times what it might usually be worth in the market because Andy Warhol happened to have copied from it. Admittedly, it hasn't sold--$175,000 is the asking price. But this seems like a perfect example of Warhol's brand being used to enhance the value of something else. Don Thompson talks about this effect at length in The $12 Million Dollar Stuffed Shark, but usually in terms of individual artworks getting a boost from their association with branded collectors, dealers, auction houses or museums. For example, a painting at auction that came from the collection of David Rockefeller will sell for more than a similar painting by the same artist that came from Joe Shmoe's collection. In this case, a non-Warhol piece of artwork is worth more because Warhol is associated with it.