The current installations at Project Rowhouses go by the name "Round 31: Life Path 5: Action/Restlessness". Uh oh. There are two colons in this title, which I think is a warning that the curator couldn't figure out what she wanted. (To be fair, the description of the installations on the Project Row Houses website only has one colon. But the signs on the houses themselves are as I have written above. Either way, that title is a headscratcher.

As anyone who has checked out Project Row Houses knows, it consists literally of a bunch of refurbished but stripped down shotgun shacks on Holman St. in the Third Ward.

(To be fair, there is a lot more to it than just these houses.)

The houses serve as little galleries in which artists can make installations. I wrote about some of the summer student installations earlier this year. In that show, the work in each house was distinct and had no particular relationship with the work in any of the other houses. This time around, there is a continuity and a single curator, Vicki Meek. Again, each participating artist gets his or her own house in which to build an installation, but Meek has made sure there are common elements. Between each house is a hand painted sign like this:

This one is outside the "Bones House" (more later). Here are some more of the exterior signs. 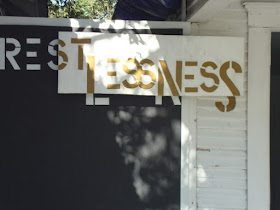 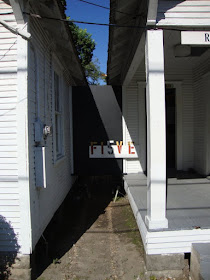 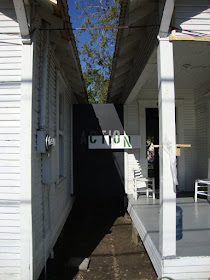 So the title of the show is actually written out in these interstitial signs. OK, that makes sense, it's the curator's touch and it doesn't interfere or intrude on the installations themselves. But then there is one other common aspect that is inside all the houses--and it is slightly unnerving. 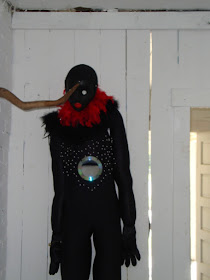 This bizarre harlequin figure is in every installation. This is Jesse Lott's installation, and he has hung masks on the wall. So hung on the wall with the masks is "scary button-eyes" here.

Of all the houses, this is the most traditional "hang some art on the wall" exhibit. 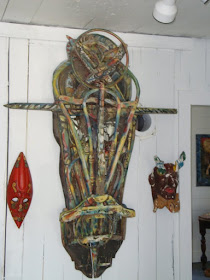 And everyone loves masks, right? They are ubiquitous (especially this time of year) and seem to pop up in every culture. But maybe Lott is making a point about colonial appropriation. Masks were used by indigenous societies as aids in ritual. This concept of collecting them and putting them on display was part of the whole Western imperialist project, right? And when you think of heads mounted on a wall, you think of big game and the great white hunter. Masks are a little like that, except the "game" here is another culture. Is that what Lott is thinking? Or does he just think masks are cool? (I sure do.) 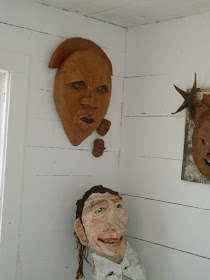 Of course, the limp harlequin hanging on the wall sort of supports the anti-imperialist interpretation, but I assume it was added by Vicki Meeks. Here is a more benign harlequin, in the "Bones" house. 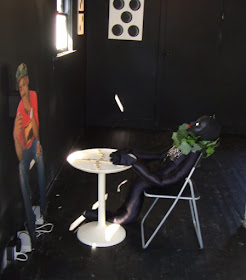 She (he?) is playing dominoes with the cardboard cutout on the left. This house was conceived by Patrick Washington, and this is where some serious nepotism enters the picture, because Washington is Meek's son. Still, this house was really cool--Washington painted the inside black and put white spots on the floor and wall--it was like being inside a giant domino. 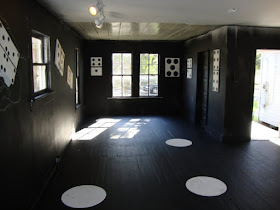 And I liked this wall painting: 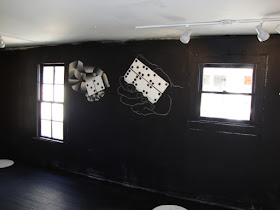 You don't notice the harlequin in Freedom House at first, but then it startles you from behind the door. 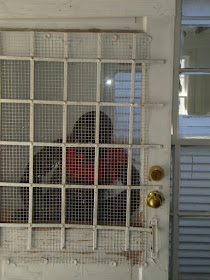 It is behind bars, ironically. Freedom's House was conceived by Freddy McCoo, and features sound recordings of people telling the interviewer what freedom means to them. 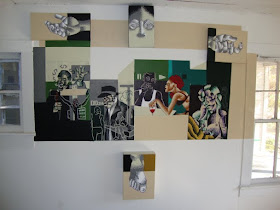 It also featured this wall painting which I liked a lot. But notice that it looks pretty similar in style to the painting in Bones House. There is a lot of collaboration here, so I wonder, who painted these wall pieces?

Here is the harlequin in Imani/Nia House, which is the "religion" themed installation by Vicki Meek. It's generally a respectful, ecumenical piece, but one wonders if the harlequin is being crucified here.

Elia Arce did Light Green Dark Green. This is one of the most frustrating but still one of the coolest looking projects. Here's a description of it: "Elia Arce conceived of this house. It describes how to make something as simple as an environmentally responsible indoor garden become an economic development project for PRH residents. By growing wheat grasses and gourmet letuces, the PRH residents can become a supplier to specialty stores and restaurants in the Houston area. [sic]"

I'm sorry, but this just seems dumb. Look at this indoor garden. 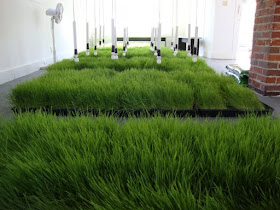 Looks cool, right? Very cool in fact--I liked just being in the same room with it. It was an oxygen high! But people around there live in small houses and apartments. Who among them is going to give up this much space in their home? Especially for something as speculative as selling wheatgrass to yuppie restaurants and supermarkets? How would they even do this? Did Arce identify any potential buyers, or think about how actual distribution would take place (are these urban farmers going to take their wheat grass on the bus)? The whole thing seems like an impractical feel-good liberal scheme. (And I say this as an impractical feel-good liberal dude.)

Still, it looked cool, which is what I look for first in an installation. And where was the harlequin? 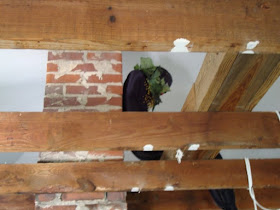