If you are driving around Rice Military looking for the Darke Gallery, the only thing to visually distinguish it from the tall townhouses that populate that neighborhood's small blocks is this sculpture:

When I went in, I met the owner of the gallery, Linda Darke Swaynos. She told me about the show they had up (paintings by Richard Martinez) and in the process described her strategy for selecting artists. Her artists tend to be art professors at various universities around Texas. As she put it, many of them are in areas with few or no art galleries and little opportunity to show their work. And practically every university in the state (and the whole country, too) has some art teachers, and many have art departments and a brace of professors. So for her, this forms a nice pool of talent from which to pick artists to exhibit.

Richard Martinez teaches art at U.T. San Antonio. His canvases are not strikingly original. When one thinks of shaped canvases and stripes, one thinks of Frank Stella works from the early '60s. Martinez' canvases are mostly monochrome (the spaces between the stripes are subtly different shades of the same color as the stripes) but unlike those early Stella pieces, they are brightly colored. The shapes, too, are different--baroque and even rococo, in a way. (This, too, recalls Stella--but the later Stella of the wall sculptures.) 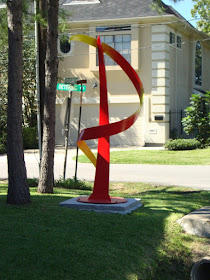 The pieces also all have a single painted element in silhouette. This is another little baroque touch. 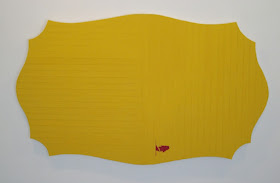 There is not that much to say about these. This isn't quite a situation of "What you see is what you see." But close. 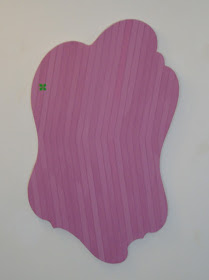 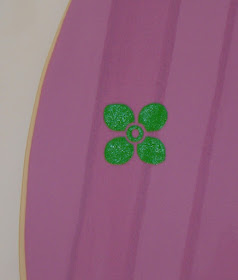 The thing is, I like these paintings. It was pleasant being in a room with them. And that's enough.

Darke showed me another piece from her most recent show that I really liked. 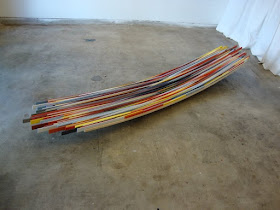 Again, this was a nice piece to share a room with. It was fun to walk around it taking pictures. 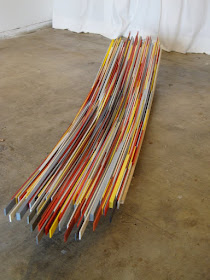 I like the fact that it is a sculpture, and a fairly large one at that, but that it remains so low to the ground. I like that you have to look down to really see it. It also reminds me of canoes I saw in Brazil.
Robert Boyd at 7:24 PM
Share