There is something really weird about McClain Gallery's show "A Room of Her Own." OK, the title. We get it. Virginia Woolf. So a show of women artists. But as far as I can tell, the only curatorial idea present in this show is that all these artists are women. I will willingly acknowledge that the art world still has sexism, but it has obviously improved a lot over the past few decades--especially contemporary art. Look at the artists I've written about this year. Look at the composition of the artists going into the Whitney Biennial. And frankly, look at the artists in this show--Kiki Smith, Louise Nevelson, Jenny Holzer, Cecily Brown, Tracey Emin, etc. They are all hugely successful artists, artists scarcely in need of affirmative action. I could see the grouping if there were some feminist idea animating the work, but there really isn't--at least, not that I can see. (Indeed, Inez van Lamsweerde's enormous photographic print, "Kate in Veil", is notable for two reasons: "Kate" is a total hottie, and she is wearing a veil and nothing else. That's one piece designed to appeal to the fellas! Perfect for hanging in your "man cave.")

So maybe a better way to think of the show is that it is a chance for McClain to put on a group show of blue-chip art. That's how I related to the show. And that's perfectly fine. My favorite piece in the show is this one: 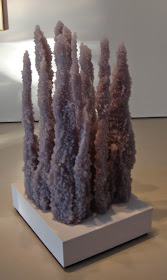 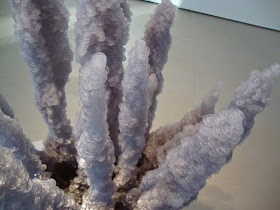 Tara Donovan's sculpture is really cool, and this one was amazing.The buttons are semi-transparent, so the effect (which you can't really see in the photos) is weirdly hazy and out of focus. Because on the edges of the sculpture, it is transparent, but the deeper you go in, the more the layered buttons block light. The effect is remarkable--it's as if these stalagmite-like stuctures are out of focus. It is literally hard to see the edges unless you get really close. It's disconcerting. Making a huge sculpture out of buttons or plastic straws or paper plates seems like kind of a stunt when you hear about it, but the proof is in the pudding. "Bluff" has a truly remarkable presence.

I was astonished and really pleased to see a piece by one of my teachers from Rice, Karin Broker. When she was teaching us, her main thing was doing huge drawings and etchings of flowers. But that was in the mid 80s and this is apparently what she is doing now. 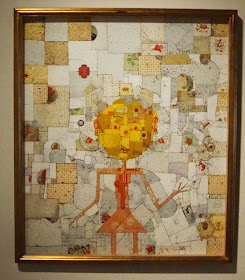 In the back of the gallery is a separate show of small pieces with another Broker piece. (Sorry for the crappy focus.) 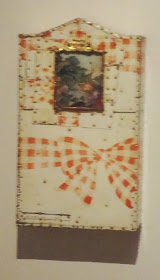 Here's a detail of the Farm Box. 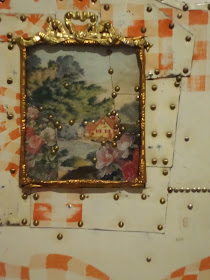 It's hard for me to square these pieces with the Karin Broker art I used to see, but I like them a lot. It is as if she decided to take all her strengths (incredible draftsmanship, beautiful sense of light and dark, hard-won skills as a printmaker) and chuck them all out. And that can be a useful strategy if you want to goose yourself to a new or different place, artistically. I think it works here.

One last piece I want to mention, also in the show of small pices in the back. It's by Rachel Whiteread, whose work I have always loved. But she's famous for taking rooms and indeed whole buildings and making full-size sculptures of the negative space within them, right? So what kind of "small" work can we expect from her? 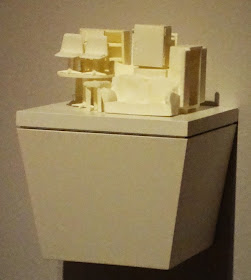 It's basically a miniature version of a fairly typical sculpture (positive instead of negative, though). And the means of producing it sounds really high-tech--I'd love to see one being made. I know these techniques are used by industrial engineers and designers when they are producing models of new machines. (I had a summer job at Cameron and was shown some of these 3-D "printed" objects of reciprocating gas compressors that were on the drawing boards.) What is cool about this tiny sculpture is how much it looks like her enormous concrete versions. (And it's fairly inexpensive, given Whiteread's stature. Almost in my price range...)

"A Room of Her Own" is up through December 31, and the "Small Works and Artists Books" show in the back is up through January 2.
Robert Boyd at 10:02 AM
Share