Here's another report coming in a little late. The Bayou City Art Festival was held March 25th through the 27th in Memorial Park. Parking at Memorial Park was fairly limited, so they had shuttle busses coming in from downtown and Northwest Mall (where I originated). I wasn't sure what to expect. Was this going to be craft-oriented? Was it going to be lots and lots of kitsch? Who would be attending? I didn't really get solid answers to these questions, but I can give you my impressions. 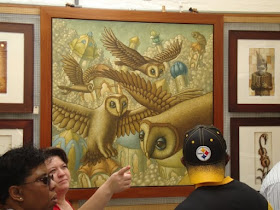 This Jay Long painting was a typical (but very fine) example of a lot of what I saw there. (I photographed it because it was good and because I like barn owls.) Long is a painter from Austin. There were lots of painters, printmakers and collagists--two dimensional work was common. The Festival definitely wasn't a craft show, but at the same time it wasn't the kind of art one would typically see at a contemporary art gallery in Houston (although some artists worked in modernist or postmodernist idioms). And that presented a question--why isn't Jay Long's work (or work like it) in galleries in Houston? Occasionally you see work in this vein at places like Koelsch Gallery and in a few other places. Still, it feels a little out of place. And likewise, you can't imagine more conceptual artists like Dump Truck or Francis Giampietro setting up booths in the festival circuit (and there is indeed a circuit). 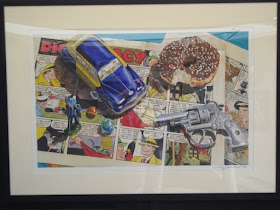 I liked this one because of the way he incorporated an actual Dick Tracy strip into it. Larry Stephenson is an artist from Kansas who loves old toys. They are the primary subject for his masterful watercolors. If it's a toy based on a comic strip, he'll sometimes include the comic in the picture. I like the contrast between flat image and representation of a three-dimensional object within the same image.

There were plenty of sculptural objects for sale. Some, like this one, tended more towards the "craft" side of the equation. 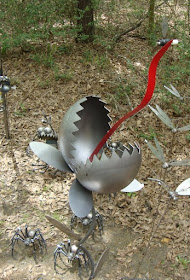 Fred Conlon's work doesn't really pretend to be anything other than funny clever garden decorations. They were definitely popular with folks, and if I had been looking for a garden decoration, I might have gotten one too. 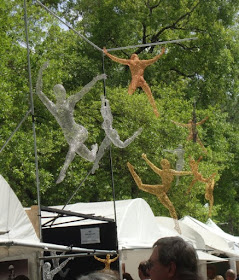 On the other hand, I'm pretty sure I'd never want to own one of these flying metal dancers by Michael Gard. However, I did like them there in the park, hanging over his booth. With all the previous artists, I could see the point of coming to the Festival. Long, Stephenson and Conlon all had items that someone could plunk down a relatively small amount of money and buy on the spot. (In Long and Stephenson's case, they had original paintings--pretty expensive--and much cheaper prints.) But a large sculpture like this--it seemed like a leap (no pun intended). I assume Gard knew what he was doing--that someone in this large crowd would buy over the course of three days. Who buys a large sculpture at an outdoor art festival? 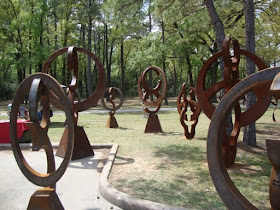 What I said about Gard goes double for Eric Ober. As handsome as they are, these mechano-totemic objects, there is no way someone just walked up that weekend and bought one. A purchase of something that big has to be a major decision. However, Ober is from Houston, so maybe this was just a chance to show off. He is represented by commercial galleries, but none in Houston (according to his website).

One thing that was really cool about the festival, yet really kind of at odds with the rest of the festival, was the Emerging Artists Program. These were 13 high school students who made installations. And some of them were pretty far out--way beyond what I would have imagined doing myself as a high school artist. The works included pieces made with modest, "unartistic" materials; many depended heavily on their context to be identified as art; some were process based. I suspect there are some pretty hip art teachers out there. Specifically, I bet there is one very hip art teacher at Pearland High School, which sent an astonishing four pieces. (I mentioned in an earlier post that the removal of the David Addickes Presidential Heads did not mean that Pearland was now an art-free zone--because it seems that Pearland High School is, in fact, a hotbed of art) The High School for the Performing and Visual Arts sent three pieces, but that's to be expected surely. 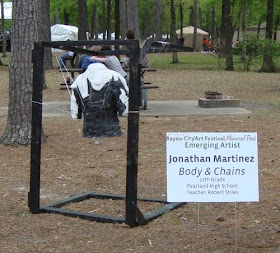 Here's one of the Pearland artists. This one reminded me of the installation by Jonatan Lopez at project Row Houses last year. 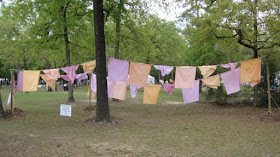 Ava Barrett, The Way It Was, sheets and clothesline

This was the first of the emerging artists pieces I saw, and I initially had a "what the fuck?" reaction. I wasn't expecting to see any art like this here. This piece depends almost entirely on context to signal to a viewer that it is a piece of art (just like Marchel Duchamp's Fountain or Andy Warhol's Brillo Box--see Arthur Danto for more) That said, those warm pastel rectangles fluttering in the wind were beautiful. 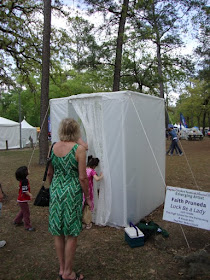 Another HSPVA student went for process art, building this little pavilion and filling it with zillions of ladybugs. Seriously, who can imagine a high school student coming up with this? It's like finding out that a high school student composed a 12-tone concerto. I'm amazed. The artist was there, watching people enter her piece. I spoke very briefly to her and asked where she got the bugs. She got them through the mail. You can mail order ladybugs. Who knew?

Here's the inside of Luck Be a Lady. 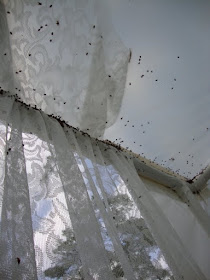 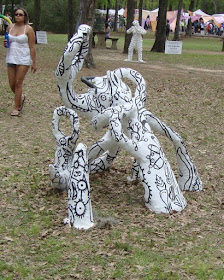 Marshall Mosley, Nature's True Form, i don't know what this is made of

Mosley is another Pearland artist. I think, based on the small sampling here, we can say the Pearland school favors sculpture in a more traditional sense, while the HSPVA school favors site-specific installations and conceptualism. Fortunately, they did not form up into gangs and fight it out in Memorial Park. I like this sculpture a lot. It has a superficial resemblance to the big Jean Debuffet in Discovery Green. I like the form of the sculpture itself, but I think the drawing on the sculpture is both excellent on its own and adds a lot to the totality of the piece. 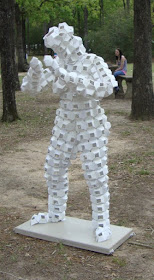 Arpi Grigorian, Universe, I'm not sure but is it possible that this is made of paper?

This very cleverly constructed sculpture has the somewhat cosmic name Universe. When I see something like this, I think that Arpi Grigorian must listen to a lot of whatever the modern day equivalent of Yes is. This is a prog-rock sculpture--brainy, mathematical, cosmic. Grigorian goes to the Awty International School over off I-10 and Post Oak.

There's more about the festival I want to write--how does it work for the exhibitors? How are they chosen? I needed to talk to an exhibitor for this, and I did. But that's another post. I will say this, though. People were buying. Perhaps this is where some Houstonians go when they are thinking it's time to get some art for the house. It is a lot less intimidating than an art gallery. The artists are here and you can actually speak to them. I think that helps people feel comfortable with buying the work. And as I said, the work here is generally more approachable than what you find in a gallery. Did I buy anything? Yes--a silk tie with a beautiful marbled pattern, some wooden toys, and a couple of small drawings that I will talk about later.
Robert Boyd at 6:01 AM
Share