The new show at the Matchbox Gallery at Rice was too big for the tiny space which had housed previous Matchbox exhibits. This show, Joy and Affect, featured 13 artists and ended up sprawled out into the Sewell Hall sunken courtyard. Perhaps to celebrate this new bigness, they projected the words "Matchbox" and "art" on the interior walls. 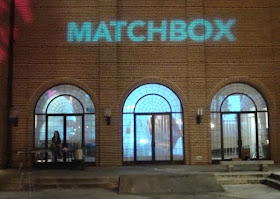 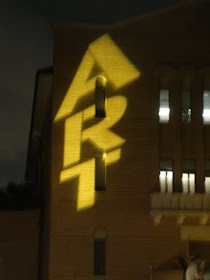 I was there early. The party hadn't really started. DJs were playing tunes, but the kegs had not been tapped.

Three separate videos were being projected on sheets hung in three big windows.

I accidentally recorded a couple of seconds of video of the courtyard, but I'm glad I did. You can really see how effective the videos were as part if the total environment.

The exhibit was somewhat problematic in one key respect. There was no exhibit list or labels so you could see who was behind the art. I think all the art exhibited was by UH students (!), but there is apparently a Rice student show happening simultaneously. In any case, except in on instance, I don't know who did the work/ If you know the artists (or are one of the artists), please let me know--I want to give credit. 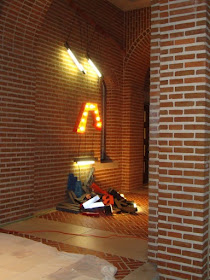 This is obviously a piece by Jorge Galvan. In fact, I think I saw this same piece at Artcrawl last year.I like the elements of it, but compared to his installation at Project Row Houses last year, this piece seems a bit chaotic. It's like he found himself with a good collection of materials but couldn't quite figure out what to make of them. 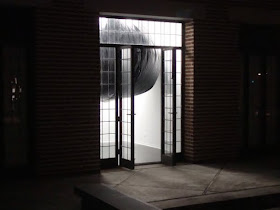 This little room is the actual Matchbox Gallery. Last night is was inhabited by this giant wrinkly balloon which slowly changed shape as a fan inside it was turned on and off. 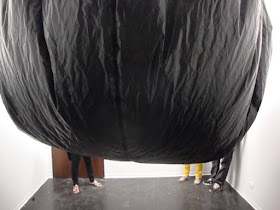 Sometimes it hang low to the ground. 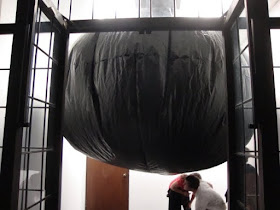 Sometimes it was pulled close to the ceiling. Hmmm. In shape and behavior, it reminds me of a certain part of the male anatomy. Whether or not the artist had testicles in mind, the piece has an eerie looming quality. 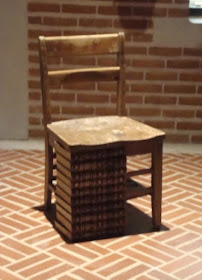 I wonder if this one is called "Seat of Learning" (or if that is just too corny). It's a well-crafted piece. It allows for multiple and contradictory interpretations. One could say that knowledge and learning, represented by the books, is one of the pillars on which human civilization rests--without it, civilization would collapse. Or you could read it as saying that mere book learning is not practical--a more more practical use for these books is propping up a chair rather than filling someone's brain with "facts." Etc. 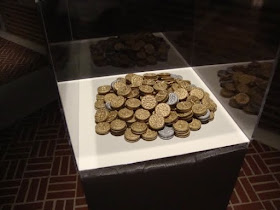 This one is both clever and beautiful. In a nice, museum-quality vitrine is a pile of gold and silver doubloons--which, on closer inspection, turn out to be gold and silver Oreos. It's a perfectly lovely bit of surrealist absurdity, made all the more delicious by the museum-like display. (Of course, no museum would simply display a pile of gold coins--it would have each coin separate.)

So, although I was confused about the show, I liked it. The created a neat exhibition environment and put some pretty nice pieces of art in it.
Robert Boyd at 9:56 PM
Share