Indeterminant Authorship at the Temporary Space

The show currently up at The Temporary Space was built around the idea of collaboration in a way, but it might be better to say that it was built on the idea of riffing off other people (with their blessings). Curator Jeremy DePrez was so into this idea that for the most part, he didn't credit the individual works in the show. After all, they all were based on interpretations and translations of someone else's work. Hence the title of the show.

The primary tool he used to facilitate this riffing was Flickr. The more I get to know artists around town, the more I understand how important Flickr is to them for finding kindred artists working all around the world. DePrez used these relationships to spark the show.

Much of his own work is based on melted and warped action figures. Several of these were on display on various corners of the Temporary Space. 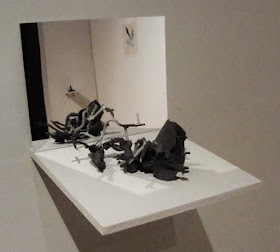 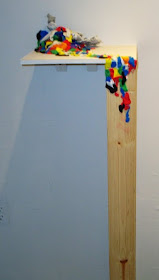 He took pictures of these toys and asked his collaborators to respond to them in their work. One of these collaborators, Geoff Hippenstiel, was just down the hall from DePrez, but made sure he only looked at the Flickr images of the pieces. He explained that consequently he didn't have an idea of the scale of the originals--in fact,  DePrez apparently photographed them made them to look huge. Collaboration via Flickr is bound to have this kind of imperfection. But at the same time, not knowing the scale of the original probably provoked some interesting reactions.

One reaction was by Argentine artist Pablo Boffelli. 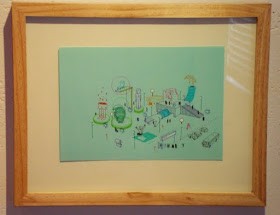 His responded to DePrez's melted action figures by making little drawings of architectural scenarios--perhaps toy architecture. They look playful and remind one a bit of Paul Klee or Boffelli's great countryman, Xul Solar--two artists for whom play was a key feature on their work.

DePrez, getting work back like this from Boffelli and others, then riffed off their work for some sculptural installations. All this riffage could have resulted in hermetic works that only make sense in the presence of the pieces that inspired them. But each piece has its own existence. The adjacent pieces aren't requirements--they are, in the words of DePrez, "art friends." 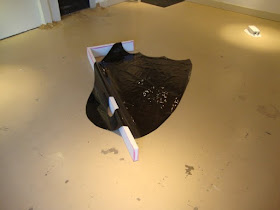 The Batman cape was inspired by one of his collaborators. The 2x4s? Maybe he was thinking by Francis Giampietro's recent sculptural work. 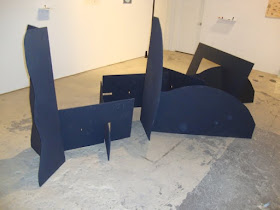 Instead of looking like a fort, it looks like a minimalist sculpture. I was specifically reminded of Anthony Caro's classic metal pieces. It's hard to leave art history behind in a gallery. 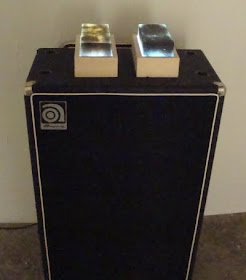 Francis Giampietro and Ivan Monforte had a rather intimate (but completely long distance) collaboration. These two bricks each contain body hair--one with Giampietro's, one with Monforte's. At the end of the show, the artists will keep the resin brick with the other artist's hair. Obviously this recalls various manhood and brotherhood rituals--becoming blood brother, becoming a "made man," etc. Monforte called this cutting of hair for trade "man-scaping." It was also suggested that the famous piece by Robert Grober with hair growing off a piece of cheese was an influence.
Robert Boyd at 9:12 PM
Share