Lots of good openings this past weekend. I'm not totally sure what to think of Alyson Souza's work. On one hand, it seems overly clever and "wacky." But what made me decide I liked it in the end was her juicy impasto. It was, in a way, the last technique one would expect for the pieces on view. 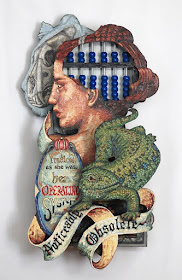 What you can't really see in this photo is that the piece is actually constructed of several overlapping pieces of wood, each painted. Also, this image doesn't give you quite the full effect of the impasto. The pieces are exceptionally well-constructed. The oddball mixture of "typefaces" (all laboriously painted by hand) recalls Victorian design, as does the Pre-Raphaelite color sense. 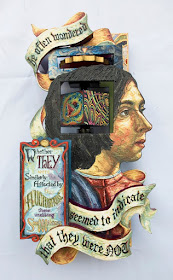 The text, with its ironic descriptions of its subjects as thinking machines, is strictly 21st century. To me, the texts are the weakest aspect of the work. While I can imagine living with the beautifully crafted and painted foaces for a good long time, I'm not sure I would want to be reading the "clever," "humorous" texts after a few years. They seem the opposite of timeless.

But that's me. And maybe after a period of time I'd stop noticing the text and concentrate on the image, the shaped of the letters, the gooey thick paint, the curves of each wooden plane--all of which are delightful. 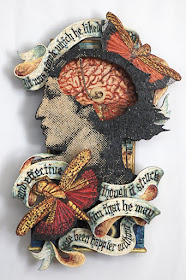 I wanted to show this one because of the "half-tone" on the face. Obviously her source is a photograph, possibly of another painting, that has been half-toned for printed reproduction. In her version of it, all those little dots are painted by hand. Amazing.

According to the Nau-Haus website, Souza is the daughter of Al Souza, the UH professor and generally widely admired Houston artist. I'm trying to think of a way to connect the work of father and daughter. Al often makes pieces out of layers of jigsaw puzzles. Alyson also layers her work, and the wood appears to have been cut with a jigsaw... That's all I got. 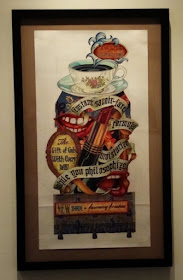 Alyson Souza, study for The Gift of Gab, water color, pencil, and collage on paper

The show also included a bunch of these very lovely studies.
Robert Boyd at 8:06 PM
Share