Comics at the Temporary Space

The Temporary Space was Keijiro Suzuki's baby, and now that he is leaving town (having graduated, his student visa is running out), I don't know what will happen with it or whether it will continue. Even if it does continue, it will be an inherently different project than it was in the past. So much of what has been displayed there so far has depended on Suzuki's particular curatorial vision, and that will necessarily change. Art spaces in Houston (and everywhere) are always in flux, so I won't count it as a tragedy if the Temporary Space closes down, relegated to art history... Something else will probably pop up in its place (after all, the Joanna recently expanded and has been showing larger, more ambitious shows).

The last show under Suzuki's directorship is Unheralded Media from a Pop-culture monologue, a group show by four cartoonists, Ted Closson, Mark Nasso and Brian and Stevie McCord. What interested me most about the show was the installation concepts on display. Art exhibits of comics require creative thinking. Most comic art consists of black ink drawings on uniform-sized pieces of white board. So if you just frame the pieces and hang them, you get something that might be visually monotonous, and also get something that doesn't pop out from the wall (if the wall is also white).

So the obvious solutions are to paint the wall some non-white color or to frame or mat the pages in some contrasting color. Nasso and the McCords opted for the latter approach. But because they were all in one gallery, they each had a distinct framing concept that made it obvious from a distance where one artist's work ended and the next began. 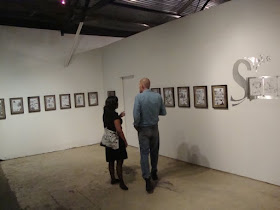 Nasso's pages were matted with a dark brown mat. It gives the work a kind of antique feel that is appropriate for the fantasy subject matter. 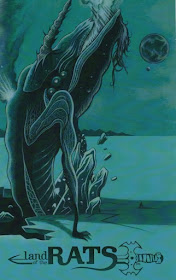 Nasso's comic, Land of the Rats, isn't exactly to my taste. To describe it briefly, imagine a more serious, less pornographic version of Johnny Ryan's Prison Pit. But judge for yourself. You can get a copy at Nasso's website, The Underground Forest. The point is that the display was appropriate for the art, and distinct from the other artists in the gallery.

The McCords are a husband and wife team who are best known as performance artists. (One of their pieces involved having sex inside a white "fuck box.") Their exhibition concept here involved mounting the pages on thin sheet metal. 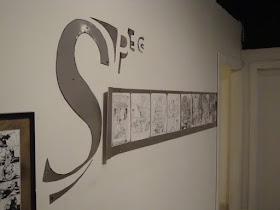 Like Nasso's brown matting, the grey sheetmetal helped the pages pop off the wall. They also had a cool concept for displaying copies of their comic, Spectacula, for sale. 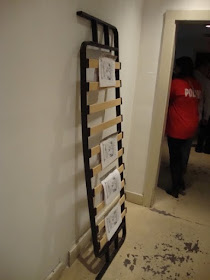 This gets to another point about art exhibits of comics--the end-product for a comics artist is usually a printed object. So if a comic is in an art gallery (whether commercial or non-commercial), it makes sense to also include the printed comics. But galleries aren't bookstores--they don't have racks set up for selling comics and graphic novels. So specific, temporary racks of some kind need to be set up, which was done at The Temporary Space. 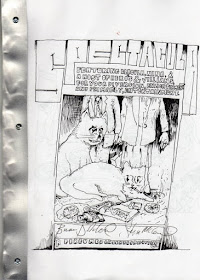 The McCord's comic was a somewhat incoherent story of a cat's quest for a job--first as a driver, then as a DJ. It's wordless and the story is a bit difficult to follow. The drawing is busy and pretty crude, which doesn't help in terms of story-telling clarity. But the result is vigorous, and they carried over their sheet-metal theme to the binding of the comic. It is bound with a folded piece of thin sheet metal, held together with three tiny nuts and bolts.

Closson had the most difficult display issues and the most interesting display. I've written about his work before. When it comes to displaying his work in an art gallery, he has one big problem--there are no physical originals. Even though his scratchy line-work looks totally hand-made, he actually produces it on a computer. So what do you display in this case? Closson's perfectly post-modern solution was to show process. 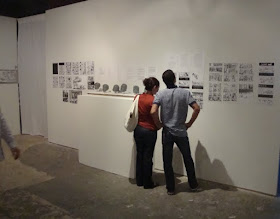 Like other cartoonists, Closson actually makes clay models of his characters. One of the most common but most overlooked aspects of comics is that an artist draws the same characters over and over. Clay figurines or busts allow the artist to draw this or that character from different angles, while maintaining a consistent visual appearance. Closson displayed some of his clay busts here. 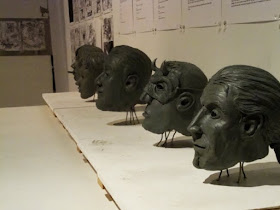 He also showed script pages and printed-out art. Basically, a close observer would get a pretty good idea of how the finished product came to be through all this stuff.

Closson, too, came up with a visually interesting way to temporarily display his minicomics for sale. 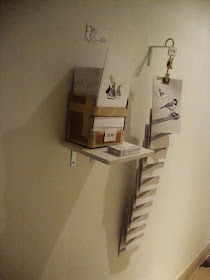 The comic on sale was Never Worn (the title comes from the famous six-word short story by Ernest Hemingway: "For sale: baby shoes, never worn"). 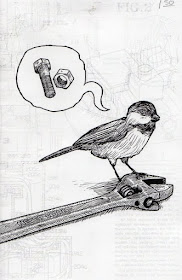 The story is an exceptionally economical telling of a story that resembles the first half of A.I. I won't say more lest I spoil it.You can see more Closson work here.

Finally, a back gallery had a slide show running of art from the show. It seemed pretty superfluous, but also was kind of cool the way they did it.

If this really is the last Temporary Space show, it's a good way to go. And I think it will be instructive for other Houston curators who want to show comic art.
Robert Boyd at 5:39 AM
Share