Readers of Pan know I am into comics as well as other kinds of visual art. (I always worry that I am boring the "art people" with all my comics posts). I am also really interested in the intersection of these two worlds, which are pretty distinct but overlap somewhat.

I have Art 21 on my RSS feed, and this popped onto my Google reader a couple of weeks ago.


Born in Oakland, California, Ali Fitzgerald is an artist and writer living (and occasionally working) in Berlin. She holds a B.A. from Davidson College (2004), attended the Skowhegan School of Painting and Sculpture the same year, and received her M.F.A. from the University of Texas at Austin in 2007. Her work has been featured in the New York Times, Art in America, and Artlies! She has also collaborated with Artlies! on their visual space and written for ..might be good. She is represented by Houston’s Art Palace and her work can be found in the Drawing Center’s Viewing Program. Most recently, she showed at the Center for Book Arts in New York and started a Berlin comic diary, found here.

Hey, I read ...might be good and Artlies!, and I like Art Palace, and she does comics. Interesting coincidence. So I checked out her work--with some trepidation. I think comics people might know what I mean. When someone comes from the art world to do a comic, the result can be pretty disappointed. On one hand, they sometimes come to it without the baggage of tradition (I wrote about this in discussing Anke Feuchtenberger's work). But sometimes comics by visual artists just don't work as comics--they just don't get the idea of how sequential images might work as a narrative, or even if they do, they end up producing something trite and inconsequential. But Fitzgerald seems to dodge those bullets. She has a story she wants to tell, and the ability to tell it. (I reserve full judgment until I see more work, though.) 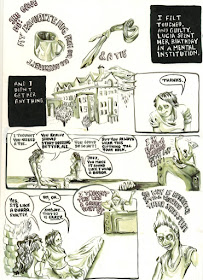 Like virtually all cartoonists, Fitzgerald draws herself as a sad sack. But here's what she actually looks like. 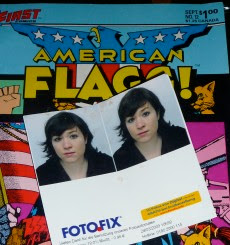 It amazed and amused me that she used an American Flagg! cover as the background. It was as if she were reasserting her American identity as an expat. But there is something else there. American Flagg! was about a decadent future post-collapse America that has been rebuilt by a corporation on Mars. Fitzgerald is in a semi-decadent Berlin that has been rebuilt by various corporations as well. The myth of Berlin is something she embraces.


Only now I wheeze and roll my eyes at brash, middle-eastern scarfed Americans coming to Berlin in search of some Bohemian Bowie dream.  And finding it really.  I mean, it exists and even flourishes here.

The idea of Bohemia and it’s pratfalls interests me a lot.  [...] In Berlin, being poor is a kind of status.  I mean, everyone I know wants money, and there certainly are herds of trustafarians scampering about.  But generally, at least in my circles, there is a disdain for the high life: a shared kind of financial fatalism.

My former roommate Lucia epitomized Bohemia for me.   Weeks of only eating potatoes.  Smoking my leftover butts like Jack Kerouac.  A retro view of bodily performance, an investment in Jim Morrison and PJ Harvey, an older idea of what it means to be an artist.


Hence the graphic novel. Only the first batch of pages has been put on line, but Fitzgerald says she has plenty more. I hope to see them soon.

What does her non-comics work look like? Take a look at this: 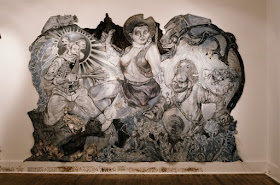 Perfect for someone going to Berlin intent on embracing bohemia, no? It has a lot of Otto Dix in it, along with a splash of the all-American decay of Ivan Albright. And the piece is huge. 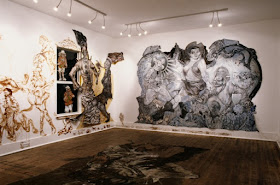 It would be a brave (or at least eccentric) collector who hung that baby on his wall.

So this graphic novel looks like it might be good, but I hope Fitzgerald hasn't given up on her non-comics work. I look forward to seeing more of her work (at Art Palace, perhaps?) in the future.

(As far as mixing up comics and art, Art 21 is not afraid to do it. See this recent post. Not only does it make its point with ease, it also is an almost perfect example of demonstrating the difference between comics that are art and comics that aren't. In the world of comics, this is an unusually contentious subject!)
Robert Boyd at 10:48 AM
Share