The Other Big Show at the Houston Center for Photography

It seems like bad planning for a Houston art space to open their big juried show on the same weekend that Lawndale opens The Big Show (which I plan to review). But that's what the Houston Center for Photography did. The 28th Annual Juried Membership Exhibition opened July 9. (Another problem--give it a snappier name! Everyone remembers "The Big Show"; the "28th Annual Juried Membership Exhibition" does not fall trippingly from the tongue.) The show draws from photographers who are members of HCP. I don't know how big that pool is--it's pretty expensive to become a "photographer/member." Still, as this exhibit shows, people from all over the country join up.

The photos were selected by Hannah Frieser, director of Light Work, a photography institution in Syracuse, New York. Most artists had several images selected. Some were bravura examples of photography, really pushing what a camera can do to produce an image that makes a viewer stop. Some were more traditional photos--a place where the light and image were just right. Many were posed or had a scenario created for the camera. And quite a few depended heavily on post-photograph digital effects. Like this one: 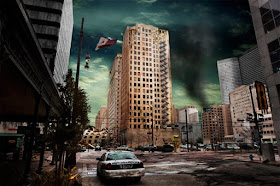 This photo is of the moment--for some reason, our culture is thinking a lot about post-apocalyptic scenarios. It is showing up in literature, pop fiction, comics, movies, etc. Sometimes the subject is thoughtful and meditative (The Road, Oryx and Crake), sometimes it is a thrill ride (various zombie movies). I think Katrina might be one reason why this theme has gotten so popular. We don't know what happened to downtown Houston in Cobbley's photo. Was this the result of some localized disaster--a Katrina-level event--or something that happened everywhere? Cobbley lives in Kingwood, a suburb far to the north of Houston, so maybe this photo represents a suburbanite's view of the city! 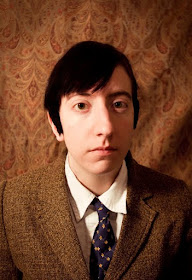 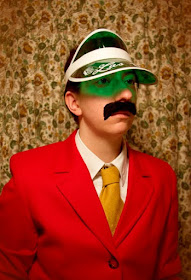 Head is working in a way similar to Cindy Sherman. She dresses herself up, creates a different identity, and captures that alternate identity photographically. Her alternate identities in this series are men. Frieser writes that these are "sleazy men of dubious backgrounds." That's generally true, but not necessarily so with the man in Paisley. He seems like a meek little nobody from the 1930s. While Head obviously goes through a lot of trouble with the costumes, she doesn't go for total illusion. It still is pretty obviously someone dressed up. Little things, like unrealistic sideburns, jump out at you. She therefore brings a little theatrical alienation effect into the photos. That makes them ironic and amusing to see. The weird thing--and I hesitate to admit this--is that after seeing a bunch of personas and abstracting the "real" Head from them, I find her really attractive. (I won't attempt to psychoanalyze myself, but feel free to do so at home.)

A more traditional photograph is this one by Deborah Hunter. 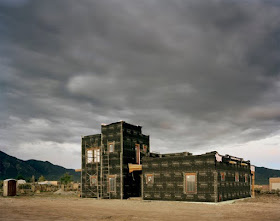 What I like about this photo is that there was a perfect moment and a perfect place to take it and make it beautiful. At any other time, if you were driving by, would you have given this construction site a second glance? It's inherently ugly, in fact. But Hunter makes it beautiful. In this way, Hunter is the opposite of Head, seeking epiphany instead of distancing.

This is one of two pictures taken with extremely distorting lenses that struck me. Stratton's picture is almost a stunt, showing perspectives of four alleyways at once. But what I liked about it is the detail. It shows a street that is not busy (who knows how late it is) but that is nonetheless alive. This one is really worth seeing in person (they all are, but this one in particular). Looking into each store, down each alley--there is a lot to see there.

Greenberg seems to have used a similar technique as Stratton in this photo. It's part of a pair--the other shows Daulat with his wife and daughter at home. The contrast between the two is striking--the home, unlike the store, is spacious but spartan. It's as if Daulat decided, I work among visual clutter--at home I will rest my mind with modernist minimalism. 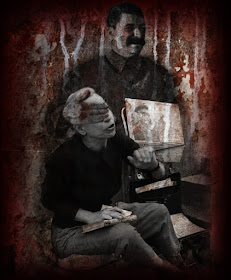 This photo doesn't quite work for me as a photo, but I am intrigued by the story implied. The ghostly Stalin, the red dripping background (blood?). What is going on here? Why is Stalin covering the woman's eyes? There is a powerful moment in Orlando Figes' book The Whisperers when a Antonina Golovina, the daughter of "kulaks," was visiting Shaltyr, the Siberian "special settlement" where she had lived with her family in internal exile in the early 30s. Another woman there mentions she had lived there and that she was a "Kulak daughter." Golovina, who had lived her whole life hiding her "kulak" origins, realized that she no longer needed to be ashamed and no longer needed to hide her status. For people like Golovina, this hiding away was one more toxic effect of Stalinism. For her children, it was as if the ghost of Stalin was covering their eyes about the lives of their parents and grandparents--victims of Stalin's purges. 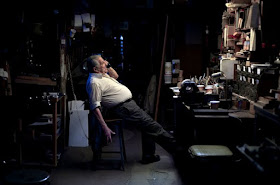 This photo is from a series called Custom Machinery, which consists of photos of machine shops in New York City. Frieser suggests these are dying business--no one gets machines repaired. They just toss them out and replace them. That is certainly true of cheap machines, like clocks. But not so much industrial machines. Machine shops of that sort exist in industrial neighborhoods in Houston and Lake Charles and any other city where the oil and gas business is big. But perhaps they are an anachronism in New York City. I like this photo because it seemed so perfectly composed while being completely realistic. The death of Harvey Pekar has made me think about depictions of work in art. The risk is a kind of sentimentality--pictures of exploited workers, noble miners, etc.--or a kind of advertising gloss--pictures of smiling people looking at documents, or high-tech looking assembly lines. This one avoids both those tiresome cliches. Even though I work in a well-lighted office very different from Hugo's cluttered machine shop, I felt a commonality with him.

This exhibit runs through August 22.
Robert Boyd at 10:56 AM
Share