The Data Art of Brian Piana

Readers with longish memories will recall that I interviewed Brian Piana last year about his project (with Aram Nagle and Heath Haynor) called Wishing Well for Houston. I was especially intrigued by the project because it was a highly unexpected piece of data visualization. The piece was a large plywood construct that formed a map of Houston as divided by "super-neighborhoods." What Piana, Nagle, and Haynor did was to take the average income for each super-neighborhood (as taken from the last census) and transform that income number in to a height. The highest incomes--Memorial and River Oaks--were built up in this map to be quite tall--over six feet high. The lowest income neighborhoods were quite close to the floor. Inside each super-neighborhood's wooden box were chimes. The idea was that guests would throw coins into the super-neighborhoods, ringing the chimes. (At the end of the show, the money was gathered up and given to Avenue CDC.)

This was my first exposure to Piana. His work seemed quite different from other work I was seeing around Houston. I was told he would be a featured artist at this year's Winter Holiday Art Market, so I took the opportunity to contact him and ask him a little about his art. He showed me around his studio (which was a tiny room with a computer and a table for painting) and we talked about using data as a source for art.

We live in a society brimming with data. While lots of this data has always been available to intrepid researchers, the internet has made it super-available. It's astonishing what datasets are available to the public, both from government and private sources. The U.S. Census website is a goldmine. I regularly use data from the BLS and EIA in my job, as well as data from private companies that share reams of it publicly. With a giant spreadsheet and a little statistics, you can be really dangerous. Add an ability to do data visualization, and you really have something powerful. Of course, most visualizations of these sorts are motivated by the desire to communicate information in an efficient and easily graspable way--these are the charts and graphs you see in the news. But there is no reason why data shouldn't be a subject for artists.

In the sixties, it was said that Pop artists, by taking commercial images as their subject, were acting as "painters of modern life" in the sense of Baudelaire discussing Manet. Our modern world, where individual people go out of focus and become statistics and media noise, calls for a different kind of art. I would say then that contemporary artists like Piana depict modern life by using data as their subject.

Piana studied visualization science at Texas A&M and went to work for a tech company at the end of the tech boom. But he was interested in the artistic side of visualization, and went back to get an MFA at UH. (He also needed it if he hoped to teach art. He now teaches at San Jacinto College.)

The data that interests him the most is the continuous stream of data that comes over Twitter. There is an obvious appeal here. Twitter doesn't allow you to write much. Personally, I can't stand it because there is literally nothing worth saying that I can say in 140 characters. But I'm obviously in the minority, as much of America and the world blurts out whatever thought comes into their minds on Twitter. Twitter is like the world with tourettes, the collective id. The seeming lack of a filter on Twitter obviously appeals to Piana. But there's something else about Twitter he likes. Because Twitter wants third parties to write apps for it, they make it possible for programmers to access every Tweet.

Piana, working with a programmer friend to help him write Twitter scripts, has taken advantage of Twitter's openness with its data to create several artworks. One is a web page, The Journal of the Collective Me. Everytime the word "me" shows up in a Tweet, this page notices it. By clicking on the page, you will see the most recent Tweet with the word "me"--stripped of context and authorship. We don't know who is Tweeting or why. The results are banal, obscene, tragic and often hilarious.


me: a yo mom i love u a yo mom whats for dinner a yo mom lets play wii Ha shes getting so annoyed lmao


I've looked hard at myself and realized everything is wrong w| me. nobody stays and everybody pushes me away


when i tell people i dont have a facebook, they look at me like i have some infectious disease that they could catch.


These are all from the last few seconds! This is a piece of art using data from the internet that exists only on the internet. For Piana's most recent project, he takes Twitter data and turns it into a physical object. 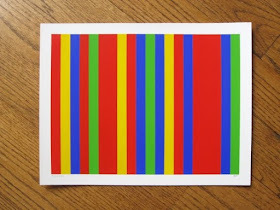 RGB and Sometimes Y starts with yet another Twitter script. This time, the script looks for Tweets that contain the words "red," "green," "blue" or "yellow." The script converts these each use of one of the words into a vertical band of color. The bands are placed next to each other in the order that the words are used. So far, it's an entirely automated, electronic process. But at this point, Piana intervenes. He looks at the images of the stripes on his computer monitor. If he likes an image or part of an image, he saves it. Then is a surprising reversion to preindustrial craftsmanship, he carefully paints the image by hand. 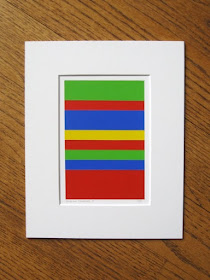 The paper is heavy Arches paper with a coat of gesso on it. The colors are liquid acrylic (chosen because it goes on smoother than paint from tubes). He mixes the green and blue--the red and yellow come straight from the bottle (Golden brand naphthal red and primary yellow). When he was working with larger pieces in a larger studio, he would use rollers to apply the paint in order to show an "absence of hand." As it is, you have to look very carefully at the pieces to see the facture--the minute imperfections, the tiny parallel ridges left by the paint brush dragging the acrylic across the paper. But from a distance of more than a few inches, that is all invisible.

These are the paintings that Piana will be showing at WHAM. Sales of these works will benefit both Spacetaker, the sponsor of WHAM, and Skydive, a artist-run multi-purpose institution that Piana belongs to. (They were located right under the Sky Bar on Montrose. I haven't yet been to Skydive's new digs on Norfolk. I'm sure the view is not as nice, but it is conveniently close to Star Pizza.)

As we were talking about RGB and Sometimes Y, I asked Piana if it would be possible to associate other words to the colors he uses. After all, you don't have to be Ferdinand de Saussure to realize that the link between the word "red" and the color red is completely arbitrary. So Piana indulged me and changed the script so that "Picasso" was blue, "Warhol" was green, "Koons" was red, and "Woodman" (because I had just seen the documentary The Woodmans) was yellow. This is what he got:

Piana points out, however, that this Woodman isn't Francesca Woodman but author Marion Woodman. So I guess it should be called "Three Artists and a Writer."
Robert Boyd at 6:37 AM
Share