I Saw Boogie Woogie So You Don't Have To

This is not a review of Boogie Woogie. I don't have anything to say about it as a film beyond what has been said in the reviews in the New York Times and DVD Talk. I pretty much agree with what they wrote. It's not a dreadful movie--it's definitely watchable, but only just.

Briefly, the film is set in the London art world. There is a blue-chip gallery owned by Art Spindle (Danny Huston), a pair of collectors, the Maclestones (Gillian Anderson and Stellan Skarsgård), a pair of artists (Jack Huston and Jaimie Winstone), a pair of gallerinas at different stages of their careers (Heather Graham, whose character is about to quit and start her own gallery, and Amanda Seyfried, who has just been hired), and an older couple who own a Modrian that everybody wants (Christopher Lee and Joanna Lumley). Alan Cumming plays the enabling friend of Elaine, the lesbian video artist; he helps her career and gets nothing in return.

One thing really interesting about the movie was that it featured a lot of blue chip art. It didn't try to fake it, as many movies do. The art on screen was curated by Damien Hirst, and it is not surprising that the film features a lot of Hirst work. 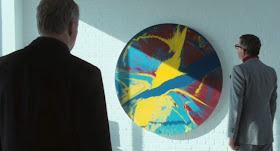 He even seems to have fabricated a piece for the film. Paige Prideaux, the Amanda Seyfried character, has a medical emergency which results in a teratoma being removed. Bob Maclestone then commissions Hirst to make a really gross artwork out of it. 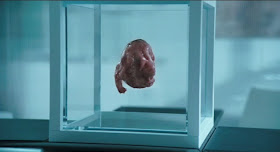 The Maclestone's apartment is loaded with art. 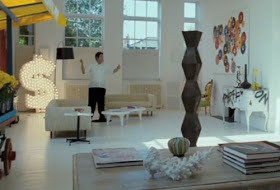 I can't identify all the pieces here, but the flower cart is by Michael Landy, the $ by Sue Webster and Tim Noble, and of course the Brancusi. 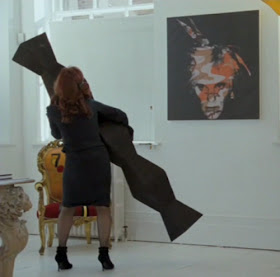 Not to mention a Warhol. 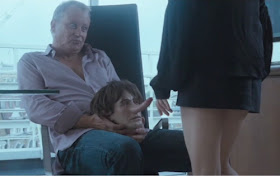 And Jake and Dinos Chapman. This movie has a lot of sex in it (all of it kind of horrible and compromised--which this image really speaks to).

Boob lovers will enjoy this movie. Heather Graham's character gets a boob job so she can have "power breasts" (I remember in the 80s when a yellow tie was, for some reason, called a "power tie" on Wall Street--thanks to Spy for telling me this. But this was the first time I had ever heard the term "power breasts.") She is breaking away from Art Spindle to start her own gallery, and has snagged Elaine, the lesbian Casanova who videotapes her conquests, for her opening. This is the scene where Graham is showing Elaine her new "power breasts". 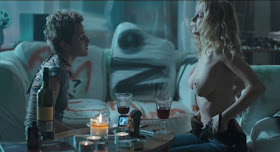 Elaine then decides to show hers. 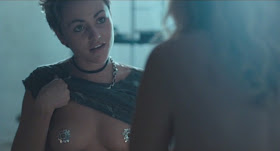 Then she seduces Graham's character--while surreptitiously  videotaping it. 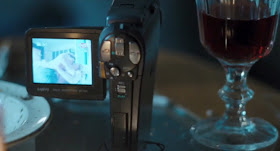 Elaine comes off as a combination of Nan Goldin (in her obsessive documenting) and Laurel Nakadate (in her exploitation of her subjects). Secretly filmed sex is hardly the worst thing that shows up in Elaine's video art.

I would like to see a movie set in the art world at a lower level than this--not the blue chip world but the world that I encounter weekly, which is far larger than the tiny blue chip world. It might be hard, though, to find all that much drama there...
Robert Boyd at 11:47 AM
Share