This is a "catch-up" post for a bunch of things I have gotten in the past few months (!) that I haven't written about. The big one is a page by Jaime Hernandez. 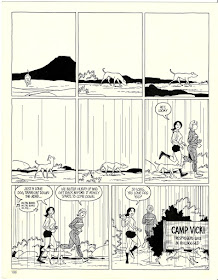 This is not the most spectacular Jaime Hernandez page (which is probably why I could afford it). But it is an elegant example of his work. This is from a story called "Bob Richardson" which features two full pages of Maggie getting slapped in the face by everybody she has ever known, a dog with a telepathic link to Isabel, and a low-level traitor named Boyd (!).

Back on September 18, The Joanna had their "gala," in which I came dressed as Pan. They had an art raffle, which they set up the same way that Box 13 did theirs earlier in the summer. Because the raffle tickets were really cheap, I ended up winning three pieces of art. 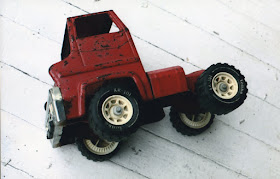 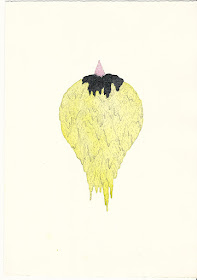 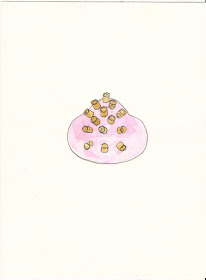 I didn't know much about Molly Gochman, Emily Link and Jessica Ninci when I won these. Gochman is highly regarded enough to get big public commissions and to be featured in that massive Texas Artists Today book. Jessica Ninci is currently a student getting her BFA at UH, and she was part of a group show ar the Joanna earlier this year. And I've seen Emily Link's plush heads in various venues, including some that are up at Box 13 right now.

PictureBox is a really great small press art comics publisher, and like all small presses, they are chronically having to figure out how to pay for their projects, particularly those that are large and expensive. I can tell you from personal experience that the lag between the expenses on a publishing project and the revenue is a long time, and for a small press, that can spell bankruptcy. That's why so many small presses try to get grants for specific projects because it moves the revenue stream forward in time.

For a pair of books, PictureBox did something innovative to move that revenue stream forward. Two Fort Thunder alumni had books in the works, If 'n' Oof by Brian Chippendale and Powr Mastrs [sic] #3 by C.F. (the pen name of Chris Forgues). If 'n' Oof was an especially ambitious (and expensive) book to print--800 pages long. So they put out word that if you bought these books up front--way in advance of publication--you would get some free artwork by C.F. and Chippendale. 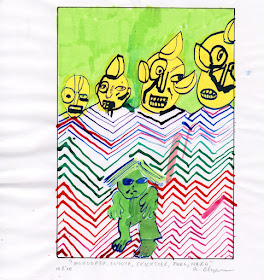 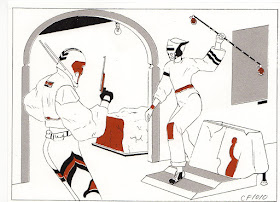 The grey areas in the C.F. silkscreen (if indeed that is what it is) are actually silver ink.

Yesterday I stopped by P.G. Gallery to see the latest exhibit, and I noticed there were still some Gabriela Trzebinski slats available from an earlier show. Since they were only $30, I went ahead and bout two.

Gabriela Trzebinski, Voice of the Ghetto (from the Matatu Sticks Project), acrylic paint on recycled wood, 2010

Now you might ask yourself why I got these. American Thunder I just liked because it made me think of Bob Segar and Dodge Ram Pick-ups. As for Voice of the Ghetto, people have often said to me, "Robert, even though you are whiter than Dick Gephardt and are a known fan of both The Decembrists and Belle and Sebastian, you are truly the voice of the ghetto."

Finally, I went to the opening last night at Box 13 and they had another raffle. This time, you didn't get to choose the art that you won. However, there were no rules against trading. That's how I ended up with this:

Maria Smits is a Dutch artist who has somehow landed in Houston. She has a show opening November 19 at Lawndale. And I'm afraid my photo utterly failed to capture the extremely delicate pen and ink work in this piece.
Robert Boyd at 4:04 PM
Share