Books I Got in Brooklyn--The End! 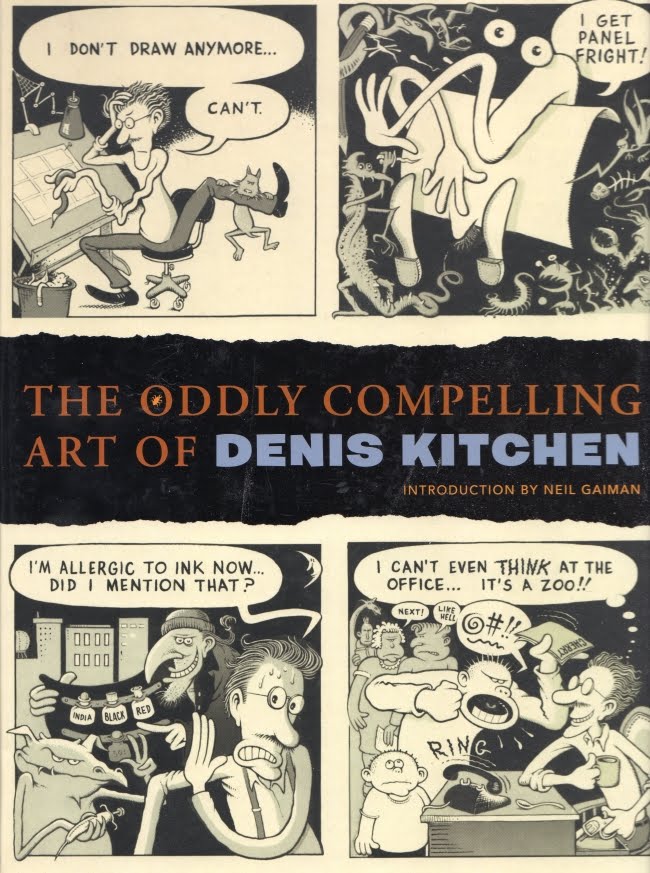 Kitchen started off his career as an underground cartoonist and underground newspaper designer/editor/illustrator in the late 60s. Initially he was self-publishing, but like other reasonably-successful self-publishers, he quickly attracted others to his orbit and went from being a self-publisher to being a publisher of other people's work. His publishing company was called Kitchen Sink Press. I think you will find that in the history of publishing, becoming a publisher is the death knell for one's own creative work. It's too hard to successfully wear both hats--artist and impresario. So even though Kitchen had a highly enjoyable drawing style, as time went on he drew less and less.

At one point in the mid-90s (I think), comics writer Alan Moore suggested in print that Kitchen's art was actually really good and should be collected into a book. He even came up with the title. But Kitchen had been a publisher for so long that I think he felt something like this would be a vanity project. He always thought other people's work was better than his own. (In addition to being a publisher, he was and still is also an avid art collector.) But after a series of setbacks and bad publishing bets, Kitchen Sink Press folded in 1999 (after a 30 year run, which is well on the high side of the median life-span for small press publishers). He remained involved in publishing, working as an artists' agent and book packager. And finally Dark Horse Comics has published a book of his art. And it's kind of a revelation. 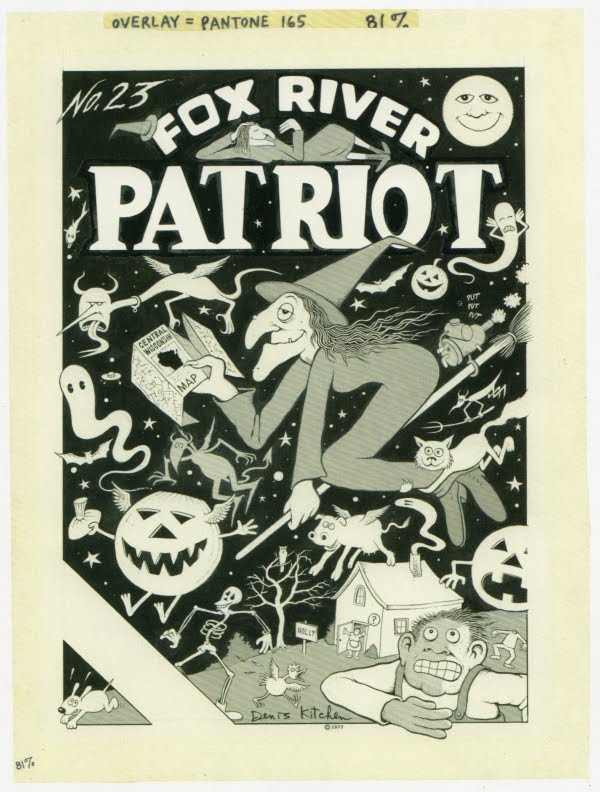 Kitchen was my employer for several years, but even I was surprised by most of this stuff. I knew he had been on the staff of an underground paper (the Milwaukee Bugle-American) but I didn't realize that it lasted eight years before folding in 1978. Kitchen also worked on a rural alternative paper, The Fox River Patriot, all while running Kitchen Sink Press. The covers and illustrations for these two papers make up a good portion of the book, and they are really great. Kitchen's drawing was whimsical and light-hearted--rather out-of-step with his underground comics peers (I'd put him closest to Willy Murphy and Kim Deitch, two other underground iconoclasts).

The Oddly Compelling Art of Denis Kitchen is a treasure trove.  Not only is it full of excellent art (Kitchen seems to have saved everything), the biographical essay by Charles Brownstein was full of hilarious details about Kitchen's life that I didn't know. (Not only was he a member of the Socialist Labor Party in the late '60s, he was by far the youngest member.) It is also well-annotated and beautifully designed. A long overdue book! Now maybe Kitchen will get back to the drawing board and start on volume two.


Shary Boyle is a Canadian artist. I'm not sure if she has ever done any comics, but she does seem to have links to the artier suburbs of that world--she has exhibited at Fumetto, the very artsy comics festival in Lucerne, and in her book, Witness My Shame: Bookworks and Drawings she thanks Megan Kelso. her drawings have a comics feel to them. That said, they are drawings. They don't have word balloons or stories really. Most of the work in this book was originally published in artists books. 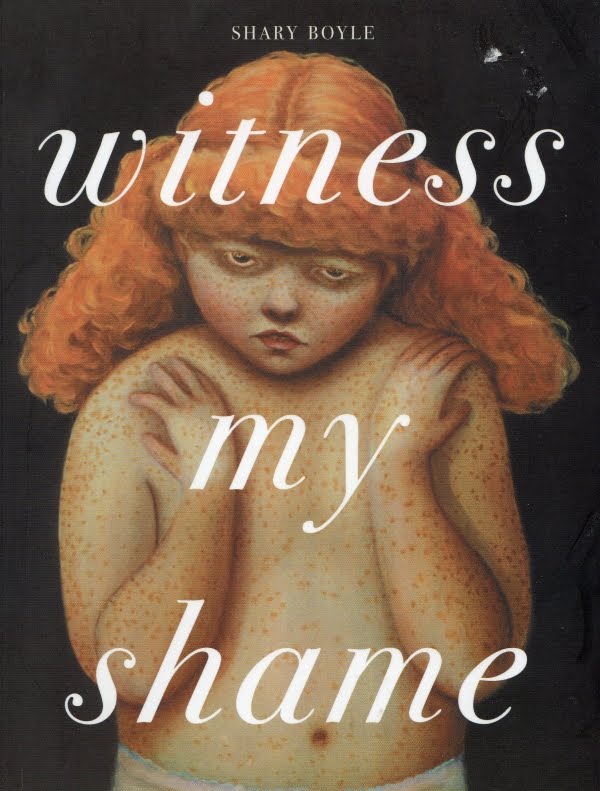 The thing about these drawings is that they are both funny and uncomfortable. I should qualify that. Uncomfortable if you're a guy. The first artists' book recreated, also called "Winess My Shame," is a series of clumsy pencil drawings of girls screwing up in public--some of the situations pretty fanciful, some all too real (a girl running away from a friend's house crying after having wet her pants). 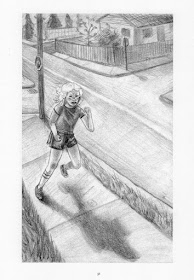 "Schoolgirl Bullies" feels pretty real, too, and there is something uncomfortable about seeing these evil faces on little girls. I'm scared of these girls. (Unlike many of my friends in both the art world and the comics world, I was never a victim of bullies as a kid--I was too big and strong for them to mess with, and I was an athlete. But if I had been 25 or 30 pounds lighter...) 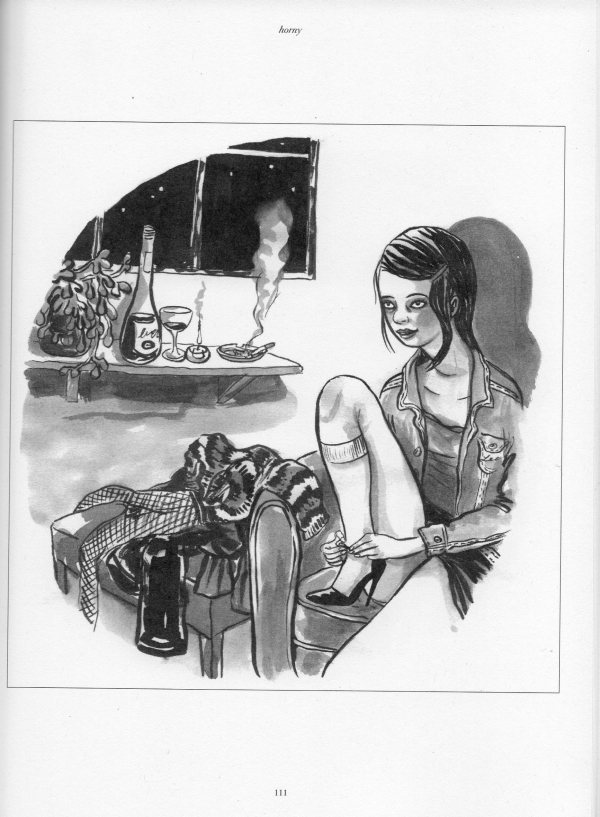 Boyle's current work seems to be mostly ceramic--really kitschy looking pieces made of slip (I think). They remind me a little of Bari Ziperstein's work. They look fantastic--I'd love to see them live and in person.
Robert Boyd at 8:12 PM
Share