The Brooklyn Comics and Graphics Festival

I mentioned back in September that I was going to the Brooklyn Comics and Graphics Festival. I went, had fun, took photos. I also got a lot of books and comics, and I'll be writing about them in the coming month. But this post will be about the experience--and I'm writing it mostly as an excuse to inflict my terrible photos on you all. (If you want to see much better photos of the event, read this.) Now Pan readers who come here for the art coverage might find their eyes glazing over. But this festival is relevant to art lovers--it was put on and attended by a bunch of people who view comics as art, and among them are many who cross-over to the gallery world, whether in their own practice or just as people interested in art. I still think there is a distance between these two worlds that doesn't need to be there, but the Brooklyn Comics and Graphics Festival certainly represents to largest overlap of comics and the fine arts world. (Many in the comics world would cringe at this. But I guess what I want, and what I think this show represents in a way, is a comics world that is engaged with serious culture as opposed to one that is only engaged with the kitsch of the world, which is what you would mostly find at the San Diego ComicCon, for example.) 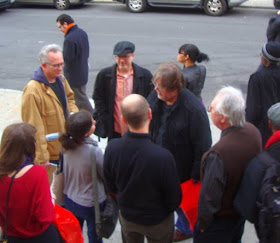 Gary Panter, Matt Groening, Bill Griffith and a bunch of other people

The people who were there were amazing--guests, exhibitors, and attendees. This is a young person's show, but the organizers made certain that a lot of people of my generation and of older generations were present. The show was put together (I think) by Dan Nadel of Picture Box, Gabe Fowler from Desert Island, and comics scholar Bill Kartalopoulos. Nadel is one of many people involved in comics who has been working on creating a new history of comics. By this, I mean trying to imagine a different canon. He has work in this regard in his two books Art Out of Time and Art In Time and to a certain extent in what he publishes in Picture Box. This kind of project is appealing to me. People are always reclaiming history (aesthetic or otherwise) to understand the present. See for example art critic Rapheal Rubenstein's The Silo.

Why this is relevant is that this show featured older guests--an attempt, maybe, to school the young hipster guests. Hence guests like Mark Alan Stamaty, who is not someone who is well-remembered in comics despite the fact that he produced a number of brilliant books over the years, especially the great MacDoodle Street. 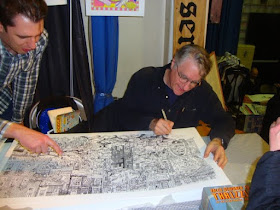 He shared a panel with Jordan Crane, Brian Chippendale and Keith Jones, mostly on the subject of horror vacuii. 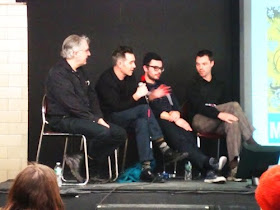 The panels were quite nice. Lynda Barry and Charles Burns were great--Barry is hilarious in person. While Sammy Harkham (editor and publisher of Kramer's Ergot) and Francoise Mouly (co-editor of Raw and current art editor of The New Yorker) tended to ramble, they were entertaining. 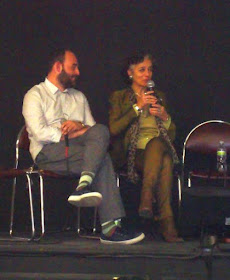 So this revised history puts underground cartoonists like Kim Deitch in a pantheon. 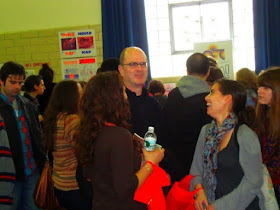 And creates a situation where a cartoonist like Charles Burns gets mobbed. 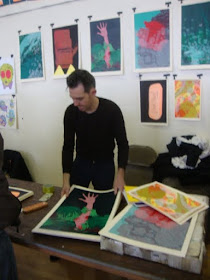 For me, it was great to see old friends like Jordan Crane... 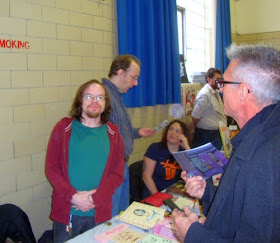 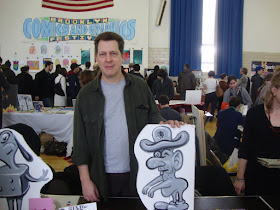 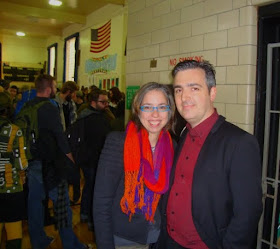 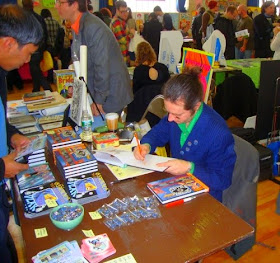 Little was debuting his new book, The Motel Art Improvement Service. I'll definitely be reviewing it later, but one thing that is really interesting about this book and the preceding volume, Shutterbug Follies, is Little's familiarity with contemporary fine art. Here he was dressed, as he always does for conventions, in an extravagant outfit. He used to include a straw boater or top hat with costumes, but he told me that when he would wear a top hat, he would end up getting bothered by steampunk fans, thinking that they had found one of their own. (Fiction fans may be interested to know that Little is married to novelist Myla Goldberg. The main character in his graphic novels is named Bee, which can't be a coincidence, can it?)

The space was packed with humanity. Despite temperatures outside in the 30s, it got really toasty in the church hall where the festival was held. Little asked me to spot his table so he could go to the restroom and shed his longjohns. This is what his table looked like from the driver's seat perspective. 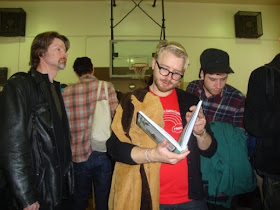 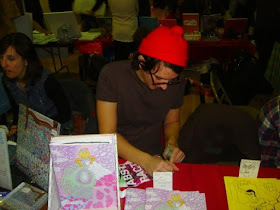 I think this is Pat Ausilio, who did a comic called Abstracted Comics. I liked this because despite the fact that it was 80-something degrees in the building, he kept his toque on. That is hipsterism above and beyond the call of duty. 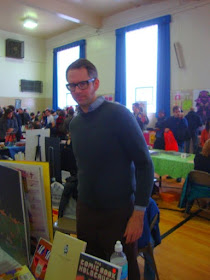 This is Johnny Ryan, the lowbrow cartoonist embraced by highbrow comics lovers. 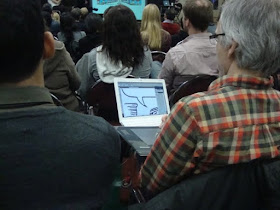 This guy was so hardcore that he worked on a comic while attending a panel. Tight deadline, I guess. Update: This is apparently Bob Sikoryak. 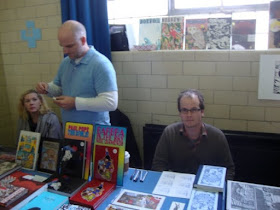 This is Chris Pitzer (proprietor of AdHouse) and one of the artists he publishes, the excellent cartoonist Josh Cotter. 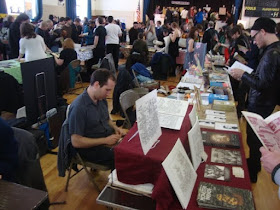 Ben Catmull had a space right next to Jason Little's. 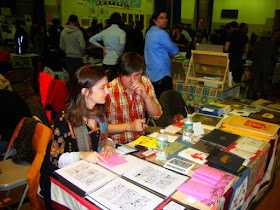 This is Gabrielle Bell and (I think) Tomasz Kaczinski. Bell was selling her original art, which is literally the smallest original art I have ever seen except maybe for Drew Friedman. In addition to selling individual pages, she was also selling individual panels. As I understood it, these were panels she completed but decided not to use. I bought one of those-- 2.75" square.

One final photo. I stayed in a hotel two blocks from the festival. And just around the corner was Desert Island, which I have to say is my ideal comic shop. 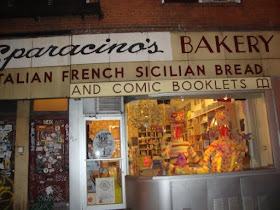 It is filled 100% with art comics and pretty much nothing else.
Robert Boyd at 2:27 PM
Share