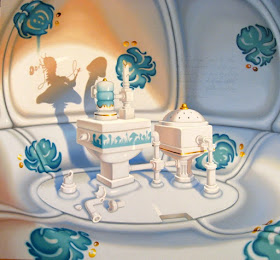 These paintings by Norwegian artist Bjørn Båsen on view at the Anya Tish Gallery, when you look at them at first, strike one as unusually rich, sugary pictures of the kind of ceramic objects that granny might possess, but ratcheted up a notch. (When I saw them reproduced small online, in fact, I thought they were photos of elaborate delftware.) But when you look at them more closely, you notice two things. First, the shadows behind the objects don't exactly match up to the objects themselves. Second, there is text reproduced on the surface of each painting--but it is subtle. The text is not painted on, but embossed. (You can't see the text in these reproductions. If you want to experience that aspect of the work, you'll need to check out the paintings in person.)

So in this painting, the text starts "She peeped over the edge of the mushroom" and is from Alice in Wonderland. And the shadows depict the caterpillar smoking a hookah with a very phallic mushroom beside him. At first you might think this was a piece about how imagination works--how ordinary shadows could inspire Lewis Carroll's fantastic imagination. But this doesn't seem quite right because the weird ceramic objects are themselves quite bizarre to begin with. For one thing, not only is this object which is casting the shadow bizarre (what could it be for?), but it is inside a much larger ceramic object. In short, this painting--and the rest of the series--defy obvious interpretation. Instead, I think the viewer (this viewer, at least) is left with a very pleasant sense of mystery. The fantastic pervades the work--the references to Alice in Wonderland reinforce that (but perhaps needlessly). 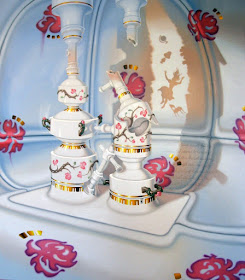 This weird, broken double samovar manages to cast a shadow of Alice falling down the rabbit hole. 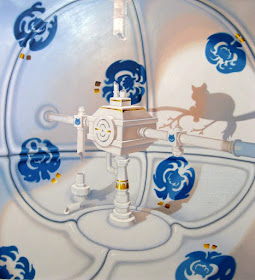 And the Cheshire Cat appears as a shadow to these ceramic conduits (which remind me a little of well-heads, the pipes and valves on the top of oil wells).

What happens when you do a similar kind of painting, but with a different literary reference. The pieces above are fantasy squared--the literary reference reinforces the strange unreality of the image. Not so with the two "Prism" paintings. 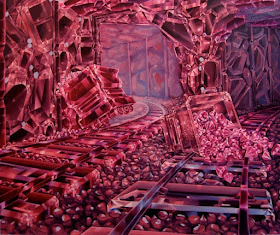 Here the text is from Germinal by Emile Zola. Again it is embossed on the canvas. Zola was a naturalist, highly concerned with documentary accuracy. Germinal was his novel of the brutal conditions under which coal miners labored, and the attempt of some of them to strike. An image of a mine filled with purple gems, where even the mine carts and tracks are constructed of this purple gem material, is again utterly fantastic. Even more than the weird ceramics in the other paintings, these "Prism" paintings look like illustrations from some children's fantasy novel--maybe a chapter from on of the later Oz books. And again, the painting surface is bright and sugary. But the text, instead of reinforcing the unreality of the image, is in stark contrast with it. There is a connection (mines) but the connection is ironic. When you look at this painting, you don't expect to see oppressed coal miners covered in coal dust, using blind horses to drag carts of coal--you expect to see elves or gnomes or smurfs, grinning as they march along with little pickaxes over their shoulders.

It seems that Båsen's main output is in the form of installations, which based on what photos I've seen look a lot like three-dimensional realizations of the kind of painted images in this show. I would have liked to have seen one of those, but that's ok--he's a hell of a painter and it was a pleasure looking at these pieces.