Report from Austin part 4: See Recovering Beauty at the Blanton Betore It's Too Late!

The title of this post says it all. But I'll elaborate a little. Sometimes, a group of artists get together in a certain time and place and something magic happens. Writer/artist Jorge Gumier Maier was put in charge of a small artists' space, the Rojas Gallery, at the Universidad de Buenos Aires. He did something quite unusual for this time in art history--he wrote a manifesto called "The Rojas Page: Avatars of Art." He outlined what he opposed--conceptual art (a "sterile, mistaken practice") and "stomachism" (art that punches you in the stomach). He was for an art of "pagan hedonism"; art that was "sacred" and which "eludes pretensions." (Funny that I should be writing about this in a blog called The Great God Pan is Dead.) Whether or not you agree with Maier's manifesto, the art in the show reflects it very well.

Personally, I have long been fascinated with the Argentina. It started back in the mid-80s when I picked up a volume of stories by Jorge Borges. This lead me into the rich world of Argentine literature. Visiting Buenos Aires in the late 80s, I discovered Argentina's amazing comics--artists like Quino, Carlos Nine, Max Cachimba/Juan Pablo Gonzalez, Alberto and Enrique Breccia, Francisco Solano Lopez, etc.) I tried to learn about B.A.'s art scene in those few weeks, but it was hard for an outsider with bad Spanish to know where to start. In any case, I arrived there too early to see the Rojas Gallery. And for the most part, these artists did not establish international reputations. This also fascinates me. That an artistic movement can basically come into existence and achieve a very high level without anyone really knowing about it. Gumier Maier writes that for the first few years, only one critic ever reviewed their shows. It speaks to the possibility of truly local scenes developing. In our wired world, this is a pleasing thought.

This exhibit is only up through May 22. If you happen to be in Austin in the next three days, make a point of seeing it. Here are some of the pieces you will see. 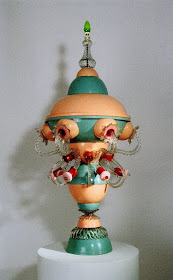 Omar Schiliro was a jewelry designer who started making these extravagant lamps when he was diagnosed with HIV. AIDS haunted the Rojas Gallery, which lends a disquieting edge to the otherwise sunny, joyful exhibit. Perhaps these artists embraced joy because their existence was so uncertain.

Elegant curves and arabesques typify much of the work in this show. Gumier Maier specifically is riffing off the more severe concrete art of earlier generations of Argentine and Uruguayan artists with these playful pieces. 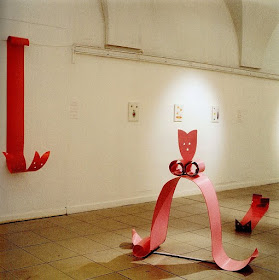 More curves, and the color pink, which was important for these artists, as seen in this piece by Cristina Schiavi. Gumier Maier, who was a gay-rights activist and writer as well as being an artist, wrote, "Pink is the color of daydreams. [...] pink has been all but prohibited from appearing on flags and emblems. Stranger to contingencies, silly and vulgar, it knows no modesty. [...] This is why, as a result, pink has become the faggot color par excellence." (from "The Tao of Art." 1997). 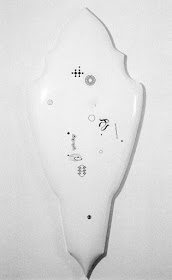 That said, one didn't need pastel colors to produce work that fit right in, as the pieces by Fabio Kacero demonstrate. 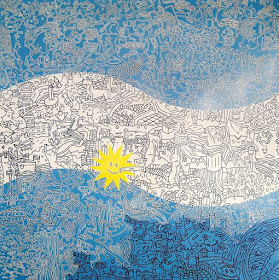 Beto de Volder's cartoony pornographic paintings are amongst the first you see when you walk into this exhibit. They kind of dare you to continue, but they are so wacky and unthreatening that they likewise invite you in. That said, I wanted to show this one, de Volder's version of an Argentine flag with a busy, sexy cartoon Buenos Aires superimposed on it. It seems to sum up the whole project.