On the eve of the tenth anniversary of the 9/11 tragedy, what amazes me most are the numbers of Americans that don't get it because they have no idea of the world's perception of their country, which is to say that they have no idea what acts their government perpetrates on others in their name. In other words, we suffer from a complete lack of geo-political self-awareness. I think the media is partially to blame for that. Judging from the title of Kim Chalmer's show, Matinee Monster, I think he may have drawn the same conclusion.

Imagine a movie theater hollowed out, and its inside transformed into a monster. That's what the show Matinee Monster at M Squared, which resides in the old Heights Movie Theater, is. The installation is laid out as a monster. It has eyes, a brain, entrails, ribs, bowels. It's more metaphorical than physical but it's there. Then imagine that the audience participates by stepping into the beast and getting consumed a la Jonah, but willingly. That's really what this show is all about: willingness, unwitting complicity.

In Kim Chalmer's artist statement, he acknowledges at least that "(his) work consists primarily of site responsive installations." In Matinee Monster, he uses the theater to create a monster in an almost Hobbesian sense, which was pointed out to me by Robert Boyd.  For Chalmers as for Hobbes, "Art goes yet further, imitating that rational and most excellent work of Nature, man. For by art is created that great LEVIATHAN called a COMMONWEALTH, or STATE (in Latin, CIVITAS), which is but an artificial man, though of greater stature and strength than the natural, for..." (Read the full quote in Leviathan.). And it is the current behaviour of this beast, the state and the media, that Hobbes dreaded and Chalmers bares witness to in this show. ﻿
﻿The viewer enters at the eyes, which is represented by a piece entitled Owl (J on the floor plan).

Steps past the Purgatory Pictures (H. on the floor plan) and passes Meat Mountain (F. on the floor plan), which, constitutes the brains of the beast and was created by Chalmer as a direct response to the twin towers falling. The main portion of the gallery serves as a mix of maw and entrails and consists of Navigator and Predator. The teeth, the gizzard, and the bowels are composed by the Tools and Toys, Blade series. At the back is a short film, Spincycle, which features rapid swapping of pictures of Chalmer's contorted face. It is Chalmer's response to the dis-orientation caused in him by 9/11.

To create this installation, Chalmers has incorporated many of his previous works. In some cases, he has reconfigured and re-titled them, and then re-contextualized them to serve the metaphor of the show, the monster.
Chalmers even stages the roll of the observers, with his Purgatory Pictures, toward the entrance. The line of 10 portraits bathed in red face the beast. They are representative of the American demographic: a mullah/muslim, a dog, a hispanic man, and several headless/bodyless forms that represent anyone. The public as portrayed by Chalmers is diverse, observant, and bathed in blood. They standby, eat their popcorn (so to speak...M2 has a hug sculpture of a kernel of popcorn suspended over the foyer), and passively bear witness to the media monster as it devours the viewers. Instead of media becoming fodder (intellectual and entertaining), we become fodder for it.
Chalmers practices an organic abstraction-ism in which materials are "...appropriate to content (Kentucky red clay, limestone wash, copy toner, acrylics, polyvinyl acetate, dyes, screen inks, powdered pigment, metallic powders on heavyweight paper and Braille pages)." That approach leads to some simple, beautiful surfaces such as Navigator's Kentucky red-clay patterns

and the Garden Elegies series (C. on the floor plan).
﻿
A few of the "teeth" from the Tools and Toys, Blade series also caught my eye with their combinations of decorative yet organic patterns and ominous shapes... 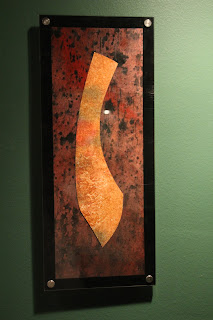 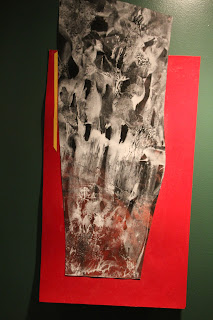 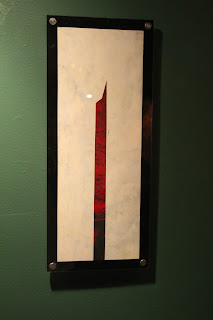 as well as the several from the Contagion, interior scars series (B. on the floor plan) 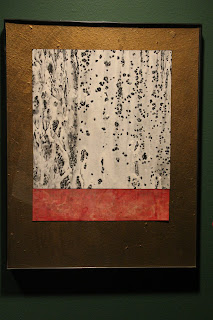 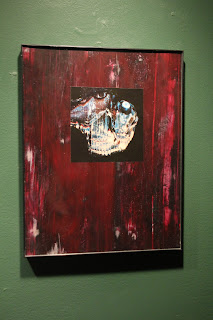 And I really enjoyed these site specific pieces, Spine Times, (G. on the floor plan).

Most of these works were not created for this show. As I mentioned, they've been contextually de-constructed and re-constructed to serve the theme of the installation. I might not be so receptive to all this if it wasn't the eve of the 10th anniversary of 9/11. But it is. And I am.