I have particular intention of making this a regular feature. Last time around, we discussed an image that a cartoonist, Tom Neely, and a painter, Matt Messinger, both copied from an old Fleisher Bros. Popeye cartoon. I would say that in both cases, the artists were paying homage to the classic animated cartoon. I think the same thing is going on here. I went to The Art Car Museum last weekend and saw this: 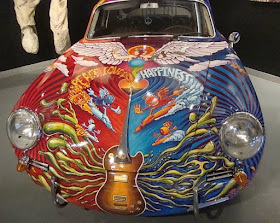 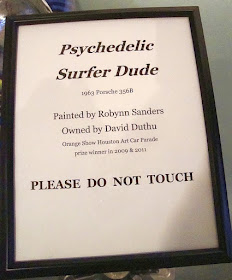 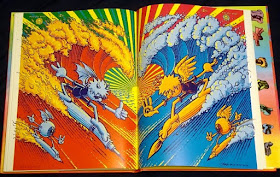 Victor Moscoso is a famous rock poster creator (he drew tons of the classic posters from the 1960s) and a long-time member of the Zap Comix gang. Robynn Sanders used this image by Victor Moscoso as the basis for the paint job she did on David Duthu's car. Personally, I don't think there is anything wrong with this--it is clearly a one-off job (not that many owners of 1963 Porsches are looking for custom surfer paint jobs) and an homage to the Zap cover. Indeed, for all we know, Duthu may have specifically commissioned Sanders to put that image on his car.

But the Art Car Museum should have acknowledged Victor Moscoso as the originator of the image.

Interestingly, this cover by Moscoso was itself an homage (but definitely not a swipe) to Rick Griffin, another Zap Comix artist who had died in a motorcycle crash in 1991. Moscoso basically combines Rick Griffin's drawing style with his own for this cover, and employs a lot of Griffin motifs. Griffin was a long-time surfer and well-known surf artist who is one of the key artists of the 60s counterculture (as is Moscoso).