A Tomb Grows at Rice University

You have probably heard about the big new James Turrell thing being built at Rice. Called Skyspace (he couldn't come up with a new title?), it will sit in front of the Shepherd School in the no-man's land between the Jones School and the Baker Institute. This is what it's supposed to look like. 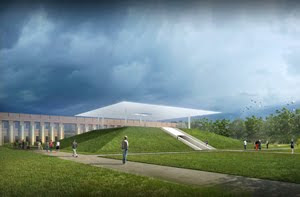 Here's another imaginary photograph of it: 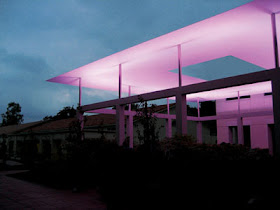 Ha! Fooled you. (Fooled me, too, initially. A reader with good eyes pointed out my error.) That is a photo of another James Turrell Skyspace, made in 2007 at Pomona College. He's going to keep making them until he gets it right, I guess (or until people stop paying him to). Ours is currently being built. Here it is last night (I was over at Rice for a class and for the latest Rice Gallery show). 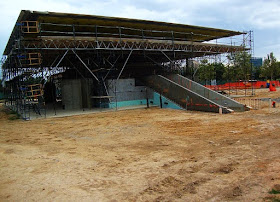 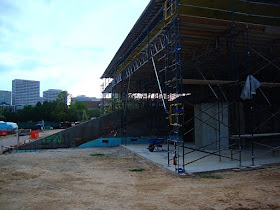 It looks like a tomb for a minor Sumerian tyrant. It really does have the look of an ancient burial mound. Instead, it will be apparently used as a musical performance space for Shepherd School students. I guess that's because concert spaces are something that they lack, unless you count this or this.

Skyspace is prominent on Rice Public Art, a new website (new to me, at least). This is a good thing to have because Rice's campus has a lot of interesting art on it, and this website provides a stroller with a guide. There's just one problem--it's incomplete. It lists nine pieces, including one in Fondren Library and one in the BioScience Research Collaborative that I don't know are accessible to the general public (I'll go check them out and report back). But it doesn't list Jim Love's Paul Bunyan Bouquet in the courtyard of Lovett College (is it gone?!) and most bizarrely, it doesn't list Willy's statue--the statue of William Marsh Rice right smack dab in the middle of the main quad.

It's like they are only interested in showing off their newest public art (although the Heizer piece has been there for a long time).

Since we have pieces by two of the big-name Earthworks guys at Rice, we should go for four-of-a-kind and get pieces by Nancy Holt and Walter de Maria.