Why I Recoil When People Assume that Comics = Superheroes

In this blog and in curatorial efforts I often try to introduce art comics into the neighborhood of contemporary art in general. Often the reaction of the art world is similar to that of white people when black folks moved into lily-white suburban neighborhoods in the 60s and 70s. A more common reaction, however, is indifference. Acceptance is the least common, but even within "acceptance" there are problems. Tokenism, for example, or a mistaking of art comics for the worst, most cliched aspects of "mainstream" comics (i.e., superheroes). To carry my neighborhood analogy way too far, it would be like the white guy assuring his new black neighbors that they are welcome because the white guy loves watermelon.

Superhero comics suck. They are hacked out by people with no taste, owned by corporations whose only aesthetic is to pander, they are sexist, I hate them. Now surely some people will say, well what about Jack Kirby/Plastic Man/Batman: Year One/Grant Morrison/Watchmen, etc. What about those comics you loved as a boy? All I can say in response is that any genre, no matter how limited and debased, can become a location for artistic expression. There are good Westerns, after all. But when I talk about superhero comics as a whole, I see a vast fetid swamp.

What set me off today? This: 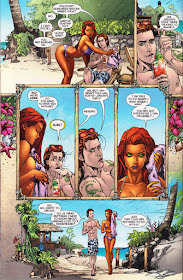 Kenneth Rocafort (art) and Scott Lobdell (script), page from Red Hood and the Outlaws #1, published by DC Comics, a division of Time-Warner

Here's what Noah Berlatsky had to say:


Criticizing DC is worthwhile because pointing out sexism is worthwhile and good writing is worthwhile and most of all because these morons deserve to be insulted. But hoping that Dan Didio is going to give a fuck about feminist complaints is like hoping that the coal industry will, after serious discussion, suddenly decide that solar energy is the future. You can teach an old dog new tricks, maybe, but you can’t turn an old dog into a penguin.

I’ve said this before more or less (most recently here) but maybe it bears repeating. Superhero comics are a tiny, niche market. Within that market, women are a tiny minority (10% at best, from the figures I’ve been able to find.) The audience for superhero comics is the small rump of 30-year-old plus men who have been reading superhero comics for 20-plus years and still want to read about the child-oriented characters of their youth — only, you know, in a kind of skeevy, adult way.

I have nothing to add except this--Marvel, too.