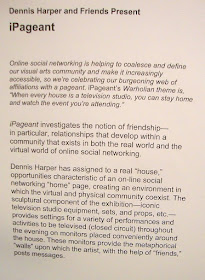 I wanted to lead off with this statement. Have I ever mentioned how much I dislike artists' statements? If you had read this prior to making a decision about whether to go to the Joanna and see this thing, you'd stay home and watch reruns. The problem with artists' statements is that the make even really exciting art sound boring. Fortunately, I didn't read this statement until I got to the Joanna, so I was already committed.

So let me try to give you a flavor of the show--Dennis Harper invited his friends to come together for a one-night only evening of performance on October 22 at The Joanna. The structure was like an evening of broadcast TV, where you might have an Entertainment Tonight-like program followed by some comedy then by a game show, etc. Now The Joanna is a pretty bad place to see performance--it's a house, so the largest room is the relatively small living room. To get around this problem, Harper installed a closed circuit TV system. I think there were four screens in all--two in interior rooms, one on a walled-in porch, and one outside in the back yard. This way, everyone could see the performances. But Harper went an extra step--he created a fake TV studio out of paper--giant paper cameras, lights, microphones, etc. So while he had, in effect, a real TV studio (with tiny modern cameras feeding into Harper's computer, from which he directed the scene and controlled what was seen on the closed circuit monitors), on top of that he had layered a fake 1960s era TV studio. 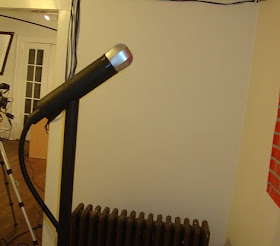 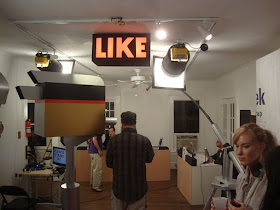 That's sculptor Woody Golden above operating one of the real cameras as various Houston art figures take their places for a game of What's My Line. The camera to the left is made of paper. 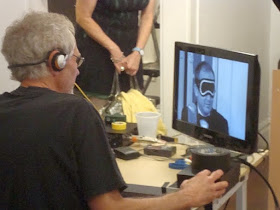 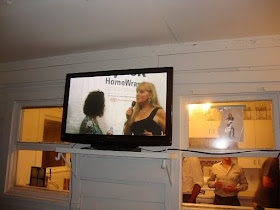 Tina McPherson, whose day job supervisor of the William R. Jenkins Art and Architecture Library at U.H., is also a local arts scenester. (Lots of local scenesters have day jobs that are tangentially related, at best, to their position within the local art scene.) She conducted interviews of arriving guests (pretty much anyone who came through) similar to those red-carpet interviews one might see on awards shows or celebrity-oriented shows. I've always thought it was weird how the backdrop to these interviews would be wallpaper printed with copies of corporate and/or product logos. iPageant parodied this tendency by putting up Tyvek, the super-strong water-proof paper that home builders use to cover the wooden framing of modern houses. Tyvek has its logo printed in a regular pattern, making Tyvek paper perfect for a red-carpet backdrop. McPherson treated everyone who came in as if they were a celebrity, whose answers to her repetitious questions were actually worth hearing. This went out live on the closed-circuit feed. Lots of people tried to fluster McPherson by giving outrageous answers to her questions, but she never broke character as far as I saw.

Then in the room to the left of the entryway, Herbert Melichar was taking headshot photos of everyone who walked in. He had lights set up and a black background. The photos were dramatic. He put them up in a gallery on his Facebook page and his Flickr page (whichever you prefer). 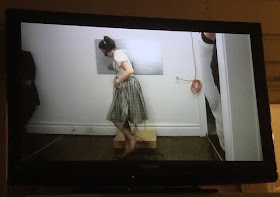 Next up was Nancy Douthey. As I mentioned in an earlier post, this performance was very much based on acting. Douthey was an old-fashioned telephone operator (a job rendered obsolete by technology). You've seen such operators in movies and on TV--they would be sitting before a bank of lights and sockets, and their job was to connect specific callers with specific receivers. Douthey uses practice to engage in a series of one sided conversations. It's not totally clear whether each conversation was meant to be a different person, or if it was the same person, whose personality changed depending on with whom she was speaking. The latter scenario was how I interpreted it, and I saw it as being about how our identity depends so much on other people--and other circumstances. We are not the same person when we are talking to our mother as opposed to when we are talking to our lover.

Then it was time for the main event. both the fake television studio and the real one were set up in the Joanna's living room. A set for a game show was there with seats for four panelists, one host, and one contestant. This was a recreation of What's My Line, which was a weekly prime time game show from 1950 to 1967, and a daily syndicated show from 1967 to 1975. The idea behind the show is that the panelists, who wore blindfolds, would have to guess who the guest was based on a series of yes or no questions. If they failed to guess within a certain number of questions, the guest won (I'm assuming the guest, who was a celebrity, was playing on behalf of someone). 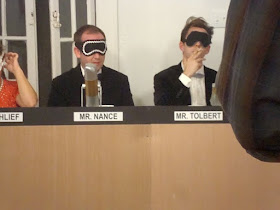 Two of the What's My Line panelists, Dennis Nance and Shane Tolbert

The host was played by Mat Wolf. The guests were Jenny Schlief, Dennis Nance, Shane Tolbert and Lane Hagood. The look was "natty."

It started off a little awkwardly, but as they got into the act, the players got better and better.

The first mystery guest was Blaffer director Claudia Schmuckli. It didn't take long for the panelists to guess who she was. The next contestant was a twist--two people, Cody Ledvina and Brian Rod, the guys behind The Joanna. The panelists never guessed who they were because of their confusing, contradictory answers.

Between each act, the closed circuit TV camera showed this sign. 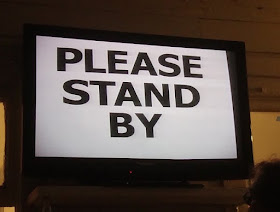 I left after the "What's My Line" act (which I kind of wish could have gone on longer--how often do you say that about performance art, eh?), and because of this I missed some other things that apparently happened later (to go by the photographic evidence here).

What I didn't quite understand was what all this had to do with social networking. There were a few obvious references (the "like" sign in the place of an "applause" sign), but it seemed to have more to do with television and our shared history of television than anything. But on a little bit of signage showing all of Harper's collaborators, we do get an idea of the interconnectedness of one part of Houston's art scene. 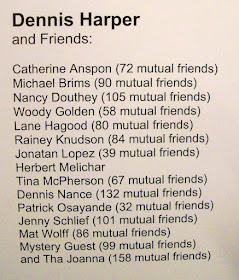 I thought it was fantastic fun, and the format seems replicable. If Harper wanted to host additional performance nights, the fake TV studio with closed circuit monitors would be a good way to structure it. I'd go see them.