The ecology of art means that sometimes galleries close and sometimes now ones open. I was driving by the old Apama Mackey and saw a "for sale" sign on its cool container-car exterior. Sad but it happens. It's a tough business, making a gallery go. More hopeful are the appearance of two new galleries on the scene.  Cardoza is located where The Temporary Space used to be. What's exciting there is that Mark Flood has a show coming up on October 14. Ironically, Christopher Cascio has a show opening there in November--he showed there when it was the Temporary Space.

In the meantime, Front Gallery had its inaugural exhibit on Saturday, October 8. The Front Gallery is so named, I'm guessing, because it is the front room of artist Sharon Engelstein's house. It's my experience that galleries in houses are kind of half-assed affairs. If people live in the house, it feels like you are walking into someone's private living space. You find yourself stumbling over furniture. If the house has been converted to a gallery, the rooms often feel like they are the wrong dimensions--ceilings too low, the hallways between "gallery" rooms are awkward, there are awkward windows, etc. This awkwardness is in part due to the fact that I have a certain expectation of a gallery--big room with a high ceiling, painted white.

And there is no doubt when you walk into Front Gallery that it is quite literally a front parlour. But it worked as a gallery for this show because the art was perfectly in scale with the room and because it was clearly separate from the rest of the house. 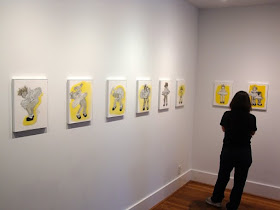 So not only does Front Gallery look great, but it started off its life with a completely excellent show. Kim Dingle is a Los Angeles artist who is best known for her drawings and paintings of hyper-active girls--Priss, the Wild Girls, Fatty and Fudge. I believe the girls portrayed here are Fatty and Fudge. 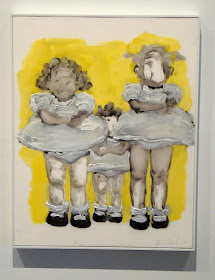 She has said all of the girls are based on herself, but also specifically references Wadow Dingle, her neice, who was born with brain damage that caused violent outbursts during her childhood. That's what we see in these drawings--explosions of violent energy. 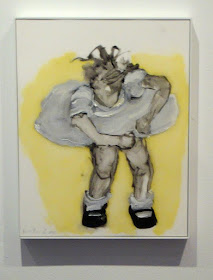 The medium is interesting. Anyone who has painted with oil paint knows how slippery it is (unlike acrylic paint, which is sticky). And vellum, a transparent, ultrasmooth drawing surface, is also quite slippery (unlike, say, canvas). Using oil on vellum allows an artist to paint in two ways simultaneously--to put paint down onto the vellum and to pull it off. In short, erasing paint is potentially as expressive as adding paint. That's what we see in these pieces. 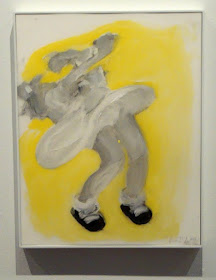 The double-slipperiness of the medium encourages a sketchy, expressionist approach, which suits the subject. There's just enough there to show you what you need to see. In the vigor, violence and economy, these paintings remind me the comic strips of the 1920s and 30s--not the pretty, highly rendered ones like Price Valiant or Little Nemo, but the more streetwise, working class comics like Popeye, The Bungle Family, and Krazy Kat. 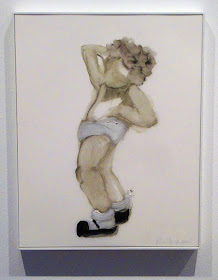 The west wall of Front Gallery is where the fireplace is. So for this show, the works on that wall were distinct from the Dingle pieces on the north and east walls. Over the mantle was this drawing: 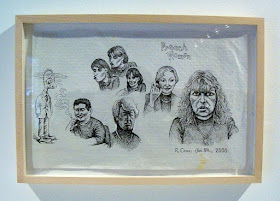 Robert Crumb is another artist whose work recalls those early 20th century newspaper comic strip artists. But as he has gotten older, his work has become more detailed and baroque. One can see that in this sketch. These placemat sketches were done in restaurants in the small town in France where he lives. He is, obviously, a compulsive doodler. (So compulsive that three books of these sketches have been published.) It's astonishing to look at this or to read the books and realize that this is what he does while sitting around waiting for his pizza to be ready. 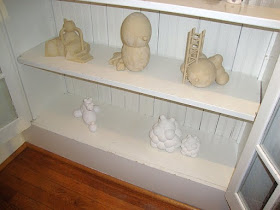 Finally, on the small shelves beside the fireplace, Engelstein placed what appear to be maquettes for some of her own pieces.It's interesting to see them so small and devoid of color.

In short, a successful first show for Front Gallery.