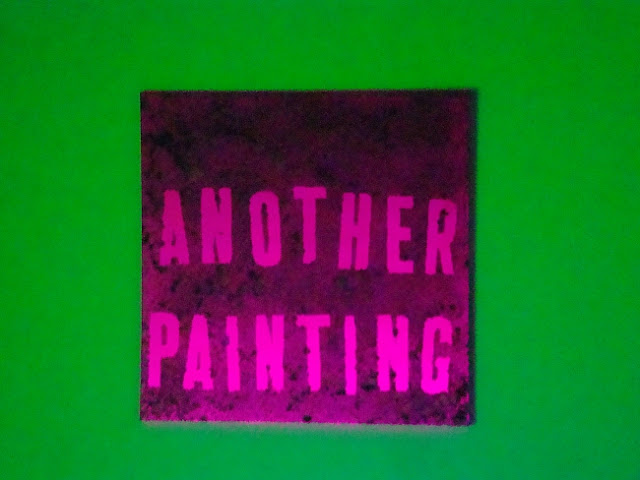 Mark Flood dares you approach his art the same way you approach other art. I have to refrain from being sarcastic and nasty, and I have to treat his lifetime of games as an artistic strategy rather than a big "fuck you" to art and everything else. And that's not easy.

Just constructing a biography of Flood is a challenge. Any of the following statements may or may not be true. Mark Flood was born in Houston in 1957. He went to Rice University. I suspect "Mark Flood" is his real name because there is a Mark Flood in the Rice alumni directory as a member of the class of 1980. The directory says he has "no degree." In 1980, he formed the quasi-industrial punk band Culturcide. At this time, he went by the name Perry Webb. Their first single was called "Consider Museums as Concentration Camps." That kind of sets the tone for Flood's entire career. You can buy their albums on iTunes--except the notorious Tacky Souvenirs of Pre-Revolutionary America--and album that had Flood singing over various pop songs like "Billie Jean" and "We Are the World" with nasty new lyrics. Instead of sampling bits of the songs, they just used the whole song, layering vocals and industrial sounds on top.

In the meantime, he started showing his art, initially around Houston (including several times at Diverse Works in the 80s) and by 1991 in New York. By the 2000s, most of his exhibits were in commercial galleries outside Houston. In 2006, "Clark Flood" started writing a column for Glasstire. His scabrous attacks on every art institution in Houston (including Diverse Works) and Houston's art scene displayed a real bitterness toward his hometown. As far as I can tell, his column made some sensitive, humorless, thin-skinned people pretty angry. I thought they were funny. I see them as an extended flipping of the bird to Houston, which was nothing new for Flood--check out "Houston Lawman" by Culturcide.

This is not to say he loves the rest of the art world. Many of his works have been highly critical of that world, including "Landscape with Parasite" from this show. 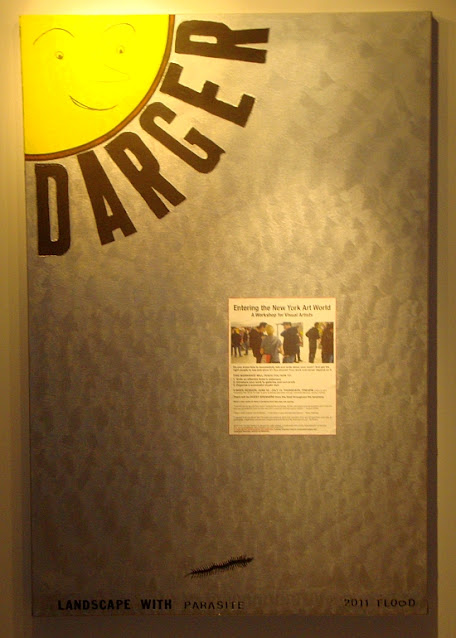 Here is a detail (excuse the fuzziness): 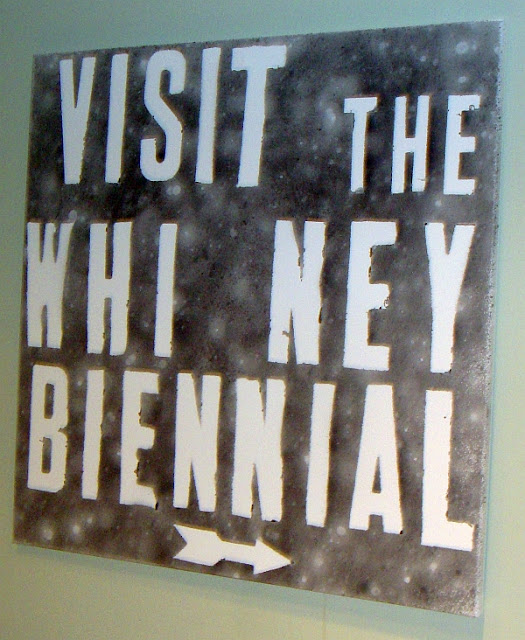 This success is startling, especially given that lots of his paintings are just stenciled words, done as quickly and easily as possible. Sometimes the phrases are clever or ironic, but a lot of the time they are just banal or stupid. They look like the least amount of effort possible was put into them. They could be read as subverting the idea of what can be displayed as art, except that got subverted a long time ago. In any case, commercial galleries wouldn't continue showing Flood's work if there wasn't a market for at least some of it. 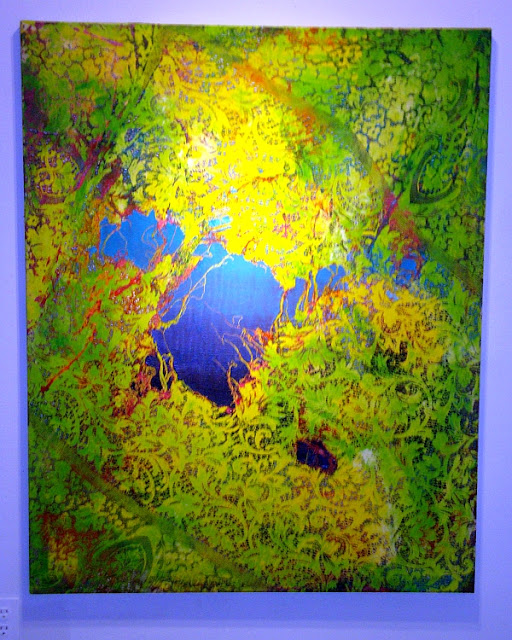 This explains it. These paintings which use lace as part of their composition, are gorgeous. It seems like he paints a smooth flat gradient on the canvas, then puts a lacy stencil of some kind. The effect is psychedelic and hypnotizing. And I suspect that they are popular. Between 2001 and 2006, he did eight exhibits called "Lace Paintings." 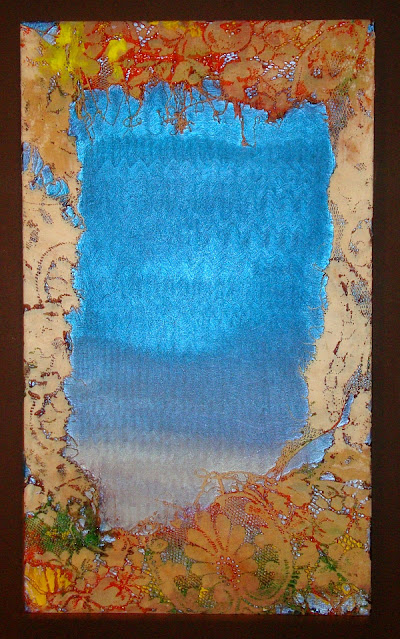 But no one gets away with making an abstract painting that is what it is and nothing else. Or to put it another way, I can't look at torn lace without thinking that it looks kind of rapey. There is a feminine association with lace and a masculine association with ripping stuff up. The psychedelic color schemes recall old rock posters from the 1960s--particularly those by Victor Moscoso. The combination of torn lace and 60s psychedelia could be read as an expression of betrayal--that the idealistic hopeful aspects of the 60s were a big fib and if you believed that peace and love bullshit, you were just setting yourself up to be raped by the powers that be. This brings us back around to Flood's roots. Think about what his contemporaries were doing while Culturecide was getting started--you had Hüsker Dü deconstructing "Eight Miles High" and Raymond Pettibon making movies like Weathermen 69 and The Book of Manson. As beautiful as the lace paintings are (and as far as I am concerned, that is the only justification needed for their existence), they seem like a dead end, rehashing a stance that seemed old already by the 90s. 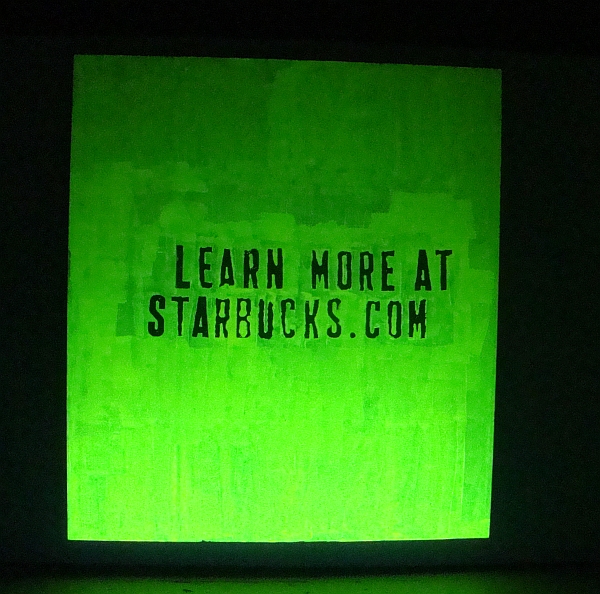 So if you have read this far, it sounds like I'm pretty down on Mark Flood's art. The thing is, my gut reaction says just the opposite. I loved seeing this show. I was totally energized by it. In a way, it defies analysis. If you were an artist and you wanted to say "fuck you" to critics (and Flood wants to say "fuck you" to everyone), this is the best way to do it--make them love the work despite themselves. So just ignore everything I wrote above and see it. 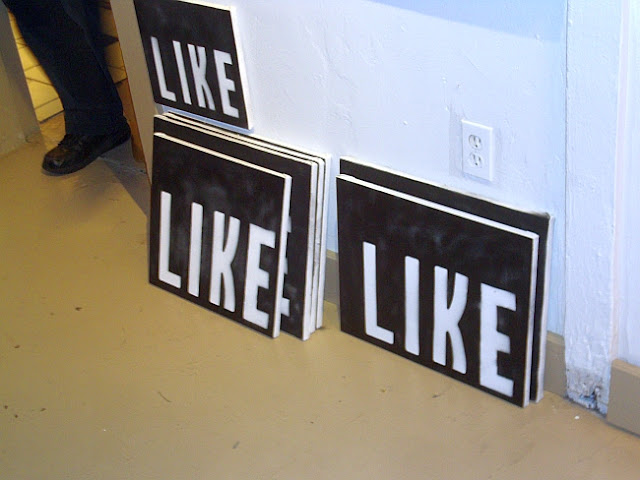