The Great Northern Brotherhood of Canadian Cartoonists by Seth. Seth has been working on Clyde Fans forever. It seems like he got into a need to create something artistically perfect, and perhaps this is a bit overwhelming. So while he has been working on Clyde Fans, he has published three books, each of which involved techniques for curing writers block. The first, Wimbledon Green: The Greatest Comic Book Collector in the World, was drawn in his sketchbook--which freed him from having to do "perfect" drawings. It was also done in little self-contained episodes, which freed him from having to have a sense of absolute unity for the work. (Jennifer Egan's A Visit from the Goon Squad squad operates similarly.) George Sprott: 1894-1975 returned to a highly polished drawing but kept the episodic approach--each page was kind of a separate story relating to the life of George Sprott. The Great Northern Brotherhood of Canadian Cartoonists was also drawn in a sketchbook, but it has a continuous story flow. It imagines that there is a professional society of Canadian Cartoonists that was at one time extremely wealthy due to the huge popularity of comics in Canada throughout the 20th century. Some of the ideas are similar to Dylan Horrocks' graphic novel Hicksville--including that of a great library of all the important works of comics. But at the end of the book, the narrator--Seth himself--explains that the GNBCC was never as wealthy and successful as he has portrayed it here (obviously). It's an extended, lovely fantasia on the idea of comics and comic strips being an art form as respected as visual art or literature--a fantasy of many cartoonists, to be sure.

The Armed Garden and Other Stories by David B. David B. is one of the most important cartoonists in France. A member of L'Association, his most important work is Epileptic, an autobiographical work about growing up with a severely epileptic brother, and his parents' fruitless search for ways to control the condition through both conventional medicine and alternative therapies. But I will confess that I like the stories in The Armed Garden more. These are stories about heretics. Heresy is a subject of particular interest for certain storytellers--for example, Jorge Luis Borges. And interestingly, Borges wrote two stories involving Hakim al-Muquanna, who is the subject of the story of "The Veiled Prophet", one of the three stories here, which describes the origin of al-Muquanna as a prophet and his battles with the Caliph. "The Armed Garden" deals with clashes between two sets of heretics in 15th century Czechoslovakia--on one side, the free-love practicing nudists led by Rohan the Blacksmith, and on the other the Taborites, lead by the bloodthirsty general Jan Žižka. The first panel of this story starts with the words "1415 was not a very good year for Christianity." In such times, heresies are born. These bizarre fable-like tales may seem far from us, but they show want can happen when societies are stressed.

The Man Who Grew His Beard by Olivier Schrauwen. Most of these stories were published in the anthology Mome. I admit that when I read them there, I kind of skimmed them. They seemed like trifles. But in this book collection, the effect is much stronger. The stories are funny, ironic and absurd. In that, he reminds me of his fellow Belgian cartoonists, Kamagurka and Herr Seele. But he also reminds one of the avant garde Belgian cartoonists of Freon (later Fremok). These are more "art comics," where the visual aspect is paramount. 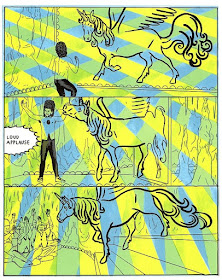 This is not to say the narratives are unimportant, mere hangers onto which to hang the art. They are amusing, weird and compelling--the visual aspect makes them all the more so. I think this book was overlooked when it came out--but it deserves to be read.

Love & Rockets #04: Love and Rockets: New Stories by Gilbert Hernandez and Jaime Hernandez. This book, on the other hand, has gotten tons of recognition. The Hernandez brothers have been producing Love & Rockets comics since 1981, and in 2008 started releasing them as book collections. I have to admit I don't get Gilbert's work anymore--he's gone so deep into his obsessions (old genre movies, ginormous boobs) that it's hard for me to see anything else. Jaime's stories are the ones that people really responded to in this issue. For the past few years, he has been concentrating on his character Maggie, and filling in her life. The previous volume contained a particularly powerful story about her childhood and her brother Calvin. This time around, the Maggie stories are a little more sentimental. (SPOILER ALERT) She finally ends up with Ray Dominguez, a character that has been a part of Maggie's life for decades. Jaime is too oblique a storyteller for this to be a cliche. But still, I think one reason people like it so much is because they have wanted to see these two characters settle down and be happy for so long.

Flesh and Spontaneous Combustion by Skip Williamson. These are self-published Kindle books by the long-time underground cartoonist, Skip Williamson, and they could have used a good copy-editor. But between the whiff of vanity publication and the amateurish editing, they're actually great! Skip Williamson is a funny writer--he writes as if he's telling you a longish shaggy-dog story in a bar, and his use of language (as anyone who has read his comics knows) is interestingly florid. I wish it had been organized a little better, and hadn't been so episodic--there are spaces between the anecdotes he shares that I would like to have heard more about. At the very least, I'd like to see the trajectories of his career, his various relations, his life in Chicago (and why he moved to Atlanta), etc. As it is, we get glimpses of these things. The two books are kind of a  "greatest hits" collection. Readers of Pan will be especially interested in Williamson's adventures in Atlanta's art scene as related in Spontaneous Combustion.

Flesh mostly deals with underground cartoonist Skip Williamson's time as an art director for various naughty magazines, including a long stint as an art director for Playboy. Like Spontaneous Combustion, it's highly readable if scattered. Williamson self-published both books as short Kindle books, but what would have been better would have been a single book in which the essays were sliced up and reassembled into a single, full-length auto-biographical narrative. In short, these books would have benefited from having an editor. As it is, they are quite entertaining if sometimes a little confusing as far as chronology goes.