The Texas Contemporary Art Fair had the disadvantage of being second, and in consequence seemed to try much harder. The Houston Fine Art Fair was big and varied, and its size allowed it to contain multitudes. It hit higher highs and lower lows. It had pieces of art that were astonishing to behold--great early to mid-20th century Latin American art, for example. It also had booths that seemed shamefully kitschy. TCAF was more carefully curated. The work was tasteful and very contemporary. It leaned towards eye-candy--as you would expect at a commercial enterprise like this. But its idea of eye-candy was right up to the minute.

For instance, this piece by Leo Villareal at Gering & López. It was cool and a bold move for the gallery. It was the only piece they showed--you walked into their booth, and there were a series of couches designed for people to look up at the ceiling. (One can imagine spending a few hours of quality time on one of these couches with this piece and a bag of 'shrooms.) There might be a theoretical explanation for this work--maybe Villareal's work has been closely examined and pondered over by critics. But there's no denying that this light show is eye-candy. The folks at Jack Fischer Gallery knew they had eye-candy with the work of Chris Crites, so the brought a lot of it. The limited palette of intense acrylic colors (5 for each work) gives these images a poster-like quality--one might be reminded, for example, of the rock posters of Frank Kozik. And using old mugshots has an attractive outlaw vibe. I don't want to accuse Crites of pandering to a certain kind of viewer (me, for example), but he pushes the right buttons and the work jumps off the wall. 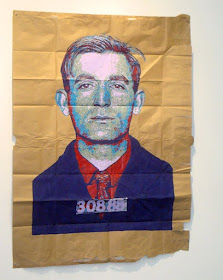 Some galleries were determined to grab your attention with work that superficially felt edgy and outlawish. If Crites' rogues gallery didn't grab you by the nuts, then how about an American flag made out of safety razors? 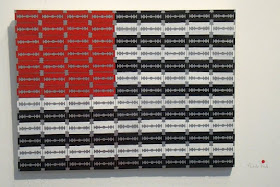 Michele Pred's work (at Nancy Hoffman Gallery) grabs you by consisting of important, instantly recognizable icons (like the American flag) made out of literally contraband material. It tempts you with its danger and its cleverness, but once wonders if it could possibly stand the test of time. Or, to put it in terms of an art fair, would a collector experience buyer's remorse after a year or two of this on his wall? 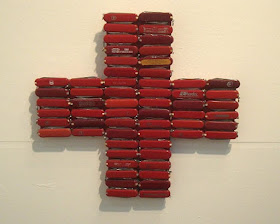 That's my question about a lot of the art here. And I'm even talking about art I liked (like all of the pieces above). The work strikes me as entirely enjoyable when encountering them in the environment of an art fair. But in a museum, they might seem a bit trite. In someone's home, they might seem gimmicky. Context matters a lot. 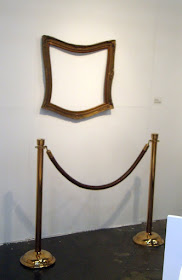 I'm a small scale collector--at this show, my sole purchase was a $5 painting from the Rice Gallery--but I try to put myself on the mind of collectors with more spare cash to spend. I can see someone looking at this piece by SuttonBeresCuller and thinking, "oh, clever!" And it is clever. But I also imagine that buyer's remorse would set in seconds after the ink on the check dried. This is a bit unfair to the Seattle-based artists, who are a three person team of prankster/performers--they remind me a bit of The Art Guys. But this piece is like a performance--it only makes sense for a limited period of time. The idea can't really sustain an extended existence. But being made of bronze ensures a fairly long existence (potentially). The gallery, Lawrimore Projects, even emphasizes that quality in their wordy information card. It tells us that "The work is suitable for outdoor installation." 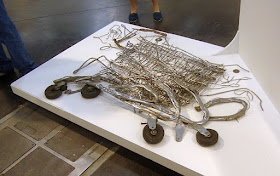 Lawrimore Projects doesn't leave anything to chance--the informational card tells us that one of Cris Bruch's pieces has just been acquired by the Yale Art Museum. That conveys his importance as an artist. Still, you have to admire them for including this piece. It is definitely not eye-candy. 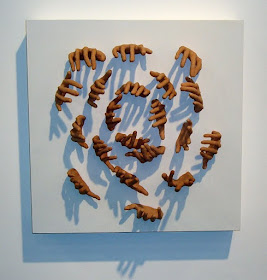 Carolina Silva's piece Here is unusually creepy. Collector--if you buy this piece, I recommend that you not hang it in the children's bedroom.

Lawrimore Projects tended to show artists either from Seattle or who otherwise had a connection with the city. I like that. I think one benefit of an art fair is the possibility of seeing work from different locations--not just New York. The Houston Fine Art Fair was strong in Latin American art. Of the 55 exhibitors in the catalog for the Texas Contemporary Art Fair, 17 were from New York, 11 were from Houston, five were from Los Angeles,  five were from San Francisco, four were from San Antonio, two from Seattle, and one each from Marfa, Milton Village, MA, Austin, Buenos Aires, Miami, Annapolis, MD, Bloomington, IL, St. Petersberg, FL, Tokyo and Santa Fe. The relative lack of Miami galleries and Latin American galleries gives this show less of an international feel than last month's fair. But it's still a nice mixture. 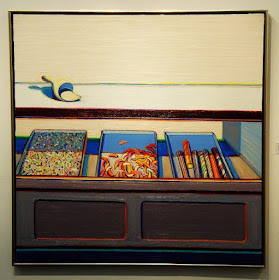 So we get a great west coast artist,Wayne Thiebaud, exhibiting pieces at San Francisco's Paul Thiebaud Gallery. The names are not a coincidence--Paul was Wayne's son (Paul Thiebaud died earlier this year). I've always loved Wayne Thiebaud's painting and this one is not bad at all. It is all the more amazing for having been painted in Thiebaud's 90th year. However, it was unusual to see work from an artist of this generation. One exhibitor had two Rauschenberg prints, but everything else that I saw seemed to be quite current. 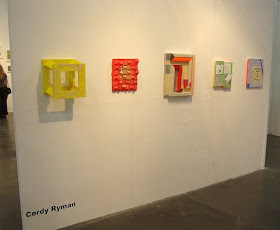 And speaking of nepotism, what about Cordy Ryman, son of famous minimalist painter Robert Ryman? I like his work OK, but I have to wonder if his path wasn't smoothed considerably because of who his father is. DCKT Contemporary seems to like artists with famous artist parents--it also represents Sophie Crumb, Robert Crumb's daughter. 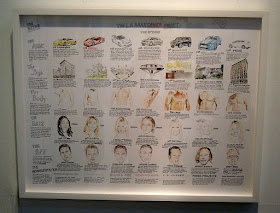 William Powhida is not a Los Angeles artist, but Charlie James Gallery made certain that the one piece by him that they showed was Los Angeles-centric. Powhida is an artist I like a lot, but it's not obvious why he is a gallery artist. In an earlier time, he would have been an artist for Spy Magazine or The National Lampoon. Perhaps it is the lack of a clever satirical magazine as a venue that drives him into the art world.

This gallery had a whole bunch of cartoonish or otherwise silly art. For instance, this piece by Nery Gabriel Lemus. 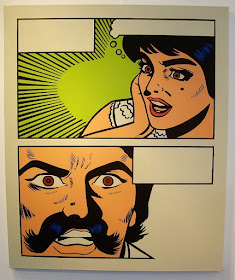 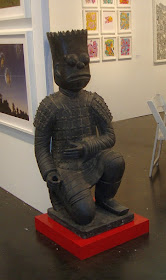 Also on the silly side of things (but funny) was this piece. 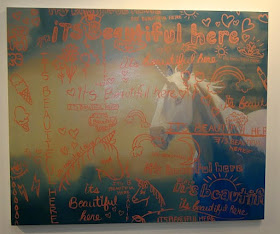 RH Gallery from New York had several pieces by Panni Malekzadeh, but this one was the best. It made me laugh.