Messinger and Rayroud Slam Slides at the CAMH

For me, Matt Messinger creates lyrical works without a coherent narrative. According to him, it just evolves: a silk-screen here, pencil marks from his son there. A splash of color or a repeated symbol. Viscerally, his work hits me like Robert Rauschenberg. Maybe Messinger is deliberately choosing to be an aesthetic descendant of Rauschenberg. Maybe not. 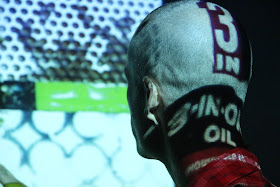 Catherine Winkler Rayroud presented in the second part of the hour. Her work is a combination of delicacy and brashness. The delicacy lies in her choice of medium, cut paper. Her brashness lies the narrative of her pieces as demonstrated in the following two works.

In Women's Liberation? What Liberation?, Rayroud questions the success of the women's liberation movement, framing it in a feminine icon. Is having to do everything liberation or further enslavement?

In Houston Time Clash, she conflates progress and the pastoral. Is the brave new Houston really better?