My Life as a Doll. Feminism for the Mall

Like all works of art, "My Life as a Doll" by Tara Conley and Tria Wood has a specific audience and for two reasons, it's not me. One is because my insurance company won't cover the medical cost that I would incur to become a member of their primary audience. Plus, I can't afford the surgery and a closet full of shoes by Manolo Blahnik and Jimmy Choo. (Why would anyone go under the knife to wear sensible shoes and support hose?) Two is because I know that third-wave feminism is not a surfing fade and am vaguely aware of issues of gender politics.

In other words, women (or men) who embody the principles of contemporary feminism and are well-versed in gender studies and gender politics, are not the audience of this work. I know this because I asked a lot of women at the show after I walked through it. The responses fell into two categories: those that thought the message of the show was "obvious," and those who didn't and said things like "I think that every day" and "That's my life."

The conceit of the installation is that it's a life-size doll house. To fully experience it, you sit on the Booty Bench, and booty up.


Once bootied, you walk through the house. The door mat says "Telling the truth in an imaginary place." The house's basic layout is dining room, garden, party room, gargantuan closet, bedroom but oddly enough no kitchen. The rooms are furnished with emblematic furniture or props, which highlight Conley's extraordinary talent as a sculpture and her aesthetic. The story of dolls life is literally written on the walls of this house. Using dialog balloons, Woods has written out Doll's life in iambic pentameter. Text also appears as part of the wall paper on some of the rooms, as labels on clothes in the closet, and as captions on the mirrors. Phrases like "I remember the silent I love yous," "the way we never were," and "perfect is expensive" are some of the truths you encounter in this imaginary place.

The color palette of the entire is house is Barbie-brilliant as if the fictional interior designer of this house is attempting to combat domestic dysfunction with cheerful colors. So if you're depressed or hung over or both, I recommend wearing your rehab glasses.

Even nature is outdone as the garden is full of Conley's vibrant raw cotton and metal stemmed flowers.

The closet is chock full of clothing labeled for each occasion such as "decide and don't look back panties" and "it's nice to be seen slacks"...more simple truths brutally, plainly stated.

The tentacled dress is the center-piece of the closet. On a runway in Paris or New York, I might dismiss it as fanciful fashion. In Doll's house, I can't help but see only attachment issues.

The "cock & tail" party room comes replete with silhouettes of both and a sound track.

The bedroom contains a "princess bed" with a cage, a sword, a pair of hand cuffs in which the chain spells out "I need you to be with me" and the border is a stencil of the same handcuffs. This isn't a kinky sex playroom. It's a chamber for captive sex via metal clasps and co-dependence. 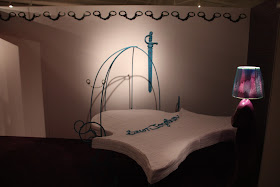 My favorite part is the most meretricious, the mirrors. They have the silver egoistic flash inherent in mirrors but are subtlety undermined by sometimes comic, sometimes cutting text.

I heard a few criticisms that can be summed up in one interjection, "Duh!" And that's true if this installation is addressing cutting-edge feminism of 2011. Given the fact that it debuted at DiverseWorks, I understand the expectation that it would, but it doesn't. However, I do think it contributes to the conversation. Two essays about the show, one by Susie Kalil and one by curator Diane Barber, address how it does much better than I ever could. Craft and context accumulate to convey decades-old feminist conventions, that if you have spent any time in pop-culture, (I think) obviously and forcefully bear repeating...often and in garish colors with a biting sense of humor. And that's exactly what "My Life as a Doll" does.

Conley and Woods plan to take this installation on the road. Personally, I hope they take it to a mall near me such as the Galleria or First Colony. In that context, I think it would be revelatory.