Trimpin at the Cinema Arts Festival

I saw, the Trimpin documentary, Trimpin: The Sound of Invention, last night. I wish the Cinema Arts Festival was running some movies twice, because I'd like to recommend this film in such a way that you could go and see it at the festival. But it is available on DVD. Trimpin spoke afterwards--as you can see, he is a very animated speaker!

It frames Trimpin's story around the conceptualization of, rehearsals for, and performance of a collaboration with the Kronos Quartet. But it looks at his history as an artist and various projects he has undertaking over the years. Trimpin is a highly eccentric artist--he doesn't really come out of any particular movement. The closest to his art would be Jean Tinguely. Trimpin speaks of moving to the U.S because they had great junk here--literal junk. His art is made from scrap that he gets from junk yards and surplus dealers. I was reminded of the great Calvin Tompkins article in The New Yorker about Jean Tinguely--he was in New York to build his Homage to New York in 1962, and Tompkins accompanied him to a huge junk yard in New Jersey. Tinguely was amazed and in love--he stated he wished he could live in the junk yard. I got that vibe from Trimpin, too.

Trimpin lives in Seattle and was there in the early 90s, when I lived there. He was pretty well-known in artistic circles there. I remember a show of sound art at COCA, where one of his pieces was the centerpiece of the show. It was the Kloppen, a computer-controlled room-sized percussion device. The percussion, a wooden clacking, was made by tiny mallets inside wooden shoes. The shoes hung from the ceiling, slightly below eye-level (I'm 6'1"), so I could see the mechanism--a little electric motor connected to a small mallet inside the shoe. A signal from the wire that the shoe hung from would cause the mallet to strike in inside top of the shoe--clack! This signal was controlled by a computer. This is typical of his work--the level of technology employed ranges from medieval to post-industrial, often in the same piece. It's the ultimate tinkerer's art. (I wish I could tell you exactly when I saw this, but the lame COCA website only has archives back to 2007. It was in the early 90s, though) It was an awesome immersive sound experience. 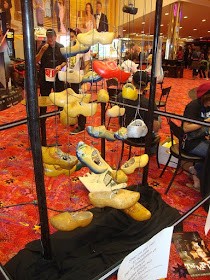 At Edwards theater, they set up a small version of Kloppen--the Mini-Kloppen. Too bad they couldn't have found a gallery in town to host the full-sized Kloppen for a month. It's a highly entertaining piece of work to experience live, which is pretty much the only was you can ever experience a Trimpin--he doesn't make sound recordings of his sound pieces.

Afterwards, there was a Q&A with Trimpin and filmmaker Peter Esmonde. Esmonde said something that stuck with me about why one does a documentary like this. When a film crew steps into Trimpin's studio, it's usually a local news crew doing a three minute bit on a "local kook." Consequently, Trimpin doesn't permit people to film his studio, and Esmonde had to work hard to convince Trimpin of his good intentions. The phrase "local kook" rang true. There is a gulf between the public and an artist like Trimpin--or, these days, almost any artist. So in a locality--Seattle, Houston, wherever--people who should be lionized as local heroes get little recognition locally. At best, they are identified as "local kooks."