Your Moment of Texas Art History 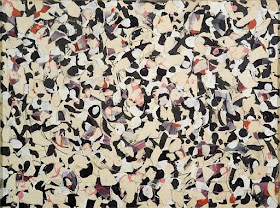 Joseph Glasco (1925-1996) was an abstract expressionist painter who grew up in Texas, lived in New York, and later moved back to Galveston, where he had a studio. He had the single most impressive work in Fresh Paint. And Donald Baechler was briefly his studio assistant.


In February 1981 [...] I found a temporary job in Joe Glasco's studio, where I worked for a month while his regular assistant was on sabbatical.

My job had two main parts: to roll joints for Joe while he painted on scraps of canvas, and to glue his paintings together with gallons of Elmer's glue. [No. 1: First Works by 362 Artists]