The Bitch is Back

Do you remember Bernie Taupin? He wrote these deathless lyrics:

To be fair, he also wrote these lyrics (which are inarguably awesome):

The top is from "Candle in the Wind," and the bottom is from "Saturday Night's Alright (for Fighting)." For better and worse, Taupin helped shape the sonic landscape of the 70s. But he's not just the lyricist for Elton John. Turns out that like many a celebrity, Bernie dabbles in painting. And soon you will be able to see his paintings here in Houston! 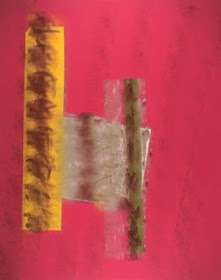 Off the Wall Gallery: (5015 Westheimer), Houston's premier Fine Art Gallery, presents "Beyond Words", an extraordinary collection of contemporary artworks by legendary songwriter and lyricist Bernie Taupin for what promises to be the single most important art event of 2012 in Houston.  Exhibition previews will run from February 4th through February 12, with special appearances by Bernie Taupin on Saturday, February 11 from 6-8 pm and Sunday, February 12 from 2-4pm.  RSVP: 713.871.0940 or at Off the Wall Gallery.

Now you might be somewhat surprised to learn that Off the Wall Gallery is "Houston's premier Fine Art Gallery," and certainly it seems a bit premature to be bragging about the single most important art event in 2012 (there's going to by an exhibit of Rembrandt, Van Dyck and Gainsborough at the MFAH in June which might give Taupin a run for his money. On the other hand, Rembrandt, Van Dyck and Gainsborough never wrote lyrics half as good as "Island Girl.") Still, shit, I'm definitely tempted by the opportunity to meet the guy who wrote "Philadelphia Freedom" and "Love Lies Bleeding."