Art at the Houston Permitting Center


Do you read Swamplot? (You should--it's one of Houston's most consistently entertaining blogs.) Every year they vote for "the Swampies", voting on various architectural, development, and planning/anti-planning successes and fiascoes in the Houston metro area. One Swampie is "Most Notable Recycling Effort"--a vote for the best remodelling/refurbishing/repurposing project in Houston. And on the top of the ballot this year is the Houston Permitting Center--and the voting seems to be favoring it. (Voting closes on December 27.) Pretty much everyone who has seen this has been impressed. 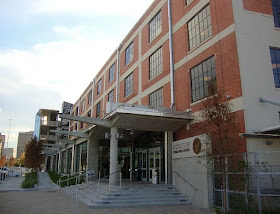 What is it? It used to be a warehouse, and many who saw it described it as an eyesore. It's on the very end of Washington, next to the Amtrack station. The City of Houston decided to turn this building into their new Permitting Center. This is where contractors go to get the various permits they need for building projects. The city hired Studio RED to design the Center. The City devotes a 1.75% of capital improvements to art.  So for an expensive project like this, that's a shitload of money for art. Mary Margaret Hansen won the commission, but it wasn't a single piece of art she put up. Instead, working with 12 artists, she put art everywhere inside and outside the building.

Hansen is a compulsive blogger--she has a personal blog and seems to start up a new blog every time she starts a new project. I like this--it builds anticipation, and informs people about the process and the progress of the project. Her blog about the Permitting Center is worth reading, but reading it as the project unfolded was the ideal way to experience it. 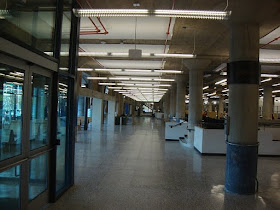 The first art you see on the inside is this:

This is the information desk. Most of the art is labeled, but I couldn't find one for these decorative silhouettes. 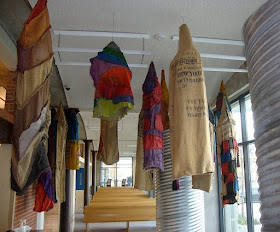 The name plaque for this piece by Kaneem Smith instructs viewers to "please touch."

As I walked further towards the south end of the first floor, I saw these: 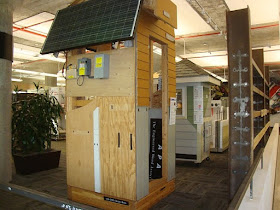 I thought at first they were a large art installation, but what they in fact are are demonstration models of various construction materials. But just behind them is this: 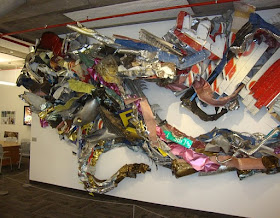 This is the first "indoor" piece I've ever seen by Havel and Ruck. It definitely gives on the impression of flotsam being carried away by a flood. Kind of a weird item for a building that is mainly concerned with building things (although the Permitting Center also issues demolition permits).Even though they are using recycled material in this piece, it seems ironically to suggest that this is the end-state of all this construction that happens in Houston. It's an evergreen notion:


"My name is OZYMANDIAS, King of Kings."
Look on my works ye Mighty, and despair!
No thing beside remains. Round the decay
Of that Colossal Wreck, boundless and bare,
The lone and level sands stretch far away. 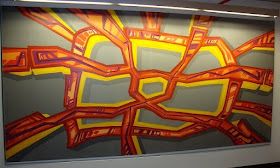 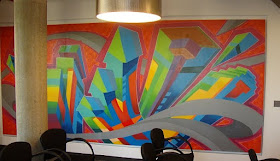 Of the two Gonzo247 pieces, I prefer sunset in the city. It feels closer to a traditional graffiti piece. Also I like the irony--sunset often being associated with a quiet time, but in his work, he implies that the city comes alive at night. It has a jazzy urban feel that in some ways recalls Start Davis. 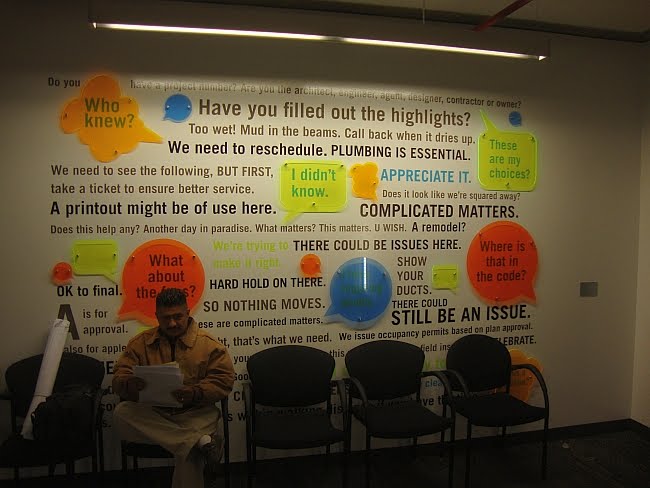 Hansen spent time at the old permitting office listening to the phrases people used. Then she created this word collage out of her research. I've heard through the grapevine that she is irked that they put chairs in front of the piece. No artist likes to have their work covered up. But the Houston Permitting Center is not a museum--it's a working office. Things like this are to be expected. And I thought it had an unexpected aesthetic benefit. In my photograph, it feels like the piece is mirroring the actual thoughts of the guy sitting in front of it with his rolled-up plans and paperwork. Jesse Sifuentes, View from the East, 2011

A lot of the work so far seems to reflect the bustle of both the Center and of the City, which is appropriate. The Permitting Center is about Houston in transition: tearing down, transforming, building up. You hear a soundtrack of chopped and screwed hip hop or grindcore. Not so with this pretty line of magnolias by Jesse Sifuentes.We're still clearly in an urban environment, but Sifuentes is reminding us of one of Houston's glories--its abundant trees.

The most subtle pieces are Geoff Winningham's photos, which are somehow printed on metal.Winningham too shows a quiet side of the city, but with the reflection in the still water, he reminds the viewer that they are in an urban space--indeed in the very heart of the city. The shadows, the reflection, the silhouette of the fisherman all make this a formally complex photograph. For that reason alone, you could sit and look at it for quite a while. But as a portrait of this city, it also seems perfect. It's timeless--one imagines this scene was common 100 years ago, and it wouldn't be out of place in an old Sig Byrd column.

There are several other artworks in the building and outside. The Houston Permitting Center strikes me as an exemplary example of how to use the 1.75% of capital costs for art. And I say this in a city that is full of squandered art dollars (ahem Tolerance ahem Open Channel Flow).