The Part 4: Best (and Worst) of 2011 -- The Houston Art Community Selects their Faves

Monica Vidal, Temple Hive at BOX 13. "I can't wrap my head around all the planning and measuring that goes into Monica's work. The scale of her work is really impressive, and I loved being able to walk into this one (a similar hive at Lawndale was sealed off). Her drawings are also quite nice." That's what an anonymous respondent thought. Maybe Vidal should make a super-giant hive for the West Oaks Mall art space. That would be worth the 20 mile drive to see!

Moving into his new studio. Sometimes the most important art event is purely personal. Earl Staley wrote that his most "memorable event was moving into a studio at 2711 Main St. The rest is noise." That's a great location if you find that you've run out of pthalo green--Art Supply on Main is just downstairs.

Nathan Green, Fill the Sky at Art Palace. An anonymous respondent gave a thumbs up to this show.

Kenn Coplan, Ultimate Kenn at Nau-haus Art Space. One of our anonymous respondents wrote, "Kenn Coplan's solo show was incredibly entertaining. His pieces are crazy. They're so fun to look at and play with. His photography is also outstanding, but I get really excited by his wacky toys and rusty sculptures." 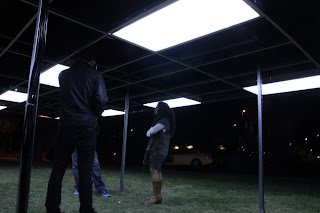 
First Take: Okay Mountain Collective at Blaffer Gallery. This got a vote from Brett Hollis, with no word on whether he joined their cult.

Southern/Pacific curated by Paul Middendorf at Lawndale. "The most successful group show I've seen at Lawndale in a long time. I'm excited to see the next installment of this traveling project." That's what an anonymous respondent wrote about this Portland/Marfa/Houston show.


Susan Plum, Nuevo Fuego at PG Contemporary. An anonymous respondent wrote, "Susan Plum's show is just plain beautiful. All of that sparkling woven glass is mesmerizing. Her work feels both earthy and clean at the same time."

Jillian Conrad, Claire Falkenberg, Ian Pedigo, and Brion Nuda Rosch, Related Clues at Inman. An anonymous respondent wrote, "Well to be honest what i really like at Inman is Claire Falkenberg and Ian Pedigo. [M]ust have been 5 or 6 years ago when I [first] saw [Pedigo's] work. He does some pretty cool stuff, but I'm still not quite sure where he is coming from. First time to see Claire's work--like it so far." I thought Conrad and Rosch's work in this show was also excellent.

To be concluded in part 5!