Before the opening at Rice's Sewell Hall of CATO by Nick Barbee, the artist gave a talk. As artist talks go, it was par for the course. He talked about his journey as an artist. How he got interested in historical figures. How he did multiple portraits of George Washington. How his interest in historical figures lead to historical re-enactments and research. How his research lead him to the play Cato, a Tragedy. How the violence in the play made him think about gun violence. How his thoughts on gun violence lead him to research the trajectory of bullets through a synthetic substance that simulated anesthetized pig flesh, which is the closest thing to human flesh. How the diagrams of these trajectories led him to create the sculptures in CATO.

And then at the end of the talk, he did something extremely disingenuous. He said, "none of this (talk) matters." 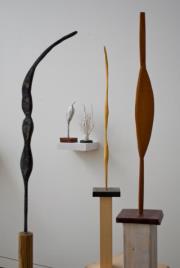 But when I look at these sculptures, which are scaled models of the effect of a bullet fired from guns such as an AK-47 or an M-16 or a shotgun, I think how can Barbee's talk not matter.

If Barbee's purpose is to abstract violence (in this case gun violence) by stripping away details--in this case the body--and presenting only the violence--in this case the trajectory of the bullet through the body, that is the wound, then he may have succeeded. However, I lack the experience (thankfully having never been shot by an assault rifle) to intuitively, viscerally "get" his work. By dismissing his context, Barbee relegates his work to a form of abstraction in which one strips away the details to get to the essence of an object, its platonic forms. That worked for Cezanne, Picasso, Braque and others because they attempted to abstract common objects and experiences familiar to their audience.

Barbee's subject limits the audience's experience of these works in that same intuitive manner. Unless it is being shown at Walter Reed Hospital rather than Sewell Hall.

Sometimes words make all the difference.