Can I have some art with my sliders?

I went to a birthday party last night at Natachee's, a kind of greasy funky concept restaurant near the Continental Club and Sig's Lagoon. And at one point in the evening, I had to take a leak. I walked into the men's bathroom and say this hanging on the wall next to the urinal: 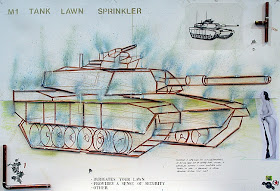 
That cracked me up. Over at Goode's Armadillo Palace, where everything is decorated with an antique Western/Texas theme, there is a print in the men's restroom of a naked woman holding a poker hand. It's old (or at least designed to look old) and therefore not particularly prurient. But it's a obviously a piece of art for men to see, with two manly sins in one image. Stuart Davis painted a mural for the Radio City Music Hall men's lounge called Men Without Women, which included images of sailing, horse racing, a cigar, a barber shop, etc.

The Art Guys go for the manly here--a giant war machine, a nude pin-up figure holding a rifle, and lawn care. It is perfect for a men's room, a post-modern update of the poker-playing saloon girl or Men Without Women. 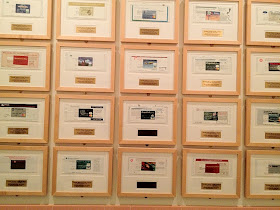 This is hanging on the wall just outside the restrooms. The Art Guys responded to every credit card solicitation they received in 1997. These were all the credit cards they received. I'm going to assume they cancelled them before displaying them, because the credit card numbers are all real and visible. In any case, they still might be tempting to a not-too-bright thief.

Of course, what appeals about this is the mindless repetition of responding to every solicitation. It seems like an inherently absurd act--but no more absurd than sending out all those solicitations. You get these in the mail constantly and you don't even really think about them as you throw them away. The Art Guys make you think about them by carrying them to a logical extreme.

I asked if there was an Art Guys piece in the ladies' restroom. Alas. no.