Dale Yarger was a graphic designer who was an important figure in the cultural scene in Seattle for decades. He designed the original Sub Pop logo before it was even a record label. Bruce Pavitt (one of the two founders of the label) wrote a column for The Rocket, a music newspaper which Yarger worked for. The way I heard it (and if anyone knows better, please feel to correct me--I'm relying on my extremely imperfect memory here), Yarger designed the logo with "SUB" above "POP" and little arrows between the letters, and then it was slightly changed when they made it the official record label logo.

When I think of a city's cultural scene, I rarely think of the graphic designers as being a particularly prominent part of it. (Sorry all you graphic designers out there!) But in Seattle, graphic designers with strong, individual styles were quite important to how Seattle expressed itself. Helene Silverman, Art Chantry and Dale Yarger were probably three best known designers, and The Rocket was where they made their mark (although they worked with other publications, as well as doing posters, etc.). Seattle was a good place for a designer to shine for two reasons. First, the music scene afforded lots of opportunities to design posters, flyers, etc. (And these were the kind of things that people saved and remembered.) Second, there were many local publications--The Seattle Sun, The Seattle Weekly, The Rocket, The Stranger, and hip local publishers like Real Comet Press and Fantagraphics Books.

I got to know Dale when he worked for Fantagraphics. He got hired shortly after I did. I think he was tired of the freelance life and looking for a change of scene when he came aboard as art director, He was massively overqualified for the job.Being designer for Fantagraphics was a labor intensive job. Not only did he have to design zillions of book covers, he had to design pretty much every single page of The Comics Journal--and that's a lot of pages. (By the time I left, the art department consisted of Dale at Art Director along with Pat Moriarty, Jim Blanchard, and Roberta Gregory. Design interns over that period had included Stefan Dinter, Jason Little and Jason Lutes.)

Fantagraphics through its first few years had pretty terrible design. It started to improve when Yarger's predecessor, Dale Crain, became the art director (he went over to DC to become their book designer). When Yarger joined, he redesigned everything from scratch. Some of his favorite things were using duotone, blowing images and type up to give it a ragged look, and taking black-and-white line art and using it as halftone.

Here are a couple of projects we worked on together. The Best Comics of the Decade:1980 to 1990 was  sort of a manifesto. The 80s had seen an explosion of new art comics, but it was quite scattered. We wanted a book that would provide a decent sampler of this work for the person who didn't have the wherewithal to seek out the original publications--which would have been quite hard. But more importantly, we wanted to say that the art of comics exists not in the assembly-line-produced corporation-owned comics of Marvel and DC, but in alternative comics, experimental comics, highly personal comics, etc.We had work by 62 cartoonists. For some reason, we decided to publish it in two volumes. (Perhaps we thought published a single 248 page volume would have been asking too much from our customers, who were used to paying a buck for a comic book. Things have changed a lot since then.) So we commissioned five artists to draw us four pictures of some of their iconic characters. (Gilbert and Jaime Hernandez collaborated on a drawing; the others were by Robert Crumb, Bill Griffith and Matt Groening.)

But the challenge was to somehow indicate that there were a lot more cartoonists in each volume. Here's how Dale did it. 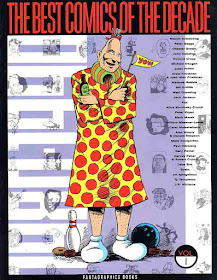 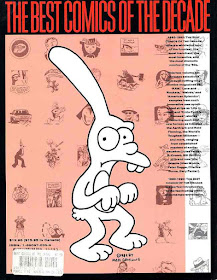 The Best Comics of the Decade volume 1, back cover. Illustration by Matt Groening. Art direction by Dale Yarger. 1990 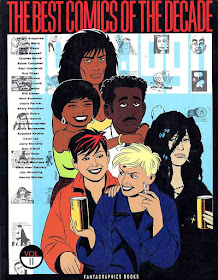 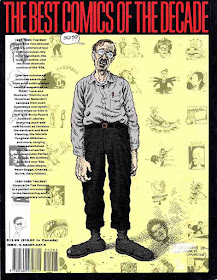 The Best Comics of the Decade volume 1, back cover. Illustration by Robert Crumb. Art direction by Dale Yarger. 1990

You can see behind the figures in the foreground are a grid of images. These are images by the other contributors, taken from their published work. By reproducing them in a halftone (as opposed to the black-and-white line art that they originally were), Yarger made them recede. They become part of the pattern behind the central figure.

Now all you younger designers might be thinking, big deal? Aside from this being an elegant solution, keep in mind that these covers were done before Quark, before Photoshop, etc. The desktop publishing revolution was just around the corner, but it hadn't hit Fantagraphics yet. So that means that he shot each of those images with a stat camera, cut out the parts he wanted by hand, waxed them (so he could paste them down), and pasted them on a sheet of clear plastic, which he then attached to an lay-out board with a tape "hinge" and instructions to the printer to print this layer in black at 30%. And that was just one of the many hinged overlays he created for this cover. (The text that reads "1980-1990" for example was not typeset--Yarger hand-cut those numbers out of a rubylith overlay.)

Now after we published this, Seattle's Center on Contemporary Art approached us to curate an exhibit of comics art. They could see that we were doing something different with comics--treating it as an art form. We decided to build on the Best Comics of the Decade, doing a group show primarily consisting of the artists in the books (a few were changed, but the two projects mostly overlap). I helped curate the show and I edited the catalog. Again, Yarger was the Art Director, and we worked closely together on it. 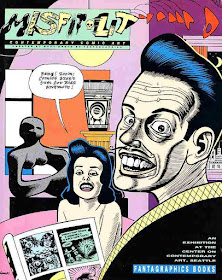 Yarger was enthused about this project. In fact, he came up with the name of the exhibit. One afternoon we were brainstorming names. Yarger went off to his drawing board and tossed out a dozen or so names, including "Misfit Lit". Then he created a logo for the show that I think works great. Each letter is a piece of hand-drawn display type from a cartoonist included in the show. (This is his way of indicating visually that this is a group exhibit.) Yarger gives the logo a kind of urgency by leaning each letter to the right--the logo threatens to tumble off the page. 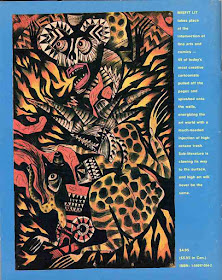 The interior consisted of an essay by Robert Rodi, a brief oral history compiled by me, and biographies of all the artists. Yarger designed all the pages. One completely weird (but typical for Yarger) thing he did was to spell out the page numbers and place them almost randomly in the top of the page. 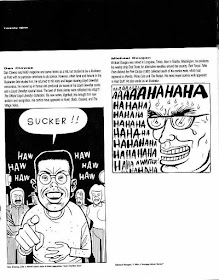 This page works especially well because of the two pieces of art Yarger chose. Unlike a regular exhibit catalog, we felt it was OK to use art that wasn't strictly in the show. It was meant to be an example of the artist's work. But the combination of the evil character calling you, the reader, a "Sucker" juxtaposed with the Michael Dougan face hysterically laughing was perfect. 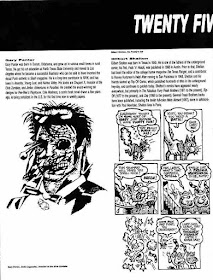 Here, Yarger blows the page number up so much that you can see the imperfect edges, and then goes further by letting it hang off the side of the page. This was the kind of design craziness he would do if given half a chance. It was a beautiful thing.

Dale died Saturday after a long battle with cancer. Dale was a great co-worker, collaborator, mentor and friend when I worked at Fantagraphics. His work for Fantagraphics is just a small part of his life's work. You can see more at his portfolio website and at his Facebook tribute page.