What I did at the Lone Star Explosion Biennale: Day 2

I'm going to categorize Day 2's theme as dicks and death. This day's performances took place at Avant Garden. It had rained like it was the second great flood. I was late (I can't stand the rain...or blame it, but I will) and stomped through the rain to an almost empty Avant Garden with a wall size projection of chocolate-smothered penises and breasts and a group of people singing "we shall over come." I stopped in the middle of the bar and waited for Woody Allen dressed as Noah to step out of the bathroom with two sheep in his and hers leather corsets. It didn't happen.

Later, I watched the video of the performance, Brown, later. It's an interesting piece on religious and racial prejudice. And although, I like nudity and I like rants against prejudice of all types I couldn't fully integrate  Jonatan Lopez's monologue with the chocolate cake painting or the nude artists. Perhaps, it was just the chosen sexual metaphor. If I get to choose my sexual metaphors--and I don't--I prefer women and savor substances with my sex. In my opinion, Trix and super-sweet chocolate syrup are for kids...or maybe just dicks.

The video projection ended and everyone came down from the second floor where the performance took place. Next, the video switched on to a live performance by Marcus Vinicius from Brazil. He stood with his arms bound in a contorted framing of his head and held a burning candle that slowly dripped wax on his back and down his shoulder.

My first impression made me think of the prisoners of Guantanamo. Then my art consciousness kicked in and I had an Abramovic moment. If I morph the two together in the recess of my brain, I get a realistic portrait of Dick Cheney as a demon child. I'm not sure that's the visual impression Vinicius was aiming for, but I'm confident it was the political one.

After the approximate 10 minute streaming video performance, Non Grata took us outside for a Texas history lesson. I'd like say I got brave and participated, but actually I just got coerced. A member of Non Grata put a cone shaped plastic bag on my head and pushed me into the garden with the other audience member-lemmings.


And then Non Grata members began to burn things: a plastic army man to symbolize the military and war, a tablet of the last supper to purify us from religion (which was taking a beating this evening along with dicks and death), and food, which symbolized either "food" or the entire industrial, commodified food supply and distribution network. The proselytizing was a little pedantic and obvious, but in times like these, sometimes the obvious needs to be stated and underscored with pyrotechnics.


The pyrotechnics were awesome. Sometimes, I just can't help enjoying a good burning.

Somewhere in here there was an intermission. I spilled someone's drink and then got a glimpse of the pending Apocalypse, Hello Kitty with a pitch fork.

After the fires were extinguished, the audience moved upstairs for Elena Nestorova's performance. She began seated on the floor playing a very small, tinny-sounding harp-like instrument (hows that for musical approximations). After a while, a man with his head wound in cloth emerged from the audience and crawled to her. He then rose and she took the end of the cloth. He slowly began to turn in circles unwinding the cloth from his head while moving among the audience. Deliberately. Precariously.


Then Elena and her male performer wrapped the cloth around the eyes of some of the audience members in the style of a blind fold. 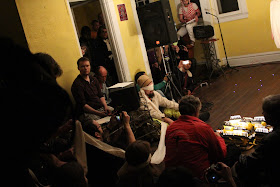 After the blindfolding, Elena and her co-performer went onto the balcony where an inflated balloon with an LED inside was secured to the railing. They untied the balloon and released it into the overcast sky. The audience watched the glowing orb disappear among the clouds. 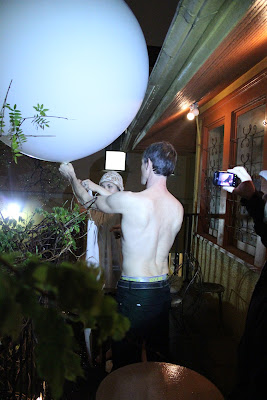 It sounds simplistic. It was. It was also elegiac.

After Elena's performance, I went downstairs to the bar and watched the Free Radicals set up for the after party until someone started wandering through the crowd shouting something along the lines of go upstairs if you want to touch death. I flashed back to Monty Python's bring out your dead scene from Monty Python and the Holy Grail. Having already worn a plastic prophylactic on my head in the name of artistic participation, I thought, why the fuck not? I queued up. An assistant guarded the door and let us go up in groups of five to the 3rd floor of Avant Garden, the attic. There, we confronted death.

Death in this instance was wearing it's Egyptian guise, appearing as Anubis, the god associated with mummification and the afterlife.
Audience members were encouraged to touch, caress, kiss, and confide in Death. Given this directive, I struggled with my inner catholic nun. To touch or not to touch. I'd approached the attic in a Monty Python-esque mood, but shifted to a more somber one almost immediately upon entering. Let me just say that what happened between me and death stays between me and death...and of course five other people who were brave or drunk enough to join me in my experience of this performance. However, I will admit to lighting a candle. Then I got my black mark that proved I'd touched death and joined the living down below at the bar for a drink that was strong enough to pickle my innards even if it wasn't strong enough to fortify me against death.