Simultaneous with Frieze were two smaller art fairs, Pulse and NADA. Just as Frieze was the first really major art fair I had ever attended, Pulse and NADA were the first two satellite art fairs. Pulse was held in a place called the Metropolitan Pavilion, and unlike Frieze (but like the rest of New York) it felt pretty cramped. (Frieze's facilities were so nice that I'm spoiled for any future art fair I may attend.)

Walking in, the first gallery that caught my eye was Torch from Amsterdam. The work at Torch seemed so stupid and so crass that it colored my view of Pulse. It was only as I edited my photos that I realized I actually liked a lot of the work I saw there. But let's start with Torch and the work I hated. 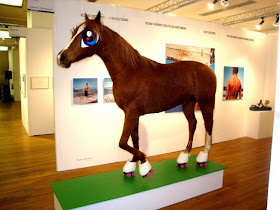 In a post titled "An Early Pulse Highlight: We Are So Close To The End of Civilization,"Art Fag City wrote, "Notice the giant anime eye and roller skates on this taxidermied horse, shipped all the way from Europe. This is our Nero fiddling." Nuff said! (The artist's name is Tinkerbell, which speaks to the gravitas of her work.) 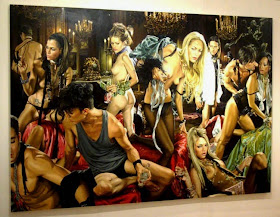 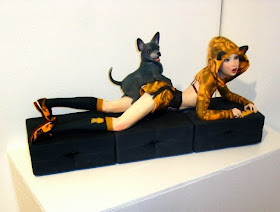 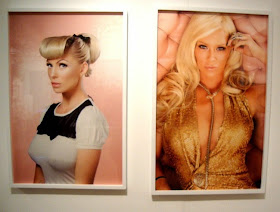 I guess there is some value in Susan Anderson's work--portraits of people who are disturbingly unreal (despite being quite real). But in the context of Torch Gallery, these portraits seem like pandering.

And Torch, while notable for this, wasn't the only gallery playing with cheesy sexiness to sell art. 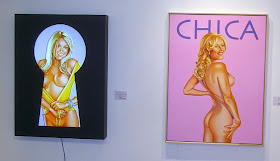 I have always kind of liked Mel Ramos. His 60s-era paintings seemed clever in their combination of cheesecake girly images and banal consumer products. They seemed like genuine social comments. And I probably was willing to accept the sexism because it seemed retro. But it only seemed retro because I was seeing them at least a decade after they were painting. These more recent pieces show what I never realized before--Mel Ramos is painting the modern conception of a pin-up girl in whatever decade he's working. So these women, painted this year and last, have big fake boobs and modern hairstyles. And looking at Mel Ramos's website, it doesn't seem as if he's had an original idea in nearly 50 years--not at least since he first thought to combine pin-ups with consumer products. But Hell, the dude's 77 years old and has been painting nekkid ladies since 1960 or so. He ain't gonna stop now. And as I pointed out above, there has been and always will be a market for it. 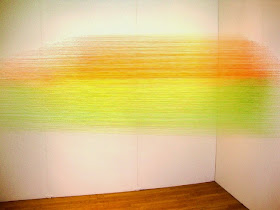 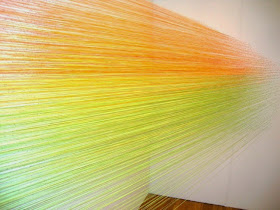 But now that I have had a chance to reflect and look at my photos, I realize I didn't hate everything at Pulse. There was a lot I liked, like this thread installation by Anne Lindberg. 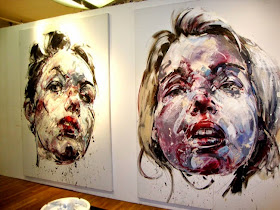 Philippe Pasqua's enormous portraits make his subjects look like they've been through hell--they seem battered and bruised. I liked his vigorous technique.

I also liked the painterly style of Ralph Fleck. 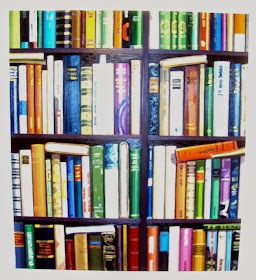 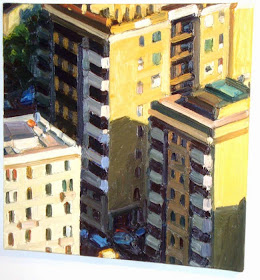 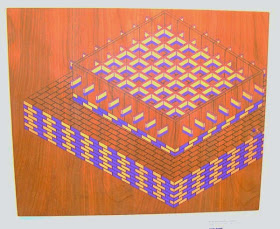 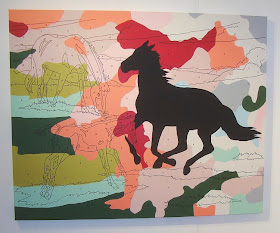 Trey Speegle had this "paint by numbers" works at Benrimon Contemporary. What I liked was that paint-by-number outlines didn't match the abstract underlying color scheme, and neither fit in with the silhouetted horse. 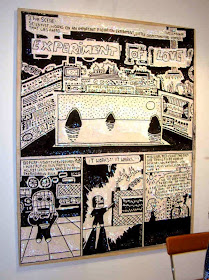 I was intrigued by Experiment of Love by Daniel Gonzalez. It's a page from a comic book drawn in a fairly crude style, but a style that would not be completely out-of-place in an art comic or mini-comic, where deliberate amateurism can be an aesthetic strategy. The weird part is that this piece was made with sequins. I wonder if Gonzalez drew this comic and transferred it onto canvas, or if it was "appropriated." 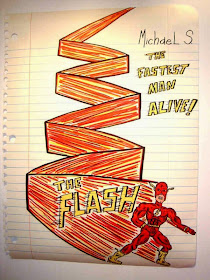 Michael Scoggins, The Flash, 2012 prismacolor and marker on paper at Diana Lowenstein Gallery

Another artist who plays with deliberately crude drawing is Michael Scoggins. This drawing of The Flash is meant to look like a young boy drew it in his notebook. The thing you can't see here is that this piece is huge--67 x 51 inches. So Scoggins carefully reproduces a torn-out spiral notebook page six times normal size. 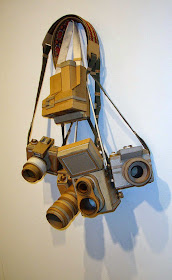 These cardboard and canvas cameras by Kiel Johnson are all individual pieces, but I liked the display concept of hanging them all together, as if they were real cameras hanging around a photographer's neck.

I will continue discussing Pulse in a second post--where I'll discuss my favorite part of the fair, the Impulse section.