The Spy Who Felt It

DISCLAIMER: Before you read this review, there is something that you should know. I sleep with the artist that I'm about to review, Sasha Dela. Not every night and not always at the same time, but I rent a room at Skydive and she rents a room at Skydive, and we sleep. If either of us make hundreds of millions of dollars directly or indirectly off either the exhibit or this review, I'll feel bad. But not too bad. I'll cash the check. I can't speak for Sasha. (She's tied up at the moment.) Enough said.

When I was in elementary school, I read the book I am the Cheese by Robert Cormier. It's basically a story about a boy whose parents, and thus his life, are not what they seem. The novel is his discovery of the deception. At the time, I was young enough and ignorant enough to not really know what my parents really did for a living. Plus, like most kids my age, I thought my parents were nerdy and clueless. I fantasized that I was adopted and that my real parents were the Vanderbilts or the Rockefellers. It had a profound effect on me...although I was not really sure what it was until I saw Sasha Dela's Emotional Life of a Spy at the Art League.

The exhibit is an installation, which comprises two videos, a couple of sculptures, and several photos and paintings. The primary video is Dela's interpretation\recreation of Alfred Hitchcock's 39 Steps, but with the artist's own personal associations and observations weaved into the narrative. So much so that it plays out like a melodramatic (emo if I'm going to be current) version of Mystery Science Theater 3000.

Both are postmodern appropriations. MST3k uses the original unadulterated movie and adulterates everything. Dela appropriates scenes of Hitchcock's movie and represents them through the prism of her interpretation.

Through Dela's prism of personal experience, we learn that the photo of Mrs. Smith looks like her Grandma. 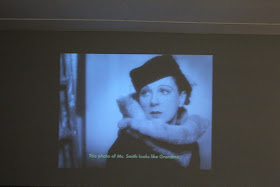 She refers to the protagonist, Hannay, as a Hitchcockian icon. 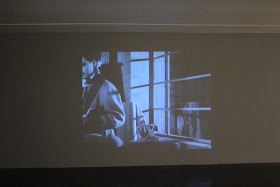 Then Dela goes beyond the meta-descriptions to intertwine her own narrative. At one point she claims to "...(feel) more lost than ever". We learn of Dela, "Not that I am innocent nor on the run." A phone rings and goes unanswered and she states "Love is always calling and loss never leaves." Even later in the film, she pronounces "We are always running, mostly in circles."

The rest of the installation serves as the supporting cast. 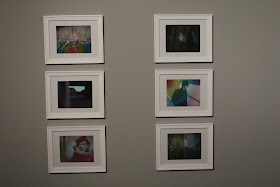 In the retelling, Dela uses mandala's in transitioning between some of the scenes. These mandala's are reproduced on canvas. 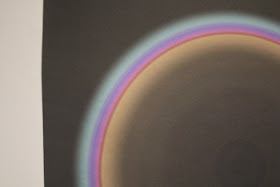 She also uses a ready made sculpture of phones and two candles with a shared wick to underscore the sense of connected-ness that permeates both her retelling and Hitchcock's original. 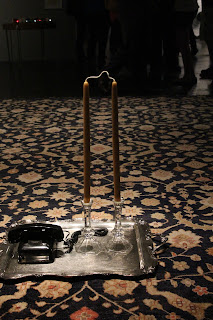 Dela's phone motif is interesting. In this day of connected-ness, she associates it with "love always calling" and loss "never leaving". It made me think of a recent study conducted by TeleNav, which revealed that "One-Third of Americans Would Choose Cellphones over Sex" for a week. It could be the techno-sexology of the Apps, but I suspect that it's the immediacy and intimacy that cell phones afford us, which is more enduring (24x7) and more dependable than sex.

The sense of mystery and things not being what they seem is reinforced by another sculpture which consists of a standard bedroom bureau with a large screen playing an abstract video secreted away in the bottom drawer. 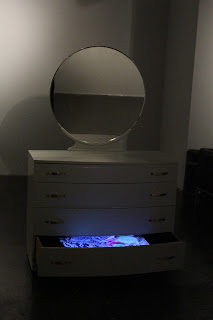 What the installation achieves is a gestalt of mystery. It is not one of sleuths and spies, but of emotional ambiguity in which one is not necessarily innocent, in which one runs, in which one doesn't dare answer the phone. And of course, one has no idea what's going on and yet knows exactly what's happening. The antiquated objects: the rotary phone, the candles, the mandala, the 60's bureau, the Hitchcock film would give the piece a dated or passe feel. However, the explicit theme of an emotional life and the supporting sub themes of searching (every mystery is a search), love, loss, connectedness place it in the present. Together the two imbue the work with a timeless quality because these themes are "always calling...never leaving."

Experiencing the installation, I had done nothing and yet I was guilty in that I had assumed the retelling's emotional burden. It felt like a secular original sin. Of course, I'm waiting for my redemption, which means either that I'll satisfy the sub themes in my life or simply settle for a Rockefeller to text me about my one truth birth right and my inheritance.

I might even give up sex for a week for that kind of validation. Too bad there's not an App for that.