I've never been to either a transitional art opening or an afternoon tea. Having attended Afternoon Tea with Lisa Chow and Y.E. Torres at the Fresh Arts Gallery, I can now check both off my list along with petting an evil bunny, stroking a unicorn, and having impure thoughts about a pink Care Bear.

The premise of the tea was to serve as a second (or perhaps re-) opening of Chow and Torres' show "Once There Was, Once There Wasn't." It served to not merely introduce Y.E. Torres work into the two person show, but actually added them into the space. On July 14, 2012, Chow installed her work and decorated the space like she owned it--all  fairy tale princess and pastel streamers. Her aesthetic reigned supreme. Two weeks later, Torres invaded her space. Rearranging the streamers, inserting her Bad Unicorn self among Chow's serenely fantastical works, and shifting the asethetic from the sublime to the sensual.

Both artist work in fantasy. Where Chow's works are archetypal fairy tale scenes of children and animals, Torres works are dank and earthy. 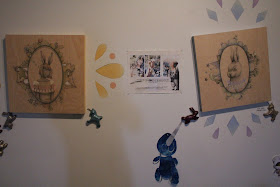 Lisa Chow's work getting f'd up by unicorns

Chow's figures are literally outlines of childhood. If I'm feeling analytic, I'd characterize them as idyllic and abstract. If I'm just feeling, I'd label them as faceless or anonymously menacing. Chow's explicit intent seems to be to invoke nostalgia about childhood through fantasy. However, the anonymous nature of the works gives them an unsettling, disquieting tone that informs nightmares of the same setting. Everything is idealized, but not in a good way. It lends itself to "pretty bunny, ouch that's not my bunny" experiences. Chow's works sweetness doesn't satisfy but unsettles because their world view is both perfectly rendered but lacking.

Torres dwells in a different, more sensual subdivision in fantasyland. Her conceits of the Evil Bunny and Bad Unicorn veer into the real, the sensual. Here creatures have toes and nipples and funk. 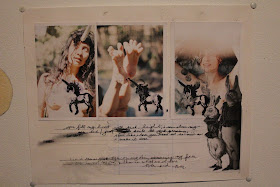 This bunny bites. This unicorn pokes. In Torres' world, not only women bleed. Beloved animals, the subjects of Chow's fairy tales, get fucked up. Their horns get broken off, and then their cute little heads get mounted on the wall. 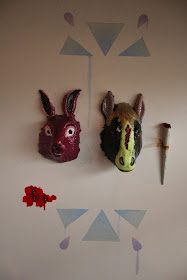 Nevertheless, the two artists aren't that different. Torres shouts what Chow whispers. We can allude to all things the passions and humors (sex drive, sensuality, fertility, etc.) through symbols such as bunnies, but we won't directly speak of them. In polite society, one puts on white gloves, drinks tea from cups of bone china, and giggles and snickers at each other's clever bunny banter. The less polite get a little more gritty but with similar symbols and euphemisms. Torres echoes Chow's sentiments, she just does it more stridently. She's peddling the same products as Chow: pets as symbols of intimacy, security, emotional fulfillment. With Torres' work, the fantasy becomes more adult-themed and the pets serve as stand-ins for pussies and penises, but these are nothing more than anthropomorphic symbols (and simplifications) of the same desires of Chow's characters. The urges, wants, needs, and cravings are categorically similar but their superficial targets change. The contrast in styles emphasizes the similarities between the two artists. 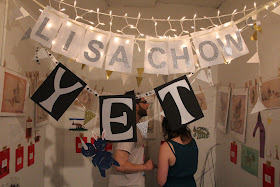 They can't even agree on the font for their signage

The Tea Party theme is a clever way to mash-up the two aesthetics. Chow's approach covered the High Tea\Little Girl Tea party. Torres brought in the Alice in Wonderland crowd. If you weren't sure which trope to take, there weren't any pills or cake to make you small or tall, but Texas Tea was provided to aid the decision making process. 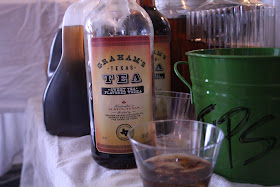 Not knowing what to expect, I stepped out of the midday heat and into a menagerie: unicorns, bunnies, bears, women in tea dresses, and old-school freak flag fliers. A bowl by the bar containing packages of confetti and masks implored guests to "please wear a mask" as if to encourage "safe" fantasy\role playing. So, of course I did. 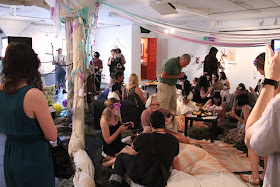 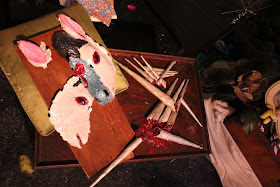 I got a drink and attempted to circumnavigate the exhibit, viewing the art and gawking at the guests. 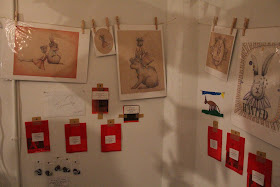 I worried that this could be as flat as a Lone Star beer left out in the sun. My fear was unfounded. Chow and Torres and the folks at Fresh Arts\SpaceTaker did not fizzle out. Both artists dressed according to their aesthetic. 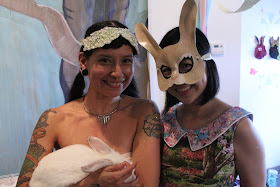 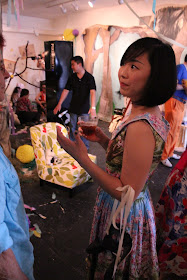 Friends of the artists and members of the performance arts group Continuum dressed up in costumes and got into character, so much so that I couldn't interview them because I don't speak unicorn or bunny. Journalistically frustrated, I did the next best thing. I stroked the unicorn and petted the bunny and categorized it as an artistic communion. (Law enforcement officials and the performance artists' loved ones may not have the same interpretation.) 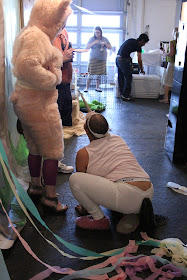 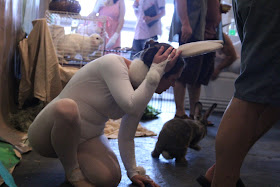 The artists also convinced a local rabbit rancher to bring two of its hares. The rancher proudly proclaimed that he ate all the meat that he raised and that rabbit pellets made excellent fertilizer. Then, when Torres tried to hold one of the rabbits, it scratched her on the chest. Once it realized that she wasn't going to eat it, at least not right then, it chilled out. 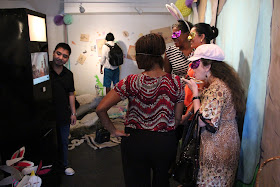 The party included a digital photo booth, which similar to the other accoutrements, blended the two aesthetics and their aficionados. Suits (or their summer time equivalents) flirted with fantastical creatures. Patrons posed with artists, and strangers took their Texas-Tea inspired turn at the photobooth. 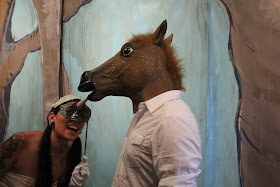 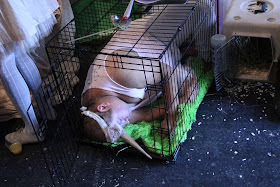 One too many rainbow treats 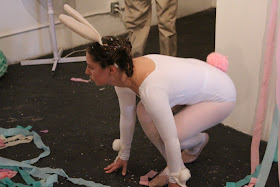 The tea party concluded with Jo Bird of Two Star Symphony playing a piece on the toy piano and then two pieces on the viola. Her final piece was about a rabbit. At it's conclusion, she invited us to determine whether the rabbit lived or died. 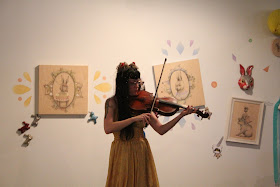 I couldn't tell for sure, but whatever happened to it in the end, it had a fun time getting there.